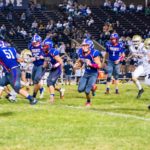 PORTSMOUTH — Believe it or not, what you saw from the Northwest Mohawks on Saturday night was indeed a bonafide passing attack.

That’s because the heavy run-oriented Mohawks – which almost always operate from their distinct double-wing and tight foot-to-foot line splits formation – went to the air early and often against the Notre Dame Titans, and succeeded.

Austin Newman attempted 11 passes, and threw two touchdowns while completing two others of at least 26 yards, as the visiting Mohawks handled the Titans 41-12 inside historic Spartan Stadium in Portsmouth.

With the victory, on Notre Dame’s Homecoming night, the Mohawks snapped a two-game losing streak – and evened their record to 3-3.

The youthful yet undermanned Titans, donning their white throwback uniforms which celebrated the 1967 and 1970 state championship squads, remain winless at 0-6.

The contest marked the Southern Ohio Conference Division I opener, as Northwest – with overwhelmingly winning the numbers game now in the SOC I – was going against the 25-man Titans.

Speaking of retro, while Northwest did succeed, and even surprise, some with their opening up of the passing playbook, they still ran the football with precision – amassing 283 yards on 42 carries.

In fact, a half-dozen Mohawks had at least three carries, as – with the score at 41-6 and the Ohio High School Athletic Association’s running-clock rule in effect for six-and-a-half minutes – several players had the opportunity to touch the football at least once.

Northwest even showed some traditional running formations, but its base is the two tight-end appearance with everybody within a few feet of one another along the line of scrimmage.

But the first point addressed with first-year Northwest coach Bill Crabtree was the Mohawks’ passing game.

“We changed things up and threw the ball a little more tonight. We need to have success with that, and the passing game will open up the running game for us,” he said.

It definitely did on the Mohawks’ opening drive, which was the game’s initial possession.

With Northwest facing a 3rd-down-and-17 situation from its own 21-yard line, Newman threw a high downfield pass to Nathan Rivers, who out-jumped his Titan defender to make the nice catch for 27 yards. 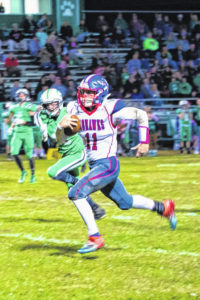 Campbell, who rushed for 101 yards on only nine carries – ran in from eight yards on the next play – as Dakota Secrest kicked the first of his five extra points.

The Mohawks then forced the Titans into their first of three first-half three-and-outs – and this time drove 70 yards in 10 plays in four minutes and 18 seconds.

All but one of those plays were runs, as Newman called his own number from two yards out at the two-minute mark.

With Secrest’s second extra-point kick, the Mohawks had 14 points – all they ended up needing for the win.

On Northwest’s next series, it needed just two plays and 55 seconds to score again – and go up 20-0.

Newman connected with Campbell for a deep skinny post pattern, hitting him in stride and ahead of the Notre Dame defender for a 59-yard touchdown strike.

As Newman completed six passes for 136 yards with two TD, and Rivers rushed for 64 yards on a dozen attempts including two touchdowns on short third-quarter runs (one and seven yards), Crabtree praised the play of his young offensive line.

The Mohawks had a size and obvious depth advantage on the Titans, but they still have to execute and improve upon every snap.

Northwest never punted on Saturday night, never committed a turnover, and doubled up the Titans in first downs 24-12.

The Mohawks made it 27-6 by scoring on their fourth consecutive series to start the game, as Campbell picked up 25 yards to the Titan 30 – for Northwest’s largest running gain of the night.

They needed just seven plays and two-and-a-half minutes to score again, as Billy Crabtree capped the march with a 13-yard touchdown reception in the front corner of the end zone.

Secrest kicked his third extra point at the 2:17 mark of the second quarter for the three-touchdown (27-6) advantage.

“Our offensive line is doing as well as we can ask for up there,” said Coach Crabtree. “They are big and strong up front, and Austin is getting more comfortable throwing the ball. It’s coming together for sure.”

Not to be overlooked was Northwest’s defense, which limited the Titans to 163 yards.

Notre Dame needed to stay close early in order to have an upset opportunity late, but the Mohawks held its run-oriented offense to only 54 yards on 22 carries in the first half.

“Our defensive line is really coming along and we’re rotating a lot of guys in there, sometimes six or seven. We want to keep everybody as fresh as we can,” said Crabtree. “We definitely have a numbers advantage on a lot of these SOC I schools, but it’s a blessing and is paying off for us. We need to take advantage of our numbers.”

The Titans picked up five first downs, and quarterback Jake McGuire snuck in from a yard out on 4th-and-goal at the 4:51 mark.

The Titans twice turned the ball over on downs in the third period, but didn’t give up and stopped the running clock with 5:23 remaining.

It was another six-minute scoring drive, covering 65 yards in 10 plays and ending with Logan Emnett scoring from four yards away.

Emnett amounted 78 yards on 15 carries to pace the Titans, as McGuire carried 11 times while completing two of his six passes.

Beau Hobbs – who had 46 yards on 12 rushes – had one reception for 17 yards, while Caleb Nichols made a good diving catch going out of bounds for 15 on the Titans’ second scoring series.

Notre Dame’s second touchdown gave it 38 points for the season, although the small-school Division VII Titans have now allowed 247 – as their last three opponents are the OHSAA equivalent of at least Division VI.

Notre Dame travels to Green on Friday night, while the Mohawks – a consensus favorite for the SOC I title – host Sciotoville East (1-4) in their second game since the sparkling renovation of Roy Rogers Field.

Northwest successfully shook off the outcome of its first game there – a 21-14 overtime heartbreaking loss against archrival Valley.

The Mohawks have the primary goal of capturing the SOC I championship, and – with some fancy passing on display on Saturday night – took that first step.

“We’ve talked all week about nothing else matters now except winning games and doing things right in the conference,” said Crabtree. “The kids overcame the heartbreak with Valley last week, came out tonight and responded well for the first conference victory. The kids are working, the kids are getting better, and they are gaining confidence. We’re focusing on one game at a time.”

LANCASTER — The best news for the Notre Dame Titans on Saturday night was that a long night was at least, mercifully, made much shorter.

Trailing 48-0 at halftime to the host Fisher Catholic Irish, both head coaches and the game officials agreed to shorten the second half to two four-minute running-clock quarters.

Yes, you heard that correctly, as unheard of it as it may seem.

But at least the Titans took some advantage of that shortened second half, which lasted exactly 20 minutes in real time, unlike what the undefeated Irish did to them for the first 24 minutes of actual time on the clock.

An undermanned Notre Dame squad was simply overwhelmed by Fisher Catholic, as the Irish amassed the first 55 points en route to a 55-6 rout in a non-league tilt inside Lancaster’s Fulton Field.

“We got exposed tonight,” said Notre Dame coach Bob Ashley. “Our youth got exposed and our lack of being physical was exposed. You can’t be that way up against a team as good as Fisher Catholic is. Our hats are off to them. They played the game the way it is supposed to be played.”

The loss left the Titans winless in three games, as they have now been outscored a whopping 130-12.

And, thanks to the decision to shorten Saturday night’s affair, it could have been worse.

The Irish scored on all eight of its possessions, and needed just one play to post all the points it would need for the win.

It finished with 55 including 48 first-half points, seven of which were off the foot of placekicker Ollie Hill.

The Irish amounted 371 rushing yards on 29 attempts, scoring seven of its eight touchdowns on the ground, including two apiece by Trey Fabrocini (41 and 12 yards), Nick Krooner (17 and 11) and Connor Swartz (two and nine).

It hit for 299 yards on 21 rushes in the first half, as the eight-minute continuous-clock second half featured Fisher running the ball eight times for 72 yards, including a 3-yard score by Caden McColley with only two-and-a-half minutes remaining.

Seven separate ballcarriers toted at least twice for 13 yards, as Fabrocini led the way with 88 yards on five carries and McColley chipped in with 84 on six.

Fisher Catholic quarterback Kaden Starcher completed both of his pass attempts for 26 yards, with both passes coming in the first half’s final 5:53.

Colton Yeager made the first reception for 22 yards, then Starcher found Swartz for a four-yard touchdown toss to complete the first-half scoring with just six seconds left.

In scoring those 48 first-half points, the Irish forced the Titans into two lost fumbles and four three-and-out punting situations, as Notre Dame didn’t cross midfield until late in the first quarter on its fourth possession.

When it did, it was an 11-play, 46-yard drive that picked up three first downs, but unfortunately it ended when a measurement marked the Titans just inches shy of another first down on 4th-and-6 at the Irish 30.

The Titans averted the shutout with just a minute and eight seconds remaining, when Beau Hobbs scored on an 11-yard run.

On the two plays prior, Notre Dame’s only others of the shortened second half, Logan Emnett gained six yards to the Irish 48 before going for 37 to the 11.

The Titans’ touchdown on Saturday was only their second score all season – with the other being a 2-yard run by quarterback Jake McGuire in the season-opening loss against Southern.

Those two extra touches allowed Emnett to finish with 73 yards on 10 carries, as Hobbs had 10 carries for 17 yards.

McGuire rushed four times for 11 yards, and did not complete either of his two pass attempts.

Hill’s extra point, the first of his eight attempts, made it 7-0 – and the rout was already on.

The Titans fumbled on the first play following, and Krooner capped a three-play flag-filled Fisher Catholic series with his 17-yard run.

Speaking of 17, that was the number of healthy Titans that could have possibly played on Saturday night, as Notre Dame’s numbers only opened the year at 25.

At least, mercifully, the Titans’ long night was made shorter with the second half.

“We have to get tougher up front, just compete every play, and hopefully gain more experience as the season goes on. We’re trying to get all of our young kids older,” said Ashley.

The Titans return home, and return to non-league action, on Friday night against Fayetteville.