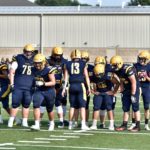 SOUTH POINT – Simply put, the South Point Pointers have nowhere to go but up.

But, that’s a good thing – and already the Pointers are headed in the right direction, per second-year head coach James Gifford.

“We have improved a lot and it’s exciting to see,” he said. “We’ve had four new kids come out to put our numbers at 41. We’ve had 95-percent attendance throughout the summer. The student body is caring about football again. There is excitement in the school about football. We had a great offseason. Last year, I wondered how many people liked football. Not to take away from the ones who loved it already. The kids are starting to encourage parents to take their vacations at a different time. So just the whole attitude of football is really changing.”

Indeed, it all begins with attitude, as the Pointers are coming off an 0-10 campaign.

Last season, surely, was a learning year for South Point – with young players and a new coaching staff getting to know one another.

Now, it’s about improvement in the win-loss column, and gaining confidence in learning how to win games.

“The thing now is learning how to win and expecting to win. We want to expect to win games, not just thinking we hope we can win. It’s figuring out how to do that,” said Gifford. “If we can get a win or two early, that will give us confidence going forward. I think you will see a big difference once we get that first one. A big key for us will be getting off to a good start.”

The Pointers will have a chance to get that first win with their non-league schedule, as South Point plays Piketon (1-9 in 2018) in its season opener – followed by Miami Valley Christian (Division VII) and Alexander (4-6 in 2018).

Gifford, the former coach at small-school Sciotoville East, is also dealing with something he experienced while with the Tartans – a lack of depth.

The Pointers have some at the skilled positions, but not as much along the lines, which in part forced Gifford to switch South Point’s defense to a 3-5-3 base.

“We’ve got a lot of skilled kids, but not a lot of depth up front. Skill-wise, we can go about three-deep at any spot. We want to play fast, because we have some playmakers and that tempo fits our personality. We will have to stay healthy and hopefully develop depth,” said the coach. 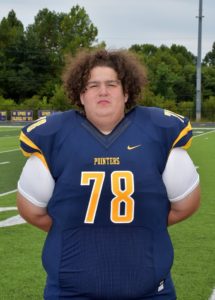 – at 6-4 and 330 pounds – returns at right tackle to provide plenty of height and bulk, as the left side features senior guard Duna and junior tackle Kameron Hardy (6-1, 245).

Hardy and Fetty are versatile and can play any of the three positions, as McCallister comes back at center.

While experience is a benefit for the fronts, depth – at this point – isn’t.

“Basically, the whole offensive line is rotating as the defensive line,” said Coach Gifford. “It’s about keeping them fresh and we really don’t lose anything. (Offensive line) is where we’re thin. We’ve got a good line, but if one or two guys go down, we’re in trouble.”

That line will be blocking for a good rotation of skilled players, headlined by sophomore quarterback Alex Lambert (5-11, 170).

Lambert started some last season, pressed into early service primarily due to injuries.

Gunther (5-10, 150, Sr.), a returning wide receiver and the team’s leader in receptions, is the backup signal-caller. 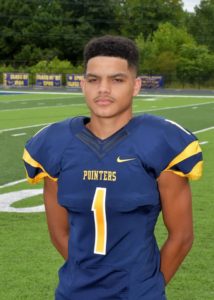 The athletic Gunther is arguably the most important threat in the Pointers’ offense, as other receivers include Pegram, Taylor and T.J. Wong.

He is also back as the team’s punter.

Gallia Academy is the defending champion and Ironton is the consensus preseason favorite, as Gifford gave the early nod to those two.

However, he is well-aware of the difficulty and balance the OVC should show itself yet again.

“The league has great players, great coaches and great teams, It’s going to be a tough, close race, but our kids should embrace this kind of schedule. Playing teams like those should provide a measuring stick to where your program is at,” said Gifford.

And, from where South Point is at right now, it’s a 180-degree turn from a year ago – with nowhere to go but up. 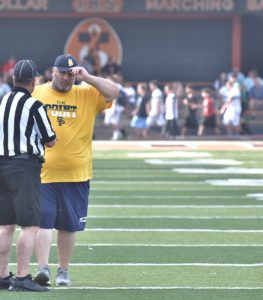 “I’m definitely looking forward to the season. Wins or losses, there is excitement for football at South Point again,” said Gifford. “It’s a great place, and these kids have worked hard, put in the time and absolutely want to get better this year.”