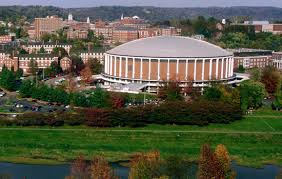 … This one was over before the first 1:13 was in the books ! – the Generals punched the Big Reds in the mouth jumping out to a 6-0 lead as the SHS BIGS took control offensively – Luken Hill (6-5) 6 points in the opening qtr./ Grant Heileman (6-7) 6 points / and swing man Landen Russell (6-1) 4 points with deuces by Ethan Heller/Adam Boyle … 20 first period points for Sheridan … if the offensive effort wasn’t enough the SHS defense turned the Big Reds over 9 times in the quarter while holding SVHS to 4 points in the period … Sheridan 20 Steubenville 4 end of 1 … Sheridan IS the most complete TEAM in the D2 tournament imo – the BIGS of Heileman/Luken Hill inside BOTH have played outstanding basketball the last 4 games – Luken Hill has taken his inside presence/game to another level … Landen Russell (soph) outstanding D, getting the putback buckets down low/ he’s the scavenger type player who does it all including scoring around the basket and from that 12 feet and in range – playing like a man on a mission … tonight Heileman picked up 2 fouls in the first qtr but the Generals can bring in Adam Boyle at 6-5 who got plenty of PT when G Heileman was injured for 5 games in the regular season … the SHS bench Boyle/Malone/ Nate Johnson – makes them deeper than most teams … PG Costa Coconus doesn’t score much (tonight nothing on the board) but handles the ball well, gets the offense rolling … add to the mix Mr. Everything for SHS Ethan Heller – scores/handles the ball/ gets into the paint/ shoots the perimeter 3 ball … more importantly he IS the “go to ” guy … Sheridan jumped all over Steubenville in the 1st period with only 2 points from Heller … the 2nd quarter was Ethan Heller’s as the SHS dropped 21 points on the Big Red … Heller put up 10 on his ball alone … Landen Russell added 6 more points … off the bench Nate Johnson knocked down a triple and a deuce for 5 points … MORE defense, MORE Big Red turnovers – 8 more to be exact in the 2nd … 17 for the first 2 quarters … SVHS added 11 points in the 2nd while losing ground … the Big Red had 15 points total for the half … 17 turnovers … more turnovers than points ! the SVHS strength was said to be in the paint – FOR THE GAME the Sheridan inside D held Steubenville to only 11 fgs in the paint – 22 points while Sheridan OWNED the paint … scoring 52 points in the paint ! … inside presence at both ends for SHS … turned the Big Reds over 27 times resulting in 35 points off turnovers … total domination by the Sheridan Generals as they waltzed into the Regional Final Saturday … Sheridan 41 Steubenville 15 at intermission ….. Sheridan 69 Steubenville 43 a final …

… game balls to the Sheridan boys in the paint … Luken Hill + Grant Heileman + Landen Russell + Adam Boyle = 44 points vs the Big Red as a TEAM 43 points … couldn’t draw up a 1st quarter or 1st two quarters any better than what the Generals put together tonight – outstanding … 1 win away from going to the Show !!! … Best of Luck to the Generals vs New Philly Saturday at 7pm @ the Convo to wrap up The 3 Weeks of the Convo !!! … would love nothing more than to send a Southeast District team to the Show ! …