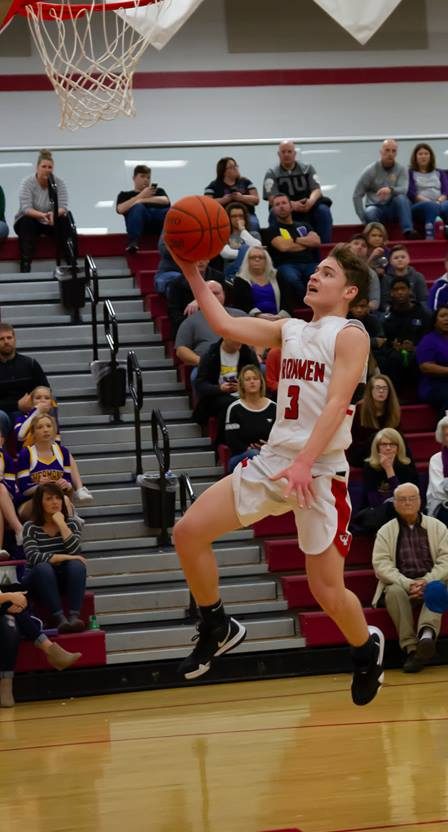 … entering the final game of district play at the Convo the Sheridan Generals , the #1 seed out of the Logan D2 Sectional, could only be viewed for what they are – one of the complete teams in the SE District : a floor general in Ethan Heller G/PG , PG Costa Coconus, size in the paint Luken Hill (6-5)/Grant Heileman (6-7) … a swing man in Landen Russell (6-1) who is strong in the paint, a solid defender on the perimeter/rebounder … off the bench MORE size in 6-5 Adam Boyle /6-3 Ethan Malone/6-2 Nate Johnson … not many teams in any of the division can match that mix on TEAM … ALL quality TEAMs that expect to go deep in the post season MUST have “THAT” player – their “go to” guy, a player who can “go get” points, who is calm under pressure/who answers the oppositions run with a big bucket on the perimeter, in the paint, at the FT line … yeah the Generals have one of those players – Ethan Heller …

… the Ironmen of Coach Morrow came to play ! opened the game going 5/5 from behind the arc vs the Sheridan 3/2 zone – Caleb Wallis with 1/ Nevan Yates 2/Cooper Donaldson 2 … while Sheridan went where we in the Cheap Seats figured they would go – to the bigs in the paint … in the 1st quarter it was 6-5 jr. F Luken Hill taking the ball to the rim for 7 points to keep the Generals above water with the JHS perimeter assault … Heller added 5 points on a trey and pair of FTs … Jackson 19 Sheridan 12 end of 1 … adjustments … basketball IS a game of adjustment – the JHS perimeter shooting took SHS out of their zone … the Generals went man to man in the 2nd … the Ironmen picked up an early transition bucket by Cooper Donaldson to put JSH up 21-12 … the Ironmen never scored again in the quarter … 0/5 from beyond the arc, didn’t get to the line … the Generals went on a 10-0 run to finish the 2nd … 5 more points for Heller (three ball #2) … Luken Hill/Branden Russell each picking up put back buckets in the paint … Sheridan 22 Jackson 21 at the half … 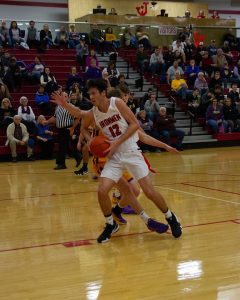 … no quit in the Ironmen … Caleb Wallis along with ALL of the Ironmen went full go for 32 minutes … size does matter – it showed …JHS had to expend so much energy to get a board … no real answer defensively for Luken Hill in the paint … only 14 points for JHS in the paint, the points needed to come from the perimeter – once Sheridan went man to man the open looks on the perimeter disappeared and the scoring in the paint was not how the Ironmen were going to be able to live in this one … great season, excellent game … on an ending note we got a glimpse of NEXT years Ironmen as freshman Evan Spires drained a 3 ball from the right wing to end the JHS scoring … Wallis/Donaldson, Drew Bragg/Evan Spires, Treylan Davis, Braxton Hammond – the Ironmen will be back in contention for Elite 8 status again next season …

… Ethan Heller (29 pts) shows again why he is one of the premier scorers of the ball in SE Ohio … can’t find many better than Mr. Heller … best of luck to Sheridan in regional action this week !…