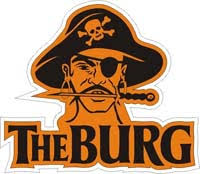 WHEELERSBURG —Carter McCorkle kept the Wheelersburg Pirates’ ship afloat on Friday night, before it was bombs away against the visiting Minford Falcons by almost everybody else. 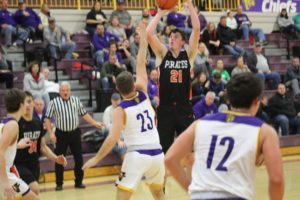 Spearheaded by the six-foot, four-inch junior McCorkle — who paced the Pirates and all players with 18 points, 13 rebounds and five blocked shots — undefeated Wheelersburg shot its way back from a seven-point first-half deficit, and pushed past the Falcons 59-50 in a Southern Ohio Conference Division II tilt at Wheelersburg High School.

With the victory, the Pirates remained perfect at 7-0 —and atop the division at 5-0.

In addition, Wheelersburg made Minford its 26th consecutive conference victim — as the defending champion Pirates last lost an SOC II affair in the 2017-18 campaign.

But, first things first for Wheelersburg coach Steven Ater, it was about being “1-0 tonight and winning this moment.” 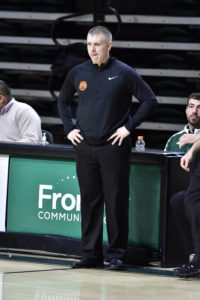 “Minford is about as good as anybody we’ve faced. They don’t have just one scoring threat. They have five guys who can shoot the three-pointer and everybody coming off the bench can as well. They put it on the floor and find each other well. They have good size and length too. But give our guys credit,” he said. “We got down seven, battled back to tie it up at halftime, and in the third and fourth quarter especially, they took a lot of contested shots. We started attacking offensively, and that got our confidence going.”

Minford, meanwhile, fell to 5-4 and 3-3 in the SOC II, but had the Pirates in peril for a four-minute and 24-second second-quarter stretch — in which the Falcons found themselves in front by seven points twice (27-20 and 30-23).

But as the Pirates started to shoot themselves out of the game against Minford’s zone defense, they flipped the switch and started to hit over an 11-minute and 20-second span of the middle two quarters —and thus turned the tide to lead 44-38 after three frames.

In the fourth quarter, Wheelersburg —by making 5-of-7 free throws and four field goals —opened up a lead as large as a dozen at 56-44, as the Falcons forged no closer than a 46-42 deficit on an Adam Crank old-fashioned three-point play just 45 seconds in.

Nathan McCormick collected a basket to make it 48-44 with six-and-a-half minutes remaining, but from there, McCormick canning a three-point goal with eight seconds remaining for the 59-50 final was the Falcons’ only other field goal.

They did convert 4-of-7 free throws in the final period, but J.J. Truitt’s old-fashioned three-point play for the Pirates to make it 51-44 with 6:19 remaining never allowed Minford to get any closer.

In Ater’s own words, McCorkle “carried us early when shots weren’t falling”.

He also blocked three of his five shots in the first 16 minutes.

“Carter McCorkle was just unbelievable. He changed shots when he wasn’t blocking them,” said Ater. “Offensively, early on, he carried us.”

Minford coach Josh Shoemaker concurred about McCorkle, and the Pirates’ defense, which forced them into 18-of-53 (34-percent) shooting with seven shots blocked.

The Falcons fired up 26 shots and made a dozen in the opening half, then couldn’t buy a bucket in the second 16 minutes —going 6-of-27.

“In the third quarter, we came out cold and that’s a credit to Wheelersburg’s defense. We had too many critical turnovers because we weren’t patient enough. A couple of times, we just missed wide open shots. Wheelersburg’s length also bothered us. They had a lot of blocked shots tonight, where we had a great fast-break layup and they weren’t fouls. They were good clean blocks. But that’s the difference winning and losing basketball games,” said Shoemaker. “If we get more shots to drop outside, it’s a different game. We’ve shot the ball well this year, but we didn’t shoot it well tonight and we came up on the short end.”

Actually, Minford made its shots, five three-pointers to be exact, through the opening 14 minutes. 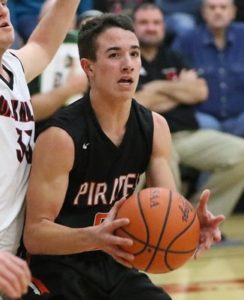 But after Eli Swords’ two trifectas for Wheelersburg in the opening period, the Pirates didn’t dial up another three-ball until the final 2:17 — when they made three threes thanks to one by Truitt to make it 27-23 and two by Matthew Miller in the final 38 seconds for the 30-30 halftime tie.

“At halftime, we talked about how we moved the basketball well. But we had two critical turnovers right there at the end of the second quarter. That left (Matthew) Miller open for two threes to tie it up,” said Shoemaker.

Miller then picked up in the third frame where he left off in the second, nailing another triple just 25 seconds in to make it 33-30 — and giving the Pirates the lead for good.

“We got into our rhythm, and sometimes it just takes one shot to go in for the dam to break. Matthew Miller made two right before the half and he comes out in the third quarter and bangs in another,” said Ater. “It was like confidence. The shots started to fall, we started doing some good things and working inside-out and passing the ball. I thought we were holding the ball too much against their zone. Trying to analyze and look for an opening instead of just moving the basketball and getting good crisp movement to find open shots. Once we started seeing the ball go through, we wanted more of those.”

“Our zone was so effective because we rebounded well out of it. In the second half, Wheelersburg came out confident, hit a couple of threes early in the third quarter and got the lead,’ said Shoemaker. “Then they are stronger inside than us driving the basketball, and that put them on the foul line and we fouled them.”

Both teams took 27 shots from inside the three-point arc and made 10, while both fired up at least 25 three-point attempts and notched eight.

A big difference: Minford was 6-of-10 at the free-throw line while Wheelersburg was 15-of-19.

“That’s as well as we have shot free throws all year,” said Ater. “But, we have spent a little time on them over the holiday break here. It’s good to see that pay off.”

Besides McCorkle’s 18, Miller managed 13 points, Swords scored 12 and Truitt tallied 11 —as Truitt (3-of-4) and Swords (2-of-3) combined for all of the Pirates’ fourth-quarter foul shots.

McCormick poured in 16 points to pace the Falcons on five field goals and 3-of-4 foul shots, as he and Zimmerman (nine points) drilled three three-pointers apiece.

Risner and Knore, with two deuces and one trey, each scored seven.

Elijah Vogelsong-Lewis led the Falcons in rebounds with nine, as Zimmerman pulled down seven boards.

Shoemaker said at some point, despite Minford playing hard and giving good effort, it needs to check off some win boxes.

“We’ve competed well and been in every game, but it’s time to start winning these bigger games. It would be nice to knock off one of these teams like Wheelersburg who is undefeated, Oak Hill who has one loss (to Wheelersburg) and Jackson who has two losses (to Wheelersburg and Chillicothe),” he said. “We’re right there, but you can only be there so many times without seeing some ‘Ws’. The kids are putting out the effort, but they needed to be rewarded for that with wins.”

The Falcons returned home, and returned to non-league action, by hosting Wellston on Saturday.