WHEELERSBURG —When Wheelersburg needed them the most on Tuesday night, Matthew Miller and Eli Swords sure made for a pretty good third-quarter tag team.

That’s because the junior Miller and sophomore Swords spearheaded the host Pirates’ pull-away from the Oak Hill Oaks in the third quarter, as the pair combined for all 16 of the Pirates’ points in the third period.

Then, in the fourth frame, it was junior J.J. Truitt’s turn to take a run at the Oaks, as he tallied 10 points in the stanza — and helped secure the Pirates’ important 56-49 Southern Ohio Conference Division II triumph.

It was one of Wheelersburg’s biggest victories of the year.

In addition to capturing their fifth consecutive win over Oak Hill and legendary head coach Norm Persin, the Pirates — the defending division champions — pushed the Oaks from atop the SOC II standings, as Wheelersburg and Waverly now share the league lead at 10-1.

Wheelersburg, which raised its record to 14-2, also completed the season sweep of now 15-3 Oak Hill —having won the first meeting between the two 50-47 at Oak Hill back on Dec. 17.

But while Tuesday’s triumph, in front of a boisterous crowd at Wheelersburg High School, was pivotal for the Pirates —head coach Steven Ater admitted that it’s only the latest step.

“This was a big game for us, not only for the league but also (Division III tournament) sectional seeding. Now we have two wins over them (Oaks), which I think is going to help separate some things. But, we have to make sure we don’t overlook anybody down the line, because every game is the most important game when you’re talking about trying to win a league title,” he said.

Indeed, there is a lot of basketball left to decide the SOC II championship —as the race, despite being the end of January —is still way too close to call.

Oak Hill hosts Waverly on Friday night, while Wheelersburg still must travel to Minford next Tuesday night and to Waverly next Friday night.

The Tigers, hosting Minford on Tuesday, avoided falling out of that first-place tie with Wheelersburg —as Waverly prevailed 68-63 in overtime.

For the Pirates, the second meeting with the Oaks was much different than the early Christmas miracle they pulled off in Oak Hill.

In that affair, Wheelersburg was reeling at the end of the third quarter — trailing by nine points prior to staging an epic comeback and escaping “The Nuthouse” with a massive victory.

In the third quarter on Tuesday, and after holding a 21-13 halftime advantage, the Pirates withstood nine unanswered Oaks’ points for Oak Hill’s only lead —by ending the final five minutes and 10 seconds on a 16-8 run, which included 10 unanswered points of their own for their largest advantage at 37-24.

The Oaks’ lead, in fact, lasted a mere 10 seconds.

The difference-making duo was Miller and Swords, who had combined in the first half for a mere Miller second-quarter field goal.

But the tandem tallied all 16 of the Pirates’ points in the third, as Miller made three baskets and 3-of-3 free throws — while Swords sank three field goals, including a three-pointer to make it 33-24.

Swords scored at the five-minute mark to give the hosts back the lead at 22-21, as Miller muscled seven straight points on two free throws — followed by a field goal and finally a three-point play to make it a six-point edge (30-24).

After Swords splashed his three-point goal, Miller and Swords scored another deuce apiece —for a 37-24 advantage at about the 1:10 point.

Each missed only a shot apiece in the quarter, as Miller attacked the rim —and the Oaks simply couldn’t and didn’t stop him.

Miller managed a dozen points on four field goals and 4-of-7 foul shots, while Swords scored 10 on two deuces and two treys.

“I thought Matthew Miller was really good as far as driving the basketball tonight. He got in straight lines, and went downhill. He did a great job either creating and finishing himself,” said Ater. “He got to the free-throw line a bunch too.”

Persin, whose Oaks teams are highly-regarded for being a lockdown defensive juggernaut, pinpointed the lack of stops against the Pirates’ dribble-drives.

In all three of Oak Hill’s losses, it has allowed at least 50 points —as Wooster Triway totaled 58 on the Oaks in their non-league game in Canton (Jan. 19).

The Oaks, which trailed anywhere from one to eight points throughout the entire first half while shooting just 5-of-18 with eight of their 12 turnovers, actually ended the tide-turning third only down seven (37-30) — thanks to three-pointers by Drew Hanning and Landon Hines in the final 35 seconds.

But Truitt took over in the fourth, scoring 10 points including eight on four made field goals —as the Pirates played with the lead and maintained it from six to 12 points, despite converting only 4-of-13 free throws in the frame.

Truitt paced the Pirates with 15 points, as his only other markers were a two and a three in the first quarter. 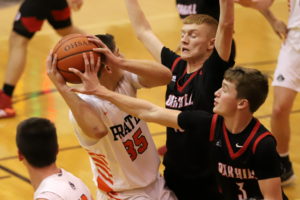 “We kept isolating J.J. and kept getting him the ball, and he finds Eli (Swords) in the corner for a three when they tried to double-team him or he drives and finds other guys and makes plays for other people. We put the ball in his hands and went through him, even though he may not be our primary scorer,” said the coach. “That’s the type of player he is. He sets up other guys. Then in the fourth quarter, we trusted him to make plays. He was driving and taking contact and just going all night long. He is bruised and scratched and beat up right now, but you could see it in his eyes that he wants to go make plays.”

McCorkle carried Wheelersburg offensively in the early stages of the first meeting, and scored nine first-half points on Tuesday night.

Like the initial matchup, McCorkle picked up a first-period personal foul —and so Ater opted to alter him defending Hammond in favor of Gage Adkins and Kenny Sanderlin. 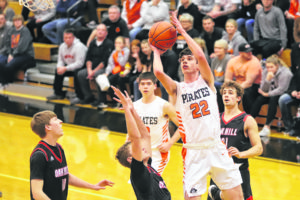 That allowed McCorkle to avoid further foul trouble, and able to guard Hammond harder for the second half.

Hammond —after pouring in 22 points in the first meeting but only scoring four in the final two quarters —had 11 points on 5-of-11 shooting on Tuesday, and also grabbed 11 rebounds.

“Hammond is the one everybody is going to gameplan for and try and take away, and we are no different,” said Ater. “Gage (Adkins) and Kenny (Sanderlin) really played some big minutes for us defensively and on the glass and giving us some points when we needed them. Those two guarded him (Hammond) for the rest of the half and did such a fantastic job of limiting his scoring, and that allows Carter to stay out of foul trouble and fresh for the second half.”

While the Pirates held Hammond down, Hanning went off for a game-high 26 — on nine field goals including four three-pointers.

Hanning had only four points at halftime, but erupted in the second 16 minutes for 22, including four twos and three threes.

But the Oaks got no closer, as Truitt and Miller split a pair of double-bonus free throws in the final 10 seconds.

The Oaks only shot 6-of-20 from three-point range, as Keaton Potter and Erik Kallner collected field goals for their only other points.

Trailing by as large as 13 late in the third, Oak Hill had just 13 shot attempts in the fourth — and committed its other four turnovers.

“We didn’t get enough help for Chase and Drew. The other kids had to step up and they didn’t,” said Persin. “We kept battling back and they were missing free throws, but we couldn’t get a bucket on the other end. It’s the way it is, and it’s just hard winning on the road, especially against when we’re playing a quality team.”

The Oaks, of course, aim to get right back in the SOC II championship chase —and can do so by defeating Waverly, which did they so on the road on Dec. 20.

“We have to take care of business at home and try to win on Friday and we’ll see what happens down the road,” said Persin. “There’s a lot of things that can happen, but we have to come back.”

The Pirates, meanwhile, move on to host Northwest on Friday night — before those critical road shows next week.

However, they had to have the sweep against the Oaks —and Ater praised them for “playing well and together”.

“Really proud of these guys and the way they played tonight,” he said. “This was the big game in front of us, and I thought we were locked in and focused.”