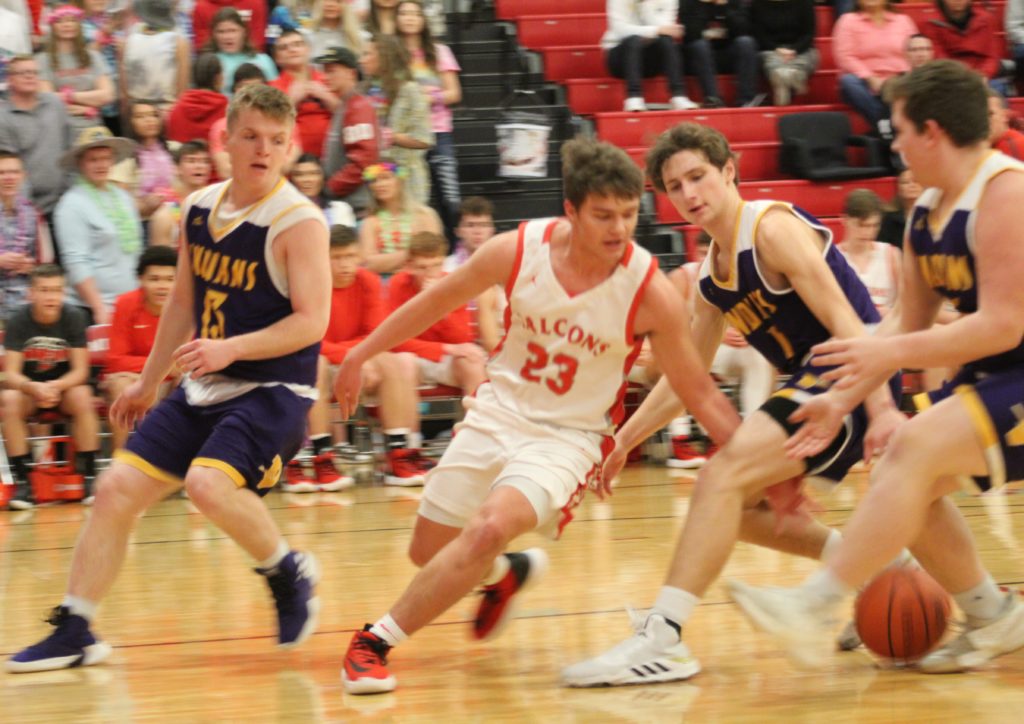 Against visiting Valley on Tuesday night, the Falcons both shot the ball well — and perhaps defended even better — as host Minford mustered an impressive, and important, 56-30 Southern Ohio Conference Division II triumph.

While the Indians are one of the Falcons’ chief rivals, Minford started fast for both halves —scoring the opening eight points in the first quarter, followed by scoring seven straight to tip off the third frame.

The Falcons only allowed the Indians 30 points and never trailed —as that 30th point came at the buzzer on a jump shot by George Arnett.

Otherwise, Valley only trailed by five points twice — at 8-3 after Dylan Ellis made the Indians’ only three-point goal at the four-minute mark of the opening quarter and at 10-5 on one of four field goals by Kayden Mollette.

Over the final three periods, the Falcons led by at least six points, as the lead soon swelled to 11 points twice (20-9 and 20-11) in the second stanza —and to as large as 15 points four times in the third.

Finally, after extending the lead to 42-24 with Elijah Vogelsong-Lewis’ three-ball to beat the third-quarter buzzer, the Falcons forged on by outscoring the Indians 14-6 in the fourth quarter —and doubling their advantage to 56-28 with 16 seconds remaining.

Minford doubled up the Indians 20-10 in the third, part of a 34-16 winning of the entire second half.

Valley’s only fourth-period points were a pair of Bryce Stuart free throws at the six-and-a-half minute mark, followed by a rebound putback by Ty Perkins and Arnett’s buzzer-beater to hit 30.

Minford coach Josh Shoemaker was asked if Tuesday’s tilt was the best performance by his Falcons all season.

Aside from the 9-9 tie in the second canto, and only scoring 14 for the final 13 minutes and 15 seconds of the half, you could make the argument it was.

“Each quarter, we were consistent. We had seven threes tonight, and I thought we shot the ball well, but it all started on the defensive end. To hold a team to 30 points in a varsity boys basketball game is a good accomplishment,” said Shoemaker. “We guarded really well, they only had 10 points once in a quarter and we scored double digits in three quarters. In the first half, we got a little complacent after getting up 8-0, struggled to score the rest of the half. In the second half, we really put together a complete game on both ends and played good, consistent basketball. Valley is a local rival with identical records (6-4) coming in. For us to come out with a 56-30 win, hats off to our kids for playing extremely well tonight.”

Shoemaker said he believed his squad was “quicker, faster at all five spots” — and wanted to play an up-tempo pace.

“We tried to play fast tonight. We felt we were quicker and faster, so we really wanted to push out and have as many possessions as possible. I was happy with the way everybody guarded and rebounded the basketball and pushed in transition,” he said. “Just a total team win, and we got a lot of guys in the scoring column.”

Of the Falcons which played, precisely a dozen scored at least one field goal.

Indeed, Minford played well — as Valley coach Eric Horton had nothing but credit for the Falcons.

“Minford is a good shooting team and they made their shots right off the bat tonight. At any point in time you are playing them, they can score 10 points really fast. Unfortunately, they did that tonight to us right out of the gate and then again right at the beginning of the second half. Once we settled back into it both halves, I thought we guarded them pretty well,” he said. “But they are a good shooting team and once they get a couple of guys shooting that well, they can make a quick run. That’s what happened to us.” 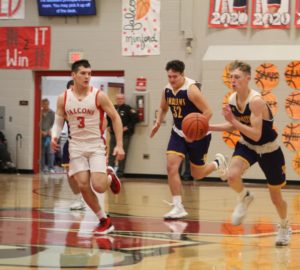 The main Minford man on Tuesday was Vogelsong-Lewis, who accounted for four deuces and three treys towards his game-high 17 points.

In fact, Vogelsong-Lewis landed nothing but net on all seven of his shot attempts.

“He didn’t take a bad shot in those seven shots either. He let the game come to him, got everybody involved, and had big threes at the end of two quarters,” said Shoemaker.

His biggest basket beat the first-quarter buzzer, as he caught a cross-court zone pass and knocked it down from the wing, as he was actually knocked to the floor in the process.

“Vogelsong-Lewis hit three threes tonight, but I thought our defense was about as good as we could have it. Credit to him for making the shots,” said Horton. “When you play good defense and he still makes the basket, it’s deflating. I thought they did that to us too many times, and it’s hard to recover from.”

He actually opened the game with a triple just 30 seconds in, as Trenton Zimmerman — who added eight points — made one for a 6-0 advantage.

Skylar Knore netted the Falcons’ other two threes —the first of which was with four-and-a-half minutes left in the second quarter to make it 18-9, as the Indians never got closer the rest of the way.

“We had opportunities to score, but we just didn’t finish possessions off tonight with a basket. I thought they were in the same spots we were, and they scored and we didn’t. That’s the difference in the game. Credit to Minford for making those shots,” said Horton.

The outcome certainly impacted the SOC II standings —especially since just a few miles to the south another crucial development was occurring in Wheelersburg.

Both Valley and Minford entered at 6-4, but the Indians are now 4-2 in the division, followed by the Falcons moving to 4-3.

Meanwhile, Waverly won at Wheelersburg 67-58 (see related story), as the Pirates are no longer undefeated —and both of those teams, along with Oak Hill, are now tied atop the league at 5-1.

While Minford is off for a week until it hosts winless Northwest next Tuesday, the Indians entertain both Oak Hill (on Friday night) and Waverly (on Tuesday, Jan. 14) for their next two affairs.

A Valley victory, or two, will cause some surefire SOC II shakeup, but maybe Minford —thanks to Tuesday night’s triumph — can get back in this championship chase as well.

The seven wins by the Falcons matches their entire total from a season ago.

“This was just a great team win for us. We’re at the halfway point, and I’m proud of where our kids are at at this point in the season,” said Shoemaker.