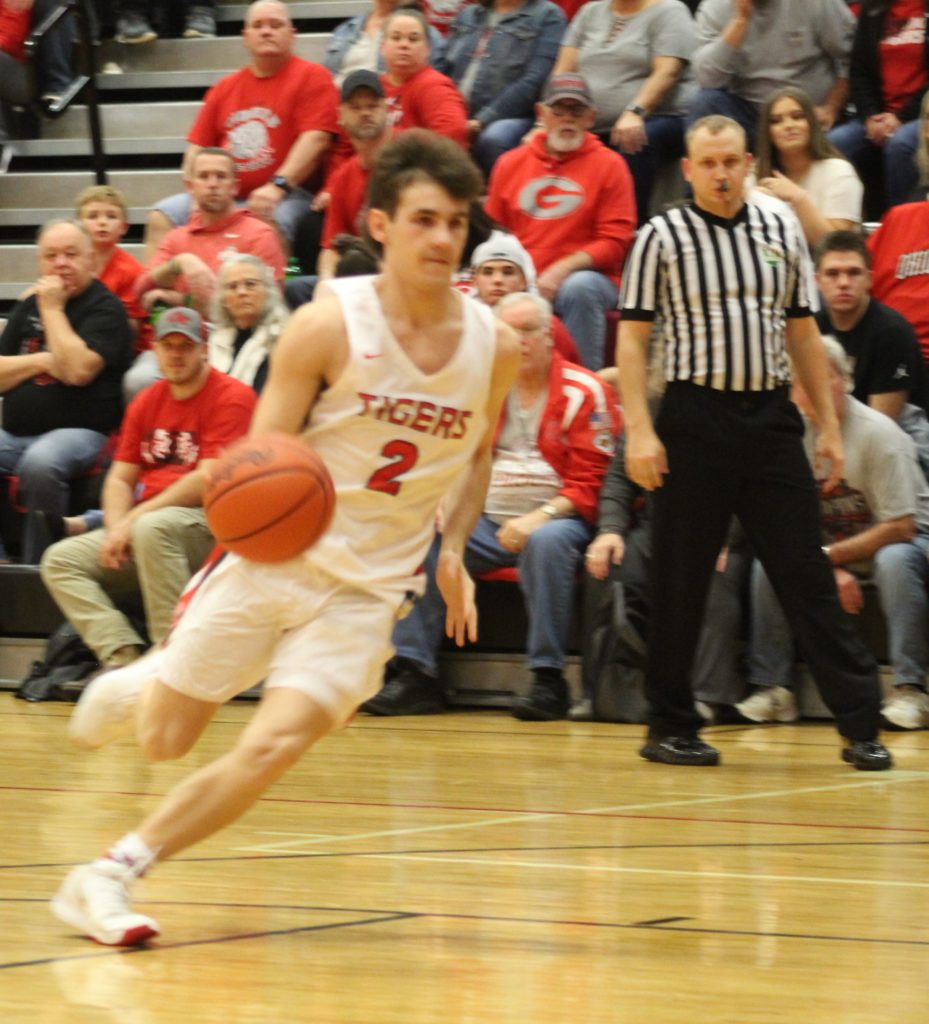 No doubt, at the very least, it had to impress members of the 1960 squad which were in attendance —and honored —on Saturday night.

The host Tigers led wire-to-wire, and executed their gameplan to near perfection, in capturing a key 68-63 non-league victory over the South Point Pointers inside an amped-up Homer Pellegrinon Memorial Gymnasium in New Boston.

With the victory, the Tigers —the third-ranked team in the Associated Press Ohio High School Boys Basketball Division IV poll —raised their stellar record to 11-1, while South Point of Division III fell to an even 5-5.

The Tigers, in front of the famed 1960 team which was honored on Saturday night for winning the regional championship 60 years ago, took pages out of an old-school playbook against the Pointers.

That gameplan indeed worked, as the Tigers —having never trailed and only taking 10 total three-point attempts — tallied 27 field goals from inside the arc on an array of elbow jump shots, high-post to low-post passes, and the classic beat ‘em backdoor Princeton-style cuts.

It all started with — and centered around — six-foot five-inch Kyle Sexton scoring seven first-half field goals, and ended with Tanner Voiers and others attacking the basket in the second half.

It appeared to be throw-back basketball, with excellent ball movement and more importantly ball-sharing, but Cox claimed it was the “best-followed gameplan of the season”. 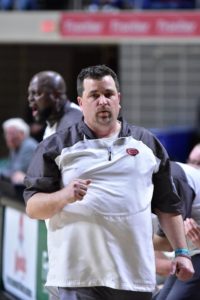 “That was our gameplan. That’s the best our kids have followed a gameplan all year. We have detailed reports on everybody we play. But tonight was the first time I thought they (Tigers) trusted the gameplan 100-percent. And we went eight deep, and you didn’t see us drop off when anybody came in the game. Even in timeouts, they responded and got the ball where we wanted to. We came in and practiced hard this week of playing against a zone. They (Pointers) zoned us last year, and we really didn’t have a good offense for that. I thought that tonight we were able to establish a presence on knowing we were going to go to the post, no matter whether they zoned us or not,” said the coach. “We didn’t think they would have an answer for Kyle, but not a lot of teams do have an answer for Kyle.” 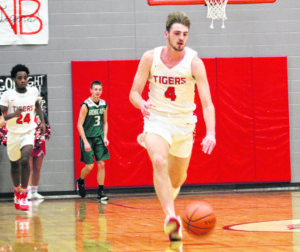 Sexton scored 16 points on seven first-half field goals and 2-of-3 fourth-quarter free throws, as he also grabbed 14 rebounds and dished out six assists.

Sexton drew double and triple-teams, which freed up the likes of Tanner Voiers, Marcus Saunders and Jerome McKinley — as Voiers went off for a team-high 18 points on seven field goals and 3-of-4 free throws. 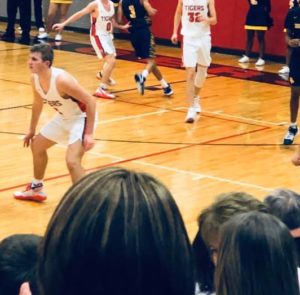 Voiers scored 16 in the second half, as Saunders and McKinley mustered seven points apiece on three second-half field goals.

Malachi Potts and Devon Jones scored a basket apiece, as the entire offense was predicated off of Sexton’s passing.

“We executed really well on trying to make sure we went inside then out. Instead of relying on the outside shot. We really developed that in the second half at Peebles (52-46 loss on Jan. 4) and realized how undeniable we were once we established a post game. We did a great job of establishing Kyle (Sexton) inside early, and that makes people around Kyle a lot better, as long as they don’t stand,” said Cox. “I thought we did a good job of moving off of Kyle’s passes in the post. He had 14 in the first half, and only scored two points in the second half, but he drew two or three defenders the rest of the way out. We then tried to establish Tanner (Voiers) more in the post with a mismatch on him. Just to give it a different look and to get Tanner’s confidence going.”

But, even the best gameplans can go off script —and some even work out when they had no business to begin with.

The Tigers maintained anywhere from a two-to-eight point advantage in the opening 18 minutes and 45 seconds, before finally leading 43-32 with 3:08 to play in the third quarter.

However, the Pointers sliced the deficit to 43-41 with nine unanswered, including back-to-back steals and layups by Chance Gunther and Nakyan Turner —and a three-point bomb by Gunther with a minute and 27 seconds to go.

A Clark basket snapped a two-minute scoring drought, but Voiers’ three-point basket to beat the quarter-buzzer was indeed the sight to behold.

With time winding down, Sexton and a South Point player scrambled for a loose ball near the elbow —with Sexton, on his backside, basically back-tapping somehow the ball back to Voiers on the wing.

Voiers caught the pass, and off-balance bagged a dagger of a three-pointer to make it 48-41.

The play happened directly in front of the Tigers’ bench, as they roared in celebration —and Cox was the first to high-five Voiers.

“Just how we drew it up,” joked Cox. “Let’s knock the ball around about three times, travel and get away with it, have Kyle tip it off the floor, which was a very heads-up and great hustle play by Kyle, and Tanner hit that off-balance three on one foot. Tanner had been in a shooting slump and scoring slump lately, but tonight was a really good breakout game for him.”

But South Point never went away.

At exactly the three-minute mark, he splashed a corner-pocket three for a 59-49 Tiger advantage, as South Point never got the deficit under eight after that.

The Tigers sank 5-of-7 free throws in the final 6:25, while the Pointers —which were in the bonus situation for the final four minutes including the double bonus for the final two —could only make four of 10 attempts at the line in the last quarter. 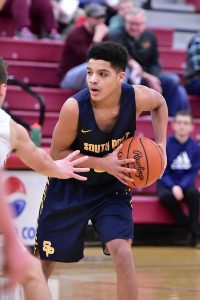 Gunther, who poured in a game-high 25 points including all three of the Pointers’ treys, canned a pair in the final 1:37 —including swishing one at the buzzer for the 68-63 final. 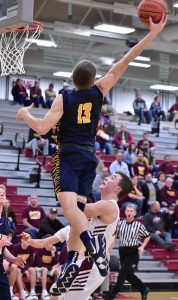 Austin Webb chipped in 13 points on five field goals and three made free throws, but Cox said his Tigers — especially Sexton — stymied him to almost half his scoring average.

“The Webb kid is averaging 25 points per game. I thought Kyle clamped him down all game long,” he said.

Indeed, defensively AND offensively, Cox said his team “needed that” — as in arguably its best performance of the year.

“That’s our biggest win of the season so far, in my opinion,” he said. “I felt like we needed that. That’s a good Division III team that we beat. We’re 11-1 right now and we work our tails off.”

And, it had to impress the 1960 regional champions — which went 24-1 (90-5 in four years) and is the only New Boston boys basketball team to ever reach the state tournament.

The Tigers of 60 years ago sat right behind the current Tigers’ bench to witness the win firsthand.

“These guys wanted to show those guys what they want to carry on. They feel like they are the best team since that 1960 team,” said Cox. “They (2020 Tigers) wanted to show that they are proud to be mentioned in the same sentence as them. We respect our alumni here at New Boston and it’s something special.”