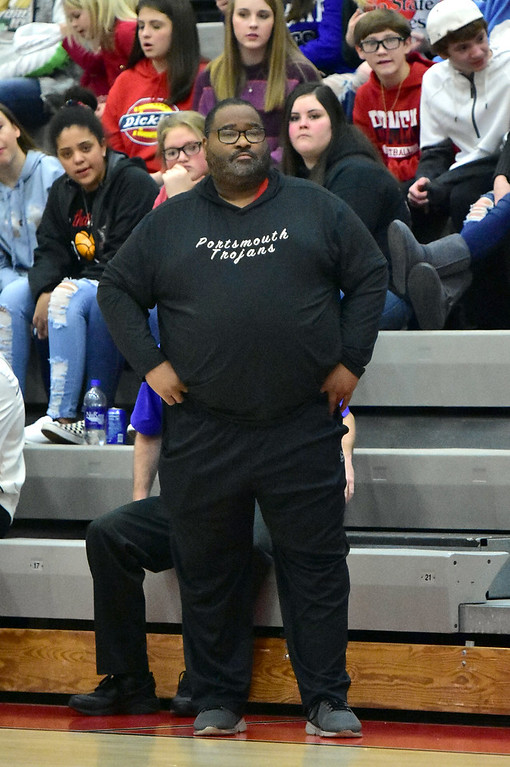 PORTSMOUTH — Eugene Collins doesn’t seem to get too high or too low during basketball games, and definitely shouts and screams even less.

Instead, what Collins does do besides calms the proverbial waters is win at the same time.

And, at his alma mater of Portsmouth High School on Tuesday night — inside PHS’ Trojan Arena —Collins captured his 169th career coaching victory, making him the second winningest coach in the decorated and proud history of tradition-rich Trojan boys basketball.

His Trojans, trailing for just two minutes in the second quarter and shooting a sizzling 56-percent for the entire game with 10 made three-pointers, triumphed 72-61 over the visiting Coal Grove Hornets in an Ohio Valley Conference contest.

With the victory, the Trojans bounced back nicely from a heartbreaking 62-61 OVC loss at Ironton on Friday night — and improved to 6-7 and 3-4 in the league.

But Tuesday’s tilt was all about the 11-year head coach Collins, who entered against the Hornets tied with Richard “Red” Hopkins with 168 career wins —tied for the second-most all-time on the career coaching wins list at Portsmouth.

Collins — widely respected amongst coaching peers, players and fans alike — especially those in Southeastern Ohio, commented on his Trojan tenure and what the honor means. 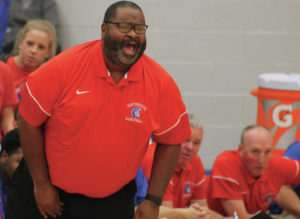 “This is special. To not only play here, but then become the head coach here. We’re in the top-10 in all-time wins in the state. I have to give a ton of credit to all my players, former staff, current coaches, the administration…everybody has been really good to me. I’ve just been blessed and fortunate to ride this wave,” he said. “It hasn’t felt like 11 years, but time has been flying by.”

Indeed, it doesn’t feel like a second decade of coaching has started for Collins, but the resume from his first 10 years is quite impressive.

His Trojans have appeared in three regional championship games, which include back-to-back Division III state tournament berths in 2011 and 2012.

At the league level, Portsmouth won two Southeastern Ohio Athletic League titles in 2012 and 2014, followed by an OVC championship in 2015.

Speaking of 2012, he is the last Southeast District boys coach to have won a state semifinal, as his Trojans topped Ottawa-Glandorf 74-66.

If Collins coaches long enough, and if the Trojans win of course, it is likely he will pass Heller —as only 55 victories separate the two as of this morning.

But Collins’ chief concern on Tuesday night was getting his 2020 Trojans back on the winning track, as Portsmouth pushed out to a 16-8 early advantage —before the Hornets hit back behind Evan Gannon’s three first-half three-pointers and went on a 15-3 run over a span of six minutes.

Coal Grove claimed its lead at 20-19 on a Peyton Smith drive at the 4:45 mark of the second quarter, as Gannon garnered his final trifecta for a four-point bulge (23-19) just 25 seconds later.

But the Trojans’ Amare Johnson drained two treys just 45 seconds apart for the 25-25 tie, sandwiched around Smith scoring on a rebound putback.

That’s when Matthew Fraulini caught fire for Portsmouth, as his second-stanza three-ball boosted the Trojans back in front for good at 28-25.

After two first-quarter deuces, he dropped in another in the second to make it a five-point (30-25) lead, as Drew Roe then scored with 90 seconds left in the period for another advantage (32-25) of at least six.

Did they ever — especially in the second half after those three makes on a dozen attempts in the first.

Three Hornet hoops got the guests to within 34-33, but the Trojans —with three threes by Fraulini and one from Roe —doubled up the Hornets 20-10 over the final 5:13 of the third quarter.

In the fourth frame, Carr dialed in twice from long distance, as Johnson —with Portsmouth leading 60-51 and with 4:15 remaining —drilled his third three to make it a double-digit lead the rest of the way.

The Trojans then finished off Coal Grove with 4-of-6 free throws in the final 1:23, as Johnson split a pair for his 14th and final point —while Fraulini went 3-of-4 to cap his team-high pouring in of 23.

The Trojans, aside from the five twos and five threes from Gannon towards a game-high 25 points, defended well on the perimeter —as Coal Grove shot just 5-of-22 from three-point range.

“Our gameplan was to make sure we didn’t give their shooters good looks,” said Collins. “For the most part, we did pretty good except for Gannon.”

The Hornets, which had won five consecutive over the Trojans, fell to 3-9 —and to 2-5 in the OVC.

The triumph by the Trojans was important for the young club’s confidence, and to inch closer to the .500 mark while climbing the ladder of the OVC standings.

It’s a two-horse race right now with league-leader Fairland and second-place Chesapeake, but Portsmouth desires to make it a three-way or even four-way dance, as South Point and Ironton are in the middle mix as well.

“It’s a great win for our kids. I am so proud of them,” said Collins. “To get a win and get to 3-4 in the league, we kind of went from the bottom of the league to the middle of the league. It was a great opportunity for us. I think tonight we finished the game, whereas at Ironton we just didn’t close it out. We took strides tonight at getting better at finishing.”

And, Collins took a personal stride into Portsmouth boys basketball history, although his focus following Tuesday night’s win was indeed on the here and now.

“We’re having fun and we’re getting better every game. We’re looking to be humming on all cylinders come February,” he said.

Information from www.PortsmouthBasketball.net was used in this report.