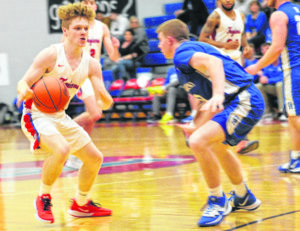 PORTSMOUTH — Indeed, it appears as if a couple extra days off didn’t do any harm to the Portsmouth Trojans’ legs.

That’s because the host Trojans, in an Ohio Valley Conference makeup matchup on Monday night, torched the nets from three-point land against the Gallia Academy Blue Devils — tossing in 12 treys en route to defeating Gallia Academy 70-55 inside PHS’ Trojan Arena and completing the season sweep.

That’s correct: triples better by the dozen —and accounting for half (36) of the Trojans’ tally.

The Trojans raised their OVC record to 5-7, while the Blue Devils — after simply shocking league-leader Fairland 55-47 last Tuesday night — are now 4-8 in the league.

Both clubs are now 8-11, as —speaking of last Tuesday night — that was when the Trojans last played prior to Monday, as they rolled Rock Hill while senior standout Matthew Fraulini became the ninth Trojan in school history to eclipse the 1,000-point plateau.

The game against Gallia Academy was originally scheduled for Friday night, but because of the flu bug biting the Gallipolis City School District, it was postponed until Monday.

All indications are that the Trojans took advantage of the weekend off, because they looked fresher — and faster — against Gallia Academy, who was without starters Reece Thomas and Cooper Davis due to illness.

Offensively, they made multiple layups off steals —and dialed up those dozen three-pointers, including six from Fraulini, who poured in a game-high 27 points on 10 total field goals.

They also won several loose balls, making those hustle plays that don’t show up on the stats sheet.

Portsmouth coach Eugene Collins said it was a solid performance from his Trojans —aside from being doubled up 20-10 in the second stanza — from opening tip to final buzzer.

It could have easily been the Trojans’ third win in a row, which lost a late lead at Fairland —and fell 75-73 in overtime on Jan. 24.

“Our guys were ready to go and I think we’re feeling pretty good right now. We thought we had Fairland, but we were able to come home and get a good win against Rock Hill and then follow it up with this win tonight. I think guys are feeling confident that we have things going in the right direction,” said Collins. “We’re getting better in a lot of areas, from free-throw shooting and our rebounding tonight which was big. We’re trying to work on things, and no better way than to work on them than getting a win.”

What was most important on Monday was Portsmouth playing at a preferred fast pace, getting the basketball up and down the floor while the Blue Devils —with freshman center Isaac Clary —wanting to slow things down and operate in a half-court set.

The Trojans turned the Blue Devils over early and often, scoring the final 14 points over the final three minutes and 42 seconds of the opening quarter — and leading 22-5 at the first stop.

Gallia Academy led 2-0 and 4-3, but the Trojans got threes from Fraulini and Jesse Dixon to go ahead 6-4 just a minute and 50 seconds in — and never trailed again.

Miles Shipp scored on a fast break to make it 8-4, then Clary converted one of two free throws at the 3:57 mark for the Blue Devils’ final point of the period.

As part of the Trojan onslaught over those final four minutes, Chris Duff drilled a pair of threes —one from the corner and one off the wing —while his top-of-the-key trifecta made it 27-12 with 4:40 remaining in the second stanza.

The 22-5 advantage, and Shipp’s shot from the top to make it 24-7, were Portsmouth’s largest leads.

Truth be told, the Trojans just looked quicker and crisper.

“It was critical that we got off to a good start tonight,” said Collins. “When we make shots, we can get in our press and our pressure bothered them. I knew it was going to be a game of us wanting to get up and down and them wanting to play in the half-court and throw it inside to their post guys.”

But the Blue Devils’ furious rally was thanks to Portsmouth playing suddenly sloppy, and the guests getting three-pointers to fall from Logan Blouir and Devin Lee once — and Carson Call back-to-back.

“We were helping down on their post guys and we were leaving a few guys open. They adjusted and put some guys in who made some shots, but I was willing to give up some perimeter shots versus them just throwing it down in the post every time and getting us in foul trouble,” said Collins.

The Blue Devils’ deficit went from 15 (27-12) to four (29-25) over a span of three minutes and 52 seconds, but then Fraulini found the range from deep off the wing to beat the first-half horn.

Collins said the set play for Fraulini, the biggest shot of the game, turned the momentum back in the Trojans’ favor — and stopped the proverbial bleeding.

The Trojans then scored the opening eight points of the third frame —on back-to-back threes by Dixon and Fraulini followed by a transition bucket by Donovan Carr.

“That was a big swing,” explained Collins. “They had momentum, but we called a set play there to end the half. We ran it to perfection with Matt (Fraulini) knocking that three down. Then we came right back out to start the second half and scored the first eight points with two more threes to start. That was 11 straight points, so that was a big big thing for us to keep the game going the way we wanted it to go.”

That made it 40-25 only a minute and 50 seconds into the second half, as Gallia Academy didn’t score until the 5:42 mark when Clary converted an old-fashioned three-point play.

Furthermore, Fraulini was just warming up, as he halted a five-point personal run by Clary with another three-ball from the corner to make it 46-34 —and threw down a slam dunk at the 1:23 mark for a 48-36 advantage.

“Hats off to Matt Fraulini. He was big with 21 points in the second half. He made some big three-pointers when they were trying to pressure us,” said Collins.

The Trojans, without the Blue Devils fouling, then ran out the final minute-and-a-half of the clock — although Drew Roe found Fraulini wide open underneath the basket with 25 seconds remaining.

That final Fraulini field goal made it 14 twos and 12 threes for Portsmouth, as Dixon (11 points) and Duff (nine points) had three threes apiece —with Shipp scoring five twos for 10 points, including six points in the first quarter.

Call connected for a dozen on his four treys, as Damon Cremeens (two field goals) and Ben Cox (one field goal and 2-of-2 free throws) contributed four points apiece.

Portsmouth returns home, and returns to OVC action on Friday night, against Ironton for its Senior Night tilt.

Only Fraulini and Jack Workman are Trojan seniors, as they seek to avenge a 62-61 setback at Ironton on Jan. 10.

This time, the Trojans will need that couple of days off to rest their legs — as they aim to come out firing again against the Fighting Tigers.

“We’ve been making 10, 11, 12 threes every night. That’s been our trend,” said Collins. “Our goal is to win these last five games, and we’re playing well right now. It was a huge win for us tonight.”