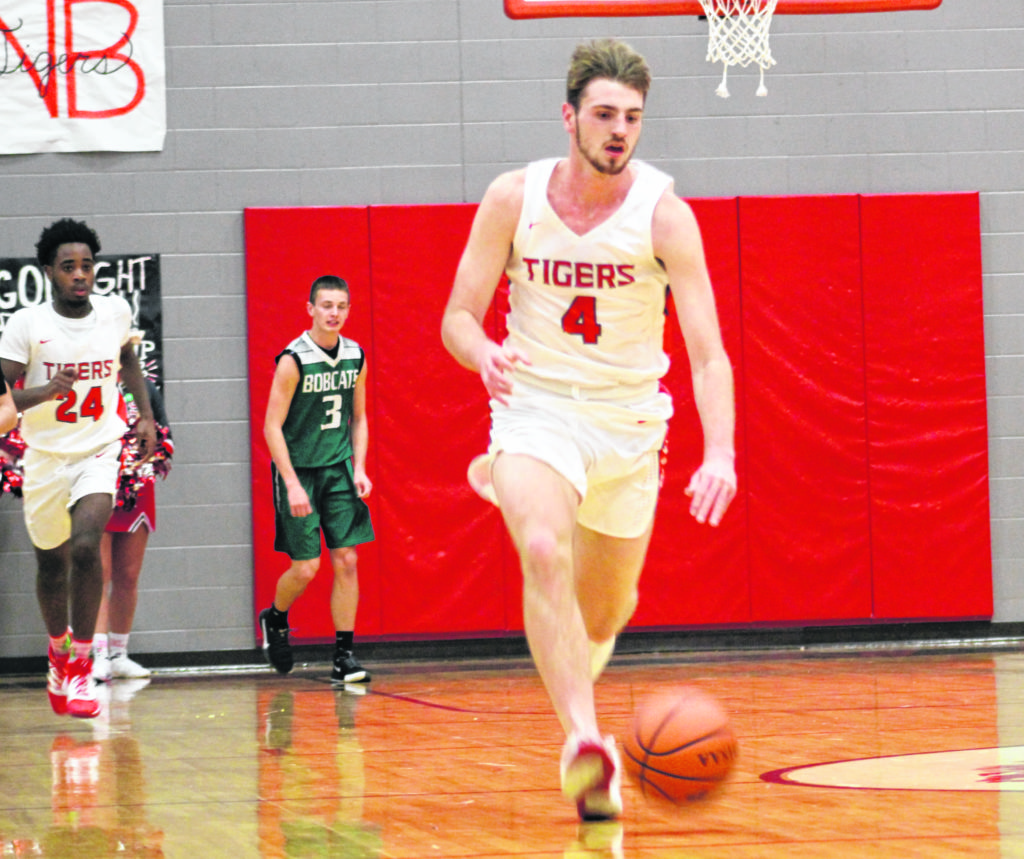 NEW BOSTON — Adam Cox admitted he found himself sweating this one out.

“I haven’t sweated all year, and I sweated all night tonight,” said Cox, the Tigers’ third-year head coach. “It just was a hard-fought game. They battled every quarter.”

That’s because the visiting Green Bobcats had the Tigers seeing proverbial red, or even white on Friday night, and were within an eyelash of perhaps stealing their undefeated Christmas.

But not so fast friends and countrymen — the sky is not falling, rumors of the Tigers’ demise are greatly exaggerated, and New Boston’s happy holiday is indeed saved.

The Tigers — having to navigate a minefield full of foul calls, foul shots and many missed shots — tallied the final 11 points over the game’s final three minutes and 56 seconds, and carved out from the free-throw fest a 56-43 Southern Ohio Conference Division I boys basketball victory inside Homer Pellegrinon Memorial Gymnasium in New Boston.

With the win, the talented and highly-touted Tigers are now a perfect 7-0 — and 4-0 and tied atop the SOC I with newcomer Ironton St. Joseph.

While Whiteoak — in a non-league encounter a week ago — only lost to the Tigers by eight points (58-50), Cox commented that the Bobcats brought a much greater and intense physical challenge.

There were 54 combined free throws — on 48 total fouls called.

“I’m just proud of our guys to weather through the storm of what was definitely the most physical ballgame we’ve played all year. The physicality was…with all the free throws, it was hard for us to get into a rhythm. And I’m not so sure that wasn’t the most fouls I’ve ever been a part of in a high school game in my life,” said Cox. “There were a lot. We shot 33 free throws and they shot 21. There were a lot of quick whistles, and both Green and us had to adjust to the style of play that they were calling. We battled through it, we showed some resilience.”

So too did the Bobcats, but Green head coach Dirk Hollar was clearly frustrated with all the whistles — and elimination of the game’s flow.

In the first half, the Tigers were in the one-and-one bonus situation with 6:17 remaining — and in the double bonus by the 4:24 mark.

“It’s very frustrating, because I feel like we got nothing,” said Hollar. “It’s really sad for the kids because that was a great ballgame, and I’m not saying that it would have made a difference in the outcome, but we felt the kids on both sides were taken out of the game tonight.”

The Bobcats — now an even 4-4 but 1-3 in the SOC I — also battled back from a 22-7 deficit with five minutes and 27 seconds remaining in the second quarter.

Green’s lone lead was at 3-2 on a Smith three-pointer, as the Tigers turned up the pressure and began to pull away before Smith started the Bobcats’ comeback bid with his other three-pointer — at the 5:17 mark of the second to get Green within a dozen (22-10).

However, the Bobcats never got within one, tied or took the lead again — and actually failed to score again after Huffman hit 2-of-3 free throws over a 26-second span midway through the final period.

Huffman hit a foul shot with 3:56 remaining, but the Tigers scored the final 11 over the final two-and-a-half minutes.

As the Bobcats misfired from the field, including a Huffman three-pointer from the wing which would have given Green a 46-45 lead, the Tigers took advantage — as Grady Jackson grabbed the rebound and drove coast-to-coast for the layup and a four-point (47-43) bulge.

New Boston standout Kyle Sexton scored inside at the minute-and-a-half mark, and the Tigers — despite shooting a whopping 33 free throws and only making 18 of them — converted seven of their final 10 over the final minute and 13 seconds.

The Tigers netted 9-of-17 freebies in the second half, as all 10 of Sexton’s attempts with five makes were over the final 16 minutes.

Sexton — despite sitting most of the second quarter with two personal fouls — poured in a game-high 17 points, as he also made six field goals.

He ripped down 20 rebounds as well, and amassed five assists and five steals.

“We called a couple of sets to get Kyle some looks and we were able to hit some free throws down the stretch. We started to run our sets with more patience,” said Cox. “We were able to spread them out to the point where they had to come out and guard us.”

But the final four minutes of shutout basketball was more of a credit to the Tigers’ defense.

Trailing 49-43 and only 90 seconds still to play, Green was forced to foul — so its personals number inflated to 28 along with New Boston’s free-throw attempts to 33.

Hollar said his charges didn’t protect the basketball in the final few minutes, much they like did in falling behind 22-7.

“We turned the ball over too much tonight. We panicked and we rushed and tried to get shots, but in doing so, we just didn’t take care of the ball. Plain and simple,” said the coach. “We went over and over and over that you can’t dribble the ball against this team. New Boston did a great job defensively, but we can’t dribble against a 2-2-1, and we continued to try it tonight.”

The Bobcats started slow again, scoring just the seven points prior to the 5:27 point of the second quarter — on Smith’s three and a basket and 2-of-4 free throws by Sampson.

“Ever since the South Webster game, which was the second game of the year, it’s like we have no sense of urgency to jump out on a team and get that swag before they get it,” said Hollar. “We can’t start every game down five, 10, 15 points. We scored seven points tonight in a quarter-and-a-half.”

Sampson finished with five field and 4-of-6 free throws, while Smith sank four field goals and a foul shot.

Huffman had eight on three deuces and 2-of-3 fourth-quarter free throws, while four other Bobcats combined for two field goals and 6-of-8 at the line.

Jackson scored eight off the bench on four buckets, as four other Tigers tallied at least one point apiece.

The Tigers, despite not canning a single three-point goal and missing several short-range in-close opportunities, totaled a 19-14 advantage in total field goals.

Cox said a key was his club keeping steady the ship when Sexton was on the bench in first-half foul trouble.

“I made a decision, given the amount of fouls being called, to sit Sexton second quarter. I wanted to show our depth and our bench that I believed in them, even if our captain and our leader was on the bench with fouls. I wanted to see what they could do to handle it,” he said. “What was crazy was that we just practiced on Wednesday without Sexton. He was icing and rehabbing his knee which he hurt against Clay. I thought we looked good that practice, and I thought that really helped us tonight to get through that and maintain the lead.”

Hollar believes had his Bobcats either tied or taken the lead late, they would have captured the victory.

“We couldn’t get over that hump. But when you miss a lot of easy layups and jumpers, you don’t get over that hump. I thought if we got over the hump, we would have a chance to win. I’m very proud of how my kids played and fought. New Boston is one of the best teams in Southern Ohio. It was a one or two-possession game for the final two-and-a-half quarters.”

The Bobcats returned home, and returned to non-league action, on Saturday night in a makeup matchup against Fairview (Ky.).

Meanwhile, New Boston is off until Friday night — when it travels to Meigs County and sees a solid Southern squad.

“My first two years, we didn’t win the game right before Christmas. I’ve lost every Christmas break game and I’ve struggled through Christmas. So it’s an early Christmas gift,” he said. “We’re undefeated in the league and we’ll have some time to get some work in. Give Green all the credit in the world and they weren’t backing down from us. For us winning a game like this, where we have a lot to improve on, it builds character. I was glad we were able to persevere and hold the ball and seal it with some made free throws.”