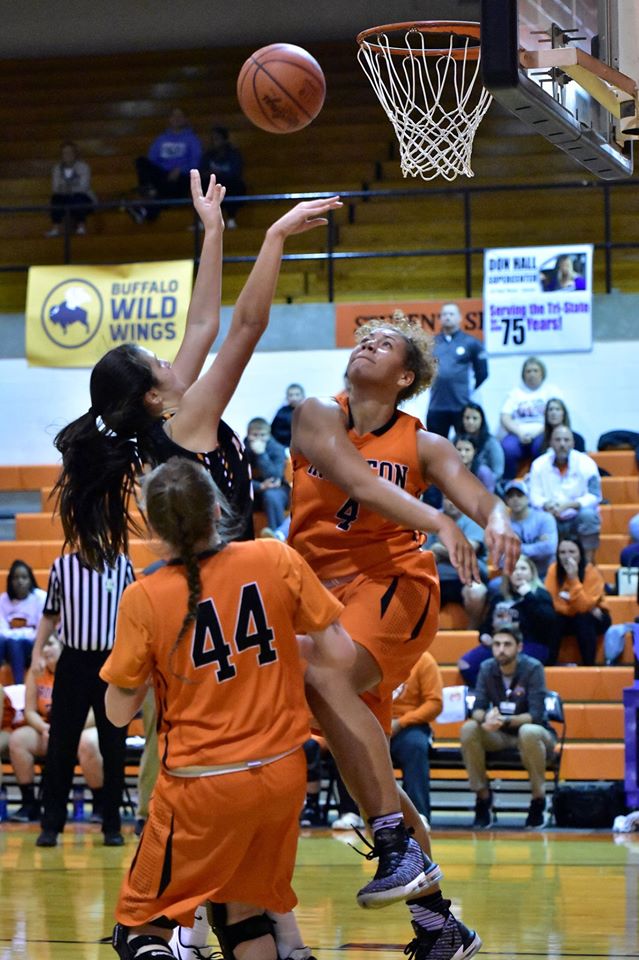 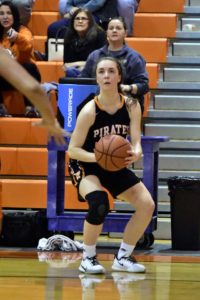 IRONTON — Unfortunately for the Lady Pirates, the threes just weren’t falling on

As a result, Wheelersburg won’t be turning the calendar into 2020 as an undefeated

That’s because, after attempting 20 three-point shots but making just three — and

of the season with a narrow 46-43 defeat inside Ironton High School’s Conley Center.

Wheelersburg is now 8-1, as the Lady Pirates played their first game since Dec. 19

—after opening the season with eight games over two-and-a-half weeks.

Ironton, meanwhile, raised its record to 9-1 — with its only loss coming at Ohio Valley

Conference rival Coal Grove by a single point (52-51) in overtime.

The host Lady Fighting Tigers took to the floor just a week ago, so any “rust” from the

often-disjointed Christmas holiday schedule seemed to have less impact upon them.

In a defensive slugfest, and at a pace better suited for the half-court, the usually three-point

fall for them at a crucial time.

None more critical than in the second half, as Wheelersburg made all three of its threes

in the first 16 minutes. 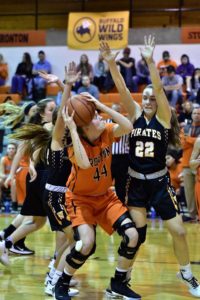 best look being by Kaylee Darnell with a minute-and-a-half remaining.

“We were frustrated offensively. Just with the physicality and with the way they were

play and get back in the game quickly. I felt like we had the mentality, especially

early, that we had to score in eight seconds. There are a lot of things we can learn

from this game, because Ironton is very good and well-coached.” 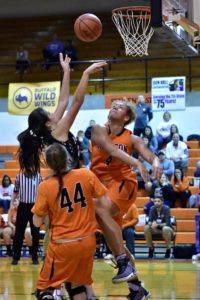 “We came up with some big defensive stops,” said Ironton coach Doug Graham.

“They (Pirates) are a perimeter-oriented team. They play five guards and they bring somebody in off the bench

who is a guard. That’s their bread-and-butter. They are going to shoot on the

perimeter, they are going to run that dribble-drive and dribble-handoff and try to catch you sleeping and helping too much in the paint. They like

to kick it out for a step-in three. If you let them do that, they are dangerous 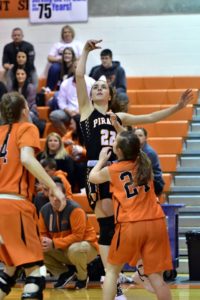 Ironton also played without guard Riley Schreck, who was out with an injured knee.

Wheelersburg shot 34-percent on 17-of-50, as the Lady Fighting Tigers limited Darnell — the Lady Pirates’ leading

“Several girls did a good job on her (Darnell). She is a tremendous player

and one of the best in the area. To hold her to eight points is a testament

to our defense,” said Graham. “Elli Williams was really tough on her for a

large part of the game. And Lexie (Arden) and Samantha (LaFon), with

their size and their athletic ability and their basketball ability, that really helped us tonight.” 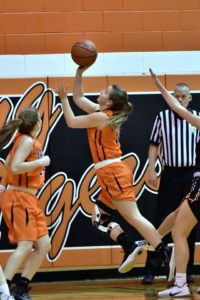 for the Lady Pirates by not making foul shots. 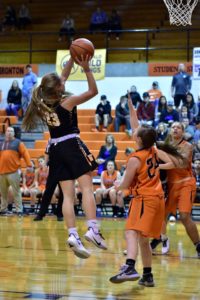 Rather than allow a possible made triple, the Fighting Tigers decided

to foul Darnell — who shot the one-and-one bonus situation, but had

to make the first but intentionally miss t

he second to keep the Lady Pirates’ possession for the tie or even the win.

Darnell drained the first for the 45-43 deficit, and her second

shot missed — but Arden amounted her

seventh and final rebound, and was fouled with 2.1 tics showing for

Arden did miss on the first of the double-bonus foul shots, but did sink

the the all-important second freebie — making it 46-43.

Ellie Kallner, who paced the Lady Pirates and all scorers with 14 points

including nine in the second quarter, launched a desperation three-quarters 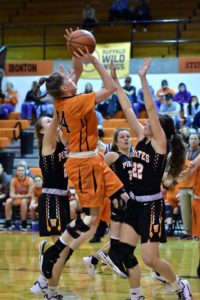 The Lady Fighting Tigers led from tipoff to final buzzer, holding a seven-point

“We have to start better. I thought we played hard, but we have to play better.

You fall behind against a good team, and usually the story is you work so

hard to try and catch up. That’s what we had to do,” said Spradlin.

“I am proud of the way we played and how we competed. But you

can’t put yourself in those situations.”

to roll over and get beat by 20 points. Wheelersburg is a good team,

and was going to fight back from seven points down. To my girls’ credit,

we withstood some of their punches and extended the lead again,” said Graham.

Wheelersburg battled back from each seven-point deficit — relying on first-half three-pointers from Kallner, Lani Irwin and Makenna Walker — but Ironton answered with first-half trifectas from Kirsten Williams, Evan Williams, Elli Williams and Arden. 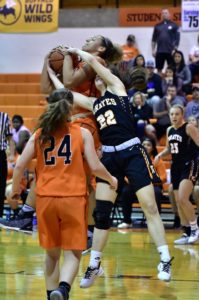 5-of-12 from three-point range in the opening half —

In the second half, the Fighting Tigers maintained their lead by going 8-of-13

at the foul line — combined with tough underneath baskets

by LaFon, either on offensive putbacks or by her simply clearing out space for herself. 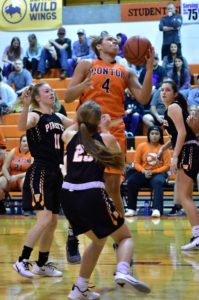 LaFon, who was just 2-of-7 in the first half with three fouls, finished with a double-double 13 points and a dozen rebounds — making five field goals and 3-of-4 foul shots.

as she, Elli Williams and Lydia Hannan had seven rebounds apiece.

eight and Kallner with seven were the top boarders for the Lady Pirates.

“We finished the defensive possessions better by rebounding better

in the second half as opposed to the first,” said Graham.

“We weren’t getting them off the floor in the first half. I bet they had five-to-seven offensive rebounds, so that is something we wanted to correct

free throw, as Keeney chipped in 10 points on four field goals and

third, but Ironton opened the first five minutes of the fourth with an

The Lady Pirates return to the road, and return to

The loss at Ironton, Spradlin said, is a lesson learned.

“You either win or you learn,” he said. “The fight was good and the energy

was good, but we have to find a way to execute better.”

Ironton, on the other hand, has a happier New Year — with its victory over

“These girls come in and practice hard. I’m very proud of the way they

played this game tonight,” said Graham. “It was a physical game, it was

a well-played game and all-around a great team effort.

Ironton next faces Fairland in the OVC on Monday night.