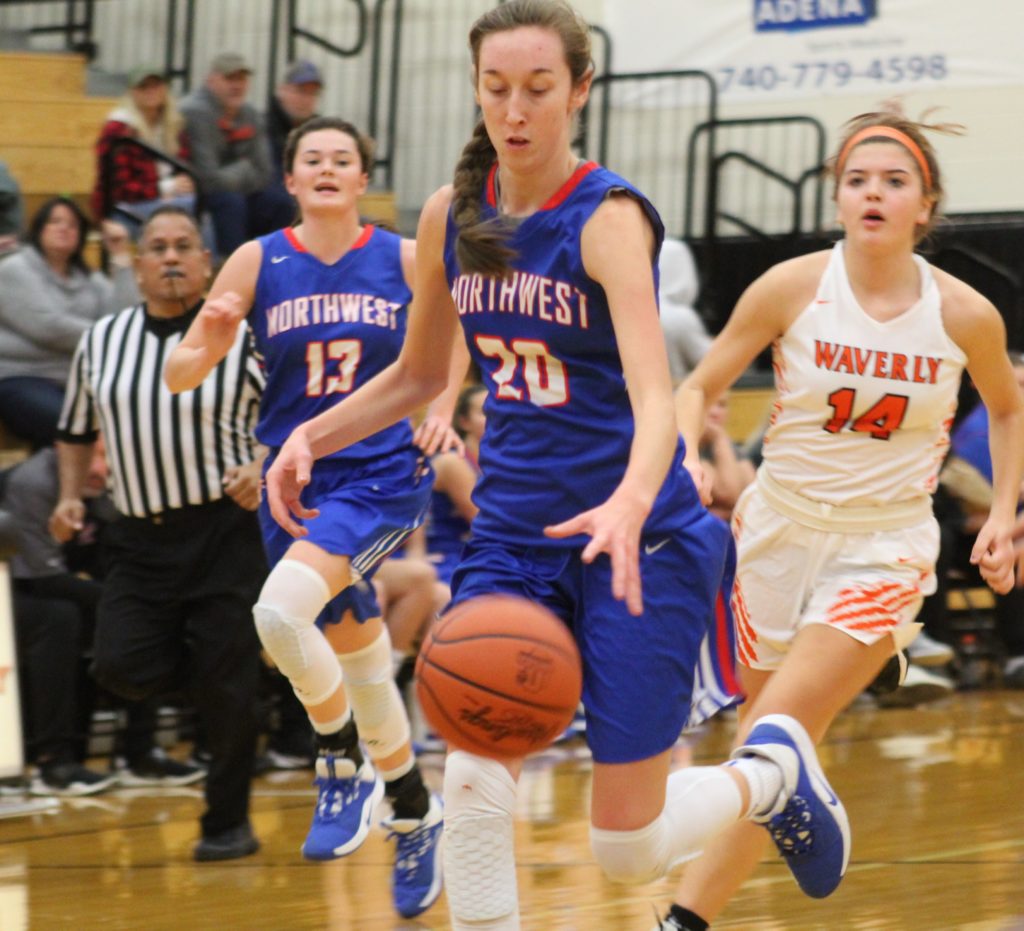 WAVERLY — For the Northwest Lady Mohawks, it indeed wasn’t the prettiest of outings on Thursday night, but it did make for the happiest of new years.

That’s because visiting Northwest — thanks to its overload of missed shots, turnovers, missed free throws and excess of execution mistakes — ended up working overtime on a rainy night at Waverly High School.

But in doing so, and fighting through their amass of adversity, the Lady Mohawks managed to rally — and escape — for a thrilling 49-47 double-overtime triumph over the Waverly Lady Tigers in a key Southern Ohio Conference Division II tilt.

It took two overtimes on Thursday to clear up the second-place picture in the rugged SOC Division II race, as Northwest now stands out as that current runner-up club to Wheelersburg — as the Lady Mohawks raised their record to 10-1 and 6-1 in the SOC II.

Wheelersburg (7-0 SOC II), with its 30-point (70-40) runaway win at Eastern, remains in first-place in the division by a full game — having handed the Lady Mohawks their only league loss.

Waverly was trying to stay within common-sense striking distance of the Lady Pirates, but instead slipped and joined a pack of now four squads with already three SOC-II defeats.

But Thursday’s affair inside “The Jungle” was indicative of this season’s SOC II campaign.

Contests are close, teams are young, games go down to the wire and, in this instance — take two overtimes to eventually decide.

While acknowledging his Lady Mohawks have a lot of aspects to improve upon, Northwest coach Dave Frantz said the girls’ growth and grit guided them to the win at Waverly.

“Both teams had a lot of turnovers, missed shots, missed free throws, and you can blame that on anything, but there were 10 girls on the court tonight at all times just battling. Neither team gave up or gave in. There was one senior on the court tonight combined. You look at the missed shots, you look at the missed free throws and the turnovers, but in the end, you overcome your mistakes by not putting your head down and keep fighting,” said Frantz. “We didn’t quit fighting. I think our girls grew up and proved that to themselves.”

For the Lady Mohawks, which had led by as much as seven points twice including 11-4 at the end of the first quarter and 14-7 at the four-and-a-half minute mark of the second stanza on an Ava Jenkins old-fashioned three-point play, faced their biggest deficit in the second overtime — trailing 46-40 following a steal and layup by Waverly’s Zoiee Smith to cap a 10-2 run over the opening two-and-a-half minutes.

However, Northwest never surrendered — and instead suddenly stunned the Lady Tigers with a 9-1 run over the remaining 1:27 to win the game.

On the ensuing possession following Smith’s steal and score, Valerie Copas came right back and knocked in a three-pointer a dozen seconds later — slicing the deficit in half to 46-43.

With 64 seconds to play, Haidyn Wamsley made a pair of one-and-one free throws, as Keirah Potts posted a pair of double-bonus makes for the 47-47 tie — following a split by Smith of the double-bonus for the Tigers.

Then, a Lady Tiger turnover on a pass that went out of bounds gave the Lady Mohawks the ball back with 35 seconds left — and Copas came through in the clutch with a driving baseline basket with 22 seconds showing.

It was the eighth — and ultimately final — lead change, as the Lady Tigers turned the ball over again with 13 seconds remaining.

However, the outcome indeed came down to the final possession — thanks to the Lady Mohawks missing two free throws with 5.4 seconds left, allowing the Lady Tigers a chance for the tie or even the win.

Waverly’s Carli Knight, whose basket forced the second overtime tied at 36-36, once again drove the lane in transition and put up a good shot at the buzzer — but it rimmed out and the Lady Mohawks had survived the slugfest.

Waverly, with only four first-period points and a first-half scoring drought which spanned seven minutes and 48 seconds, went just 9-of-19 at the free-throw line.

“Down the stretch, they made plays. That was just an old-fashioned SOC II battle with two teams showing a lot of grit, a lot of hustle, a lot of heart and a lot of effort. I was proud of my team for battling back after getting down early,” said veteran Waverly coach John Bonifield. “It just came down at the very end that Northwest executed and we didn’t. It’s a tough pill to swallow, but hopefully, we will learn from it and grow and get better as we move forward.”

Indeed, the Lady Mohawks — especially their more experienced players — made plays in the overtimes.

Prior to her game-tying free throws, Potts — the game’s sole senior in fact — put in buckets to open both extra sessions, giving the Lady Mohawks leads of 36-34 in the first and 38-36 in the second.

Her back-to-back baskets broke the first tie of 14-14, as she also scored three times in the second half.

“Keirah had been struggling a little lately, but tonight I think she put it back together. I told her on the bus ride up here tonight that we needed to have a strong game out of her. She’s our senior and she leads us,” said Frantz. “I put a challenge to her and I think she stepped up to that challenge and did what we know she can do.”

Wamsley went for 13 points on three field goals and 6-of-8 free throws — none bigger than her pair in the second overtime which trimmed the deficit to 46-45.

She scored five of Northwest’s third-period points in which Waverly made its rally and took its initial advantage — making a three-pointer for the 21-21 tie and splitting a pair of free throws.

Copas canned two deuces and two treys, including her first three as part of the 11-point first-quarter, towards 10 points.

Jenkins scored seven points on three field goals and her free throw, as only seven Lady Mohawks played compared to nine for the Lady Tigers.

Kloe Montgomery made a basket for a 30-29 Northwest edge, which was the final of the six second-half lead changes.

Northwest overcame a poor 10-of-23 from the foul line, as its defensive length in its zone made it tough on the Lady Tigers to shoot or even pass the basketball with consistency.

“Our defense all year has been our strong point. I thought we played real well defensively. We gave up four points in the first quarter and only 47 for the whole game, and that was in two overtimes,” said Frantz. “Ava Jenkins had some turnovers tonight to where I could tell she was frustrated, but she is a very tough defender and was again. We put her on everybody’s best player almost all the time.”

For the Lady Tigers, that top player would be Smith, who scored 14 points on four field goals and 5-of-6 free throws.

Her lone three-point goal tied it at 24-24 at the end of the third frame, as Paige Carter followed with five field goals for 11 points, including her basket that tied it at 38-38 with an opportunity at a three-point play in the second overtime.

Knight netted four field goals for eight points, including the Tigers’ only first-overtime points — but with seven seconds left to make it 36-36.

Kelli Stewart, who added two field goals for four points, set up Knight with a nice pass on the inbounds play — as Knight made the drive and got the game-tyer.

Michaela Rhoads recorded five points — and drained the Lady Tigers’ other three-pointer with 1:48 remaining in regulation for the tie at 34-all.

For Waverly, if only it had made one more basket or one more free throw — or committed one less turnover.

“In the league, you have to win at home and try to steal some on the road,” said Bonifield. “So losing this one and at home is almost twice as bad. It’s a great win for Northwest and we just have to regroup.”

Indeed, although not the prettiest of outings for the Lady Mohawks, it made for a super start to the new calendar year.

It was easily Northwest’s most important victory since it won with Reagan Lewis’ last-second shot at Oak Hill (46-45) on Nov. 29.

“There’s only one way to stay in second (in the SOC II), and that was to win tonight,” said Frantz. “And just like tonight, every night in this league is a battle. The girls just kept fighting and not let up. That was what won it for us.”