MINFORD — It’s no secret that these are not exactly your older brother’s Wheelersburg Pirates.

Their current roster doesn’t have the same star power of the past few successful seasons.

And, believe it or not, they had lost three football games entering Friday night’s Southern Ohio Conference Division II opener at the undefeated Minford Falcons.

But, one thing is for certain – and that’s the king is indeed not dead.

That’s because the visiting Pirates, despite being plagued by more mistakes and even forced to improvise on the fly, somehow – and someway – found a way to extend their SOC II winning streak.

Wheelersburg never trailed, got massive plays from its playmakers, and made the memorable stop on Minford’s two-point conversion try to prevail 21-20 in overtime in front of an electric and standing-room-only crowd at Minford High School.

With the victory, the Pirates – with losses to teams with a combined record now of 16-2 – pulled even to 3-3.

In easily arguably their most difficult SOC II test of the past six seasons, the Pirates pushed their division win streak to 22 games – dating back to a loss against Valley in 2013.

It absolutely wasn’t easy, but then again, these Pirates have battled injury and adversity unlike any Wheelersburg squad in at least the last half-decade.

The same was true at Minford – as the Pirates threw a pair of interceptions and opted to change quarterbacks, punted five times following three-and-out possessions, committed 10 penalties for 105 yards including three personal fouls, and even lost an onside kick following the Falcons’ first touchdown midway through the third quarter.

However, they made the big plays when they needed them the most – defensively, offensively, and on special teams.

“Every year is different, but this is a huge win for us because it’s an SOC II game. When you look at the adversity we have faced with the schedule we have played, and our guys have recognized the tall task that’s been ahead of them throughout those five weeks, I can’t say enough about our kids and the effort they put forth, especially our seniors,” said an elated Wheelersburg coach Rob Woodward. “We came in here tonight against a great team in Minford, and we faced a lot of adversity in this game. But again, all of our seniors…the battles that they have had, what a way for them to come out on top in this SOC II game.”

The Falcons, which were 5-0, found themselves on the wrong side of the scoreboard for the first time all year.

However, it remains 2009 when Minford last defeated Wheelersburg – by a 16-15 final score.

It was almost another one-point Falcon triumph on Friday, as Minford’s Matthew Risner made a simply acrobatic over-the-shoulder catch in the back of the end zone in overtime to make it 21-20.

Facing 2nd-down-and-11 from the 21-yard line, Minford quarterback Elijah Vogelsong-Lewis landed the ball where only Risner could catch it – in bounds and near the back line, but over the top of Wheelersburg’s Makya Matthews.

It was then decision time for fourth-year Minford head coach Jesse Ruby – to either kick the extra point and force a second overtime tied at 21-21, or to go for the two-point conversion and the victory.

Ruby rolled the dice and elected to go for two, but the Pirates stacked the box and brought the house against the Minford run formation.

Ty Wiget –in attempting to squeeze inside through the line – was stuffed at the goal line as a result, and the Pirates poured onto the field in a wild celebration.

Ruby, when asked about the decision to play for the win and the two points, simply said “there was no doubt”.

“I had full faith and confidence in our kids. We were playing well and moving the ball well and decided to go for the win. Our kids’ attitude and effort were great the whole game. Unfortunately, we came up just one play short,” he said. “It was so tight in there and kind of hard to see, but Wheelersburg just made a good play. It was the last of several that they made.”

And, making plays – particularly Matthews – was something the Pirates did all night.

Truth be told, none were bigger than his dead-sprint chase-down defensive effort on the game’s fourth play  – when Wiget broke free for a 52-yard run and was well on his way to the end zone.

But Matthews didn’t give up on the run, caught Wiget from behind at the 5, tomahawk-chopped the ball with his right arm out of Wiget’s hands – and the Pirates pounced on the pigskin for a stunning turn-of-events touchback.

As that play faded in the memory banks as the game wore on and advanced into overtime, it was highly discussed afterward as the night’s biggest play.

“That was just a great job by Matthews to track Ty down and strip the football,” said Ruby. “It was just an unfortunate play for us right there.”

Indeed it was, because had Wiget scored, then the Falcons would be in front four plays in – and maybe overtime is never reached.

“Makya Matthews is just a warrior. Makya is the most competitive player that I believe I have ever coached. He does everything he can on a given play to make sure that if he can make the play, he is going to make it,” said Woodward. “He was just outstanding in this game and it all started on that play.”

It then extended to the Pirates’ first touchdown with just a minute and 52 seconds before halftime.

Following a mistake-prone first half by both clubs – which featured a touchdown apiece negated due to holding penalties, 13 combined flags for 135 yards and a turnover apiece – the Pirates made a major stop of a Minford drive on 4th-down-and-inches at the Wheelersburg 24 with 2:06 remaining.

On the Pirates’ first play following the turnover on downs, Evan Horsley – who replaced an ineffective Aaron Masters at quarterback – hooked up with Matthews for a 76-yard touchdown strike that made it 7-0 with Braxton Sammons’ extra-point kick.

Matthews made the high grab of Horsley’s pass at the Wheelersburg 40, broke a tackle, then outraced Falcon defenders all the way to the end zone.

“We dialed up a big play there, Evan (Horsley) throws a floater up there, but Makya just goes up and snatches it out of the air and is able to take it all the way for a touchdown,” said Woodward.

Horsley completed three of his seven passes for 82 yards, as Matthews made two receptions for 73. 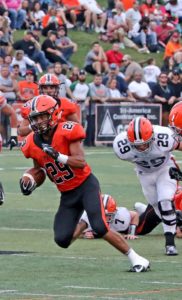 “Evan (Horsley) put this team on his back tonight. He carried the ball a number of times and grinded out those tough yards,” said Woodward. “Our offensive line was opening up holes continuously. It’s a game of big plays and battles in the trenches.”

And, also, a game of mistakes.

Besides Matthews turning Wiget’s touchdown into a touchback, the Falcons had two holding penalties for 17 yards apiece – the first of which wiped out a 67-yard scoring strike to Risner while the second stalled a Minford march to near midfield with time running out in the first half.

“Mistakes just kill you in close tight ballgames like this,” said Ruby. “Unfortunately, we had some more tonight.”

But one pass completion from Vogelsong-Lewis to Risner did not produce any penalty flags – and instead resulted in a 59-yard TD on a screen pass that began with a catch in the flat.

That occurred with 6:47 remaining in the third quarter, but Minford missed the extra-point kick – and thus trailed 7-6.

“We just kept stressing that we were still in the ballgame and had plenty of time left. We have plenty of weapons and we can score really fast. We showed that with Risner’s long touchdown reception,” said Ruby. “We just had to keep battling back.”

The Falcons then recovered the aforementioned onside kick at midfield, but that – and two other possessions – resulted in three three-and-outs, sandwiched around a Horsley interception by Minford’s Levi Warren which ended a 10-play Pirate drive and reached the red zone.

However, the next Pirate possession produced points – an eight-play, 67-yard drive that spanned 3:09 and picked up four first downs.

Matthews, whose 24-yard gainer moved Wheelersburg from the Falcon 46 to the 22, capped off the drive with a seven-yard inside run with eight-and-a-half minutes to go.

Sammons’ second successful extra-point kick made it 14-6, but Minford answered with a colossal 13-play, 61-yard, five-and-a-half minute march – ending with Wiget going in from eight yards away at the 2:51 point.

But with the Falcons trailing 14-12, they still needed the two-point conversion for the tie – and amazingly and inexplicably somehow converted it.

Wheelersburg was getting more line surge and better rushes in the second half, but a 10-play series between the 35s in the final 2:51 resulted in a turnover on downs.

In the overtime, though, the Pirates punched it in on four plays – with Matthews carrying for six yards to the 14, followed by 13 more yards to the one.

Two plays later, Horlsey hit paydirt from a yard out off tackle – and Sammons’ PAT kick made it 21-14.

Of the Pirates’ 191 second-half and overtime rushing yards, Matthews mustered 107 on 18 carries, while Horsley had 71 on 11.

“Wheelersburg was just doing a good job up front of getting movement and producing some running lanes,” said Ruby. “I thought our kids read their keys pretty well, and were flying around to the football and making them earn it, because we kept them from getting any more big plays.”

At least on offense – as the Pirates made the stop on Wiget’s two-point conversion run following Risner’s incredible TD catch in overtime.

Minford’s playmakers made a difference as well, with Wiget actually amounting a game-high 143 rushing yards on 25 carries, as Vogelsong-Lewis completed eight of his 12 passes for 143 yards and two touchdowns to Risner.

“It’s tough to cover everything Minford throws at you,” he said. “With (Matthew) Risner out there and the speed that he has, and with Wiget and Vogelsong-Lewis with the speed that they have, you have to account for both sides of the field and that was a challenge to our coaches and players.”

The Falcons’ challenge now is to recover for the remainder of their difficult SOC II slate – and get back to their winning ways which originally vaulted them to the top spot of the OHSAA Division V Region 19 computer ratings.

The Pirates and Falcons are both in Region 19 – and a potential playoff rematch is indeed a distinct possibility.

“It’s all about attitude and effort, and we just have to treat every opponent with the same respect we gave Wheelersburg. And we may very well see Wheelersburg again,” said Ruby. “We have to focus on ourselves every week, and improve upon limiting mistakes, penalties and turnovers. We have to prepare ourselves for the rest of the SOC II schedule.”

That rest of the schedule starts next week at Portsmouth West, while Wheelersburg – for the fourth consecutive week – hits the road when it takes on division newcomer Oak Hill.

Furthermore, the Pirates play at Oak Hill for the second season in a row – although that SOC II winning streak remains intact, as the king is indeed not dead.

“A huge part of high school football is mentally having your kids ready. The SOC II is strong, and we’re getting everybody’s best shot. And our number-one goal is winning the SOC II,” said Woodward. “That’s a great football team that we just beat tonight, and our kids should be extremely proud. We’re a good football team too, we just have continue to move forward and get better.”