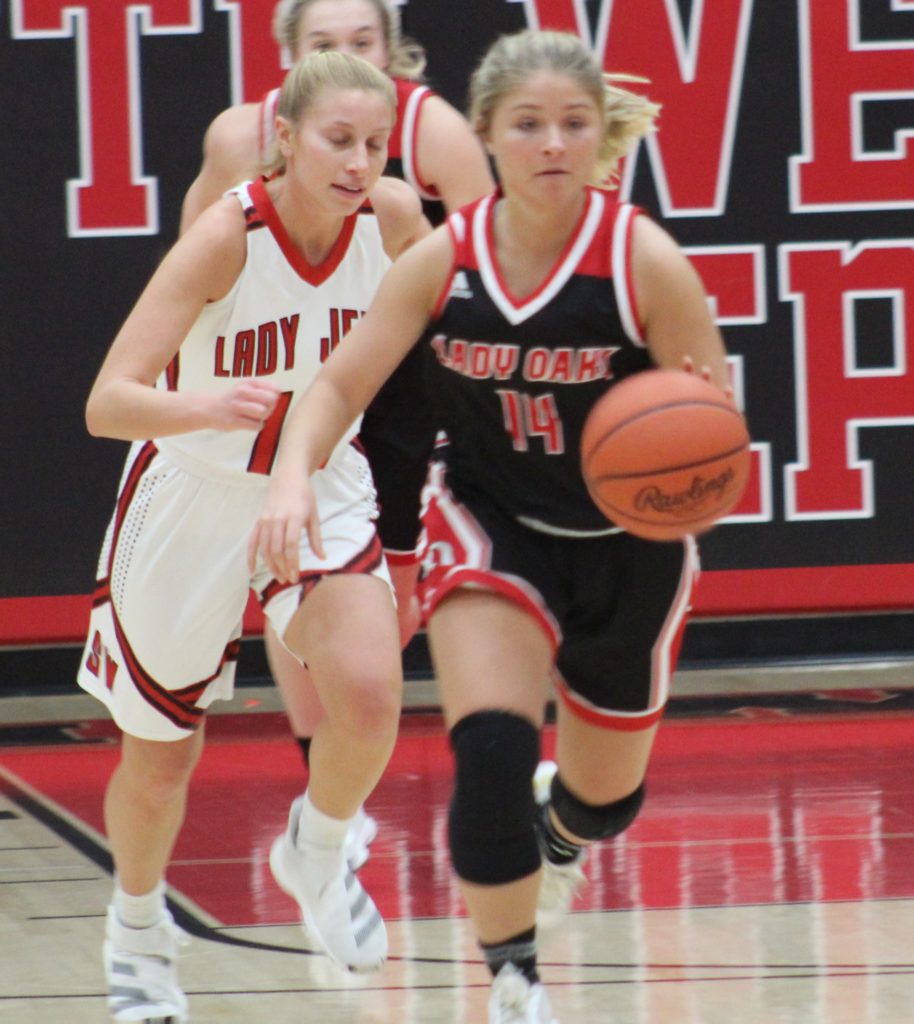 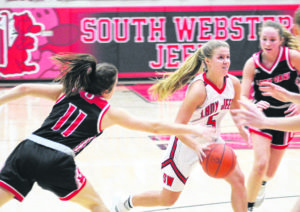 SOUTH WEBSTER — All streaks, whether good or bad, eventually come to an end.

Unfortunately for the South Webster Lady Jeeps, it’s how their six-game winning streak concluded on Thursday night that left a bitter taste in Ryan Dutiel’s mouth.

That’s because the Lady Jeeps, playing their third game in four nights, struggled shooting and mightily with turnovers —and didn’t get second-half defensive stops against the visiting Oak Hill Lady Oaks en route to suffering a 52-36 setback in a Southern Ohio Conference Division II tilt.

Both clubs are now 9-5 in the league, which stands tied for third-place behind league leader Wheelersburg (13-0 SOC II) and second-place Northwest (11-3 SOC II) —although Wheelersburg has already clinched at least a share of the division championship.

The quality win for the Lady Oaks, in arguably their best overall performance of the season, raised their record to 12-8 —while South Webster is now 11-8, having seen their six-game win streak snapped.

In fact, that fifth victory of six was against Northwest on Monday night (56-52), as the now 17-3 Lady Mohawks’ only other losses are against Wheelersburg.

Oak Hill held the Lady Jeeps to their second-lowest point total of the season, thanks to South Webster scoring just six second-quarter points and only five for the final frame.

The Lady Oaks actually trailed 11-4 only three minutes in, but then reversed course —and outscored South Webster 48-25 over the final 29 minutes.

The contest featured four lead changes and two ties throughout the opening 12 minutes and 25 seconds, as the Lady Oaks went ahead at the 3:35 mark of the second quarter on a Caitlyn Brisker basket —and never looked back from there. 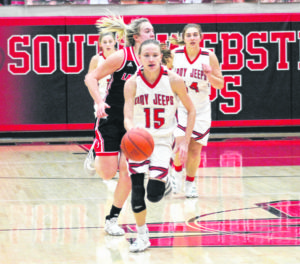 Truth be told, it was an intense Oak Hill unit that appeared on Thursday night — as the Lady Oaks’ physicality took its toll in tiring out and cooling off the red-hot Lady Jeeps.

“It’s a great win for us. South Webster has been an up-and-coming team and improving all year. We got into a real good flow for the game and just real proud of how we handled it,” said veteran Oak Hill head coach Doug Hale. “We had a lead late, kept control of it, made some foul shots late and really guarded them. South Webster is as tough as they come in our league and if you can go out on get road wins in the SOC II, they are huge. We are glad to get one so late in the year too.”

Speaking of late, the Lady Oaks struggled in the second half of their 52-43 non-league loss against Notre Dame on Monday —after doing so against the Lady Jeeps in the two teams’ initial meeting at Oak Hill, which South Webster won 40-29.

On Thursday, South Webster was within 28-24 after scoring five straight third-period points, but a 13-7 run over the final 4:20 of the quarter extended Oak Hill’s lead to double figures —where it remained the rest of the way.

Brisker, the Lady Oaks’ senior standout, bucketed a game-high 27 points on eight total field goals and 8-of-9 free throws —including all four of her fourth-quarter attempts.

She scored 16 points in the opening half — on five total field goals and 4-of-5 foul shots —including 10 in the Lady Oaks’ opening-quarter comeback.

But, it was her third of her three three-point goals that proved to be her biggest shot —as she beat the third-quarter buzzer by dribbling between her legs, staring down her defender, squaring up and knocking down a trifecta from the wing.

That made it 41-31, and Oak Hill was just fueling up — while South Webster was running out of gas.

The Lady Jeeps only played six players on Thursday — in again the third challenging contest in four days.

The Lady Oaks’ excellent ball movement made South Webster chase and not make necessary defensive plays, especially rebounding the basketball in the second half.

“Towards the end, fatigue maybe played a factor, because we didn’t substitute a lot and we were making some mistakes defensively. But you can’t take away anything from Oak Hill. They were aggressive like they normally are, and we just didn’t bounce back the way we should,” said SWHS coach Dutiel.

Early on, it appeared as if South Webster was in a groove —as the Lady Jeeps scored seven straight points on a pair of Bri Claxon free throws, Kenzie Hornikel hitting the squad’s only three-pointer, and Claxon corralling a defensive rebound and pulling up for two to make it 11-4.

However, the Lady Jeeps’ only other points in the final five first-quarter minutes were a Rose Stephens basket at the 3:25 mark.

The Lady Oaks, including Brisker’s second three-ball, outscored South Webster 15-2 over those final five minutes —and took their second lead at 15-13.

Brisker’s first triple gave Oak Hill its initial advantage at 3-2 at the 6:45 mark.

Then, in the second stanza — and plagued by multiple missed shots and empty possessions — South Webster went a stretch of six minutes and 55 seconds without a single solitary point.

Baylee Cox converted two free throws for the 15-15 and final tie, as Faith Maloney made a putback basket off a steal just 43 seconds into the period. 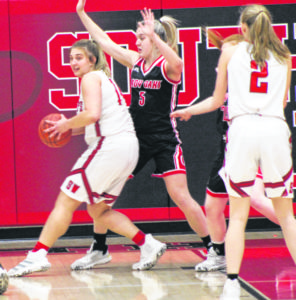 The next South Webster point, though, came with just 22 seconds remaining —when Maloney made a steal and layup for a 22-19 deficit.

“That defensive stretch for us in the second quarter was huge. It built confidence,” said Hale. “Our girls’ energy and intensity was good and strong all night.”

Olivia Clarkson, who followed Brisker with 15 points on five field goals and 5-of-9 free throws, capped the first half with an old-fashioned three-point play with 13 seconds left.

The second quarter seemed to be where the Lady Jeeps’ legs lost strength.

South Webster won at Eastern on Wednesday night in an SOC II makeup matchup (60-47), but had to withstand several Eagles’ rallies in doing so.

“I didn’t call a timeout, and maybe that is something I should have done. But that’s where the legs are a little bit tired from playing a tough game last night. Playing that kind of schedule, three in four nights, for high school kids is tough on anybody,” said Dutiel. “And they contested every shot and were very physical, and a lot of things just didn’t go our way.”

Still, South Webster was only down 28-24 with four-and-a-half minutes remaining in the third, but they couldn’t contain Clarkson, who scored eight of her 15 in the canto on three field goals and 2-of-2 free throws.

Oak Hill had two-point goals from Brisker, Baylee Howard and Chloe Chambers as well, as Howard — who added eight points on four field goals — had two key offensive rebounds after missed free-throw opportunities in the fourth.

The Lady Oaks amassed an 18-12 advantage in total field goals, and attempted 20 free throws —with Brisker bagging her final 8-of-8.

“When we played them (Lady Jeeps) at Oak Hill, we had a halftime lead and we just didn’t finish. They outplayed us. We came out in the second half tonight and finished. I thought Caitlyn (Brisker) came back to get the ball late in the game where she hasn’t been doing that. It’s nice to have our best ball-handler and foul shooter have the ball in her hands,” said Hale.

South Webster’s top scorer —Claxon —led the Lady Jeeps with 10 points on three field goals and 4-of-4 free throws, while Cox chipped in nine on two fourth-quarter field goals and 5-of-6 foul shots.

Besides Cox’s baskets, the Lady Jeeps’ only other fourth-quarter marker was a Hornikel foul shot, as she ended up with eight points —after scoring seven points in the first frame.

Maloney split a pair of third-quarter free throws for five points, while Stephens scored another deuce in the third for four.

Claxon was coming off a massive season-high 33-point performance at Eastern, but definitely wasn’t expected to duplicate that effort against Oak Hill’s lockdown and pressing defense.

Dutiel did say he was “very proud of the way we battled and never gave up, and that’s an encouraging sign coming into tournament season.”

“The streak of six games, that is something we really needed. It was good for our team and a lot of confidence came from that. But going into an Oak Hill-South Webster game, everything goes out the window and it’s a street-fight,” he said. “Oak Hill is a tough team and Doug (Hale) has been around a long time and he knows the game really well. Any time you play his teams, you have to be prepared because they are well-coached.”

Oak Hill hosts Valley in the SOC II on Monday night, while South Webster will round out the regular season with another three games in a four-night week next week —starting on Monday night at Portsmouth West.