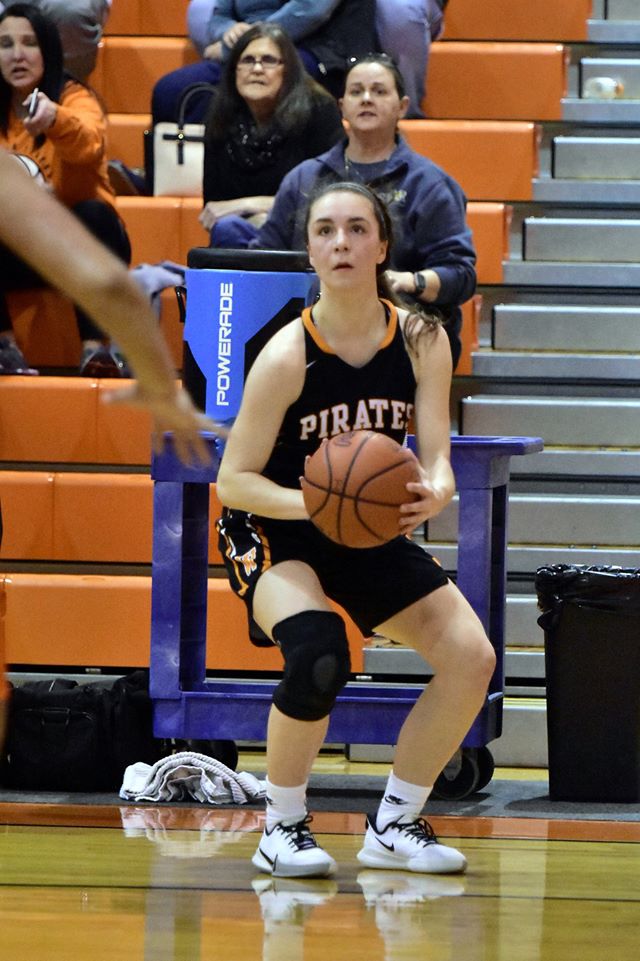 IRONTON — For this season anyway, at least through the first 48 minutes they played there, the iron at Ironton High School’s Conley Center was unkind to the Wheelersburg Lady Pirates.

That said, in the end, if only the Lady Pirates could have —or would have — shot in the first half like they did in the second on Saturday against the Russell (Ky.) Lady Red Devils.

That’s because Wheelersburg fell behind by as much as 26 points twice in the third quarter, only to furiously storm back and finally — and miraculously — get to within four points with only five seconds remaining, before falling 62-57 to Russell as part of the annual Tackett’s Body Shop Shootout at Ironton High School.

For the Lady Pirates, they have 17 victories on the season — en route to earning a share of the Southern Ohio Conference Division II championship, and being ranked seventh for the second consecutive week in the Associated Press Ohio High School girls basketball Division III poll.

But Wheelersburg’s only now two setbacks have come inside Ironton’s Conley Center, as the Lady Pirates shot just 3-of-20 from three-point range — en route to losing at Ironton 46-43 back on Dec. 30.

Now indeed Ironton is a good defensive team, and so is the now 16-6 Lady Red Devils, which forced Wheelersburg into 5-of-22 (23-percent) first-half shooting — including 1-of-9 (11-percent) from three-point land.

They also turned the Lady Pirates over a dozen times, which is out of character for Wheelersburg, especially given how smooth — and so often — it executes its half-court dribble-drive and kick-out oriented offense.

Combine that with Russell shooting 15-of-25 from the field in the opening half for a sizzling 60-percent, including 13-of-19 from inside the arc for a fiery 68-percent against the smaller Lady Pirates, and Wheelersburg was down by as much as 45-19 and 48-22 midway through the third quarter.

Russell had amassed 19 points apiece in each of the opening two periods, and another 10 markers through the first four minutes of the third.

However, in a dramatic tale of two halves — or actually the final 11 minutes and 13 seconds to be precise — Wheelersburg began to catch fire from the field, and outscored the Lady Red Devils 35-14 over that same span.

The Lady Pirates popped five second-half three-pointers, spearheaded by 13 second-half points from Alaina Keeney and another dozen from freshman Makenna Walker —and ultimately erased the 26-point deficit down to just four at 61-57 with five seconds remaining.

But Kaeli Ross, who was named Russell’s Most Outstanding Player and who poured in a game-high 21 points on seven total field goals and 3-of-4 free throws, registered the second of a double-bonus foul-shot situation to make it 62-57 with just three seconds to play.

Wheelersburg coach Dusty Spradlin said he was plenty proud of his Lady Pirates for charging back, but wishes — of course — the first 20 minutes had played out differently.

“I honestly didn’t think our energy was very good in the first half. When you are not making shots and then you have somebody else who is making shots, there were times it was just way too easy for them (Red Devils). Some of that is how good they are, and some of that is we have to be better defensively. But I give our kids credit for crawling right back into the game when they could have folded,” said Spradlin. “We just didn’t play with any kind of urgency in that first half. In the second half, we played with all kinds of urgency, but there was nothing else to do at that point.”

After trailing 2-0 on a Kaylee Darnell basket just 46 seconds in and then again at 5-2 on Keeney canning a three-pointer on the next Lady Pirate possession at the 6:50 mark, the Lady Red Devils —one of the top programs in Kentucky’s 16th District —didn’t allow another field goal for the next nine-and-a-half minutes.

In fact, the only Lady Pirate points over that span were a pair of Darnell free throws at the 1:47 mark of the opening quarter.

By then, the experienced and speedy Lady Red Devils —which featured three frontcourt starters at each six-foot tall combined with the 5-9 senior Ross and eighth-grade sensation Shaelyn Steele — dialed up 10 consecutive points to lead 15-7.

Speaking of 15-7, that was the total in which Wheelersburg was outrebounded by Russell in the opening half —in which it trailed 19-7 after the first quarter and 38-15 at halftime.

Ross — who rained in four of the Lady Red Devils’ six three-point goals including a key one in the fourth quarter to temporarily trip up the Lady Pirates’ remarkable rally — recorded her second three with 21 seconds left in the second stanza for Russell’s largest lead by that point.

Ross amounted 14 first-half points, including her three-pointer that tied it at 5-5, as Steele scored 12 in the first 16 minutes —part of 18 for the entire game on seven total field goals and 3-of-7 free throws.

“They have size underneath, they have a really good point guard (Steele) in the eighth-grader, they have another shooter (Ross). There are a lot of matchup troubles with them,” said Spradlin. “When you help off too much on the point guard, you’re giving the post player a layup and you have another shooter that you have to worry about who can score off the catch or the drive.”

The Lady Red Devils’ lead soon swelled to 45-19 on Ross’ third-quarter three, followed by Bella Quinn connecting on her trifecta for the 48-22 advantage.

But Wheelersburg’s Walker and Ellie Kallner countered with threes to make it 48-31, as the Lady Pirates trailed 48-33 following three.

The Lady Red Devils’ only other points of the period were a Kate Ruggles basket and two free throws from Aubrey Hill, who had 10 first-half points on four first-quarter field goals and 2-of-2 second-quarter foul shots.

Walker, who was named Wheelersburg’s MOP with 14 points on five total field goals and 3-of-3 freebies, drove in for an old-fashioned thee-point play to make it 48-36 with 6:34 remaining — followed by Keeney converting another three for a 50-39 deficit 56 seconds later.

Keeney and Darnell delivered a team-high 15 points apiece, and sandwiched a Lady Pirate pair of triples around Ross’ for Russell for a pair of nine-point (55-46 and 58-49) deficits.

Steele scored at the two-minute mark to make it 60-51, but the Lady Red Devils didn’t make their free throws in the fourth —meshing just 4-of-10 after opening the first three quarters 8-of-8.

Ross, however, hit her second attempt with only three tics to go —making it 62-57 and the Lady Pirates unable to charge back any further.

The end also kept Darnell from scoring her 1,000th career point on Saturday, as she sits just two points shy of the milestone — and will most likely get it early on Monday night in the Lady Pirates’ SOC II tilt against Eastern.

Kallner chipped in two deuces in addition to her trey for seven points, as she also led Wheelersburg with eight rebounds —  and dished out eight assists.

Lexie Rucker in the second quarter, and Macee Eaton and Brittani Wolfenbarker in the third, added a basket apiece for the Lady Pirates.

Spradlin said his squad put forth a “fantastic effort” in the second half.

“I like to play teams that are good and see what we have to work on. We obviously shot the ball better in the second half, but it’s funny how those things happen. We always talk about how those things are contagious,” he said. “The good body language is contagious and the bad body language is contagious. In the first half, we felt a little sorry for ourselves because they were making shots and we weren’t. It’s so easy to get down on yourself. Our effort and body language was so much better in the second half, and it seemed like our shooting came along with that.”

The Lady Pirates, as aforementioned, play on Monday night against visiting Eastern —with an opportunity to lock up the SOC II championship outright.

At least, with three regular-season tilts to go, Wheelersburg won’t be returning to Ironton this season — where the iron was indeed unkind.