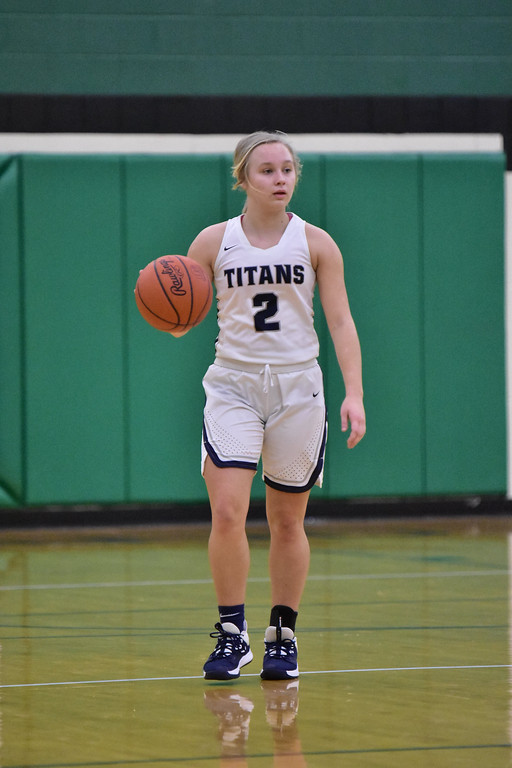 IRONTON — Unfortunately for the Notre Dame Lady Titans on Saturday, it was a four-quarter contest — not three.

That’s because the Lady Titans’ second-quarter struggles simply doomed them against Ashland — as Notre Dame did not make a single solitary field goal in the period, and ultimately it fell short in its comeback against the Lady Kittens 52-41 inside Ironton High School’s Conley Center as part of the annual Tackett’s Body Shop Shootout.

Not one field goal — a two OR a three —for the Lady Titans in the second eight minutes, part of an epic and entire scoring drought that spanned a total of six minutes and 34 seconds.

As for the failure to make a single shot, that total time stretched from the 1:37 mark of the opening quarter until the 6:41 juncture of the third frame.

For those into clock-watching, that covers an elapsed time of 10 minutes and 56 seconds.

Otherwise, aside from that second quarter, the Lady Titans would have won 40-36 —thanks to a pair of 14-point second-half quarters after leading 12-8 at the end of the first.

In that second half, Notre Dame —a Division IV program playing Ashland, which is the equivalent of at least a large Division II team in Ohio — did make a strong rally, erasing a 14-point (27-13) deficit with 6:54 remaining in the third quarter all the way down to three points three minutes and four seconds later.

However, Ashland senior Julia Parker —who poured in a game-high 22 points including four three-point goals and a perfect 6-of-6 free throws in the final two minutes — popped a three on the ensuing possession, and the Lady Titans never got any closer.

The loss was just Notre Dame’s second of the season against 18 victories — as the Lady Titans were coming off capturing another outright Southern Ohio Conference Division I championship on Thursday night.

But, both defeats have come against MUCH larger schools, as Ashland’s enrollment —in grades nine thru 12 — is 882 compared to a mere 106 students for Notre Dame.

Two weeks ago, the Lady Titans raced out to an 18-point first-half advantage on Spring Valley — a Class AAA program in West Virginia — only to completely lose that lead and fall 64-57.

This time, on Saturday, after opening up a 12-5 first-quarter advantage at the 1:37 mark, the Lady Titans’ struggles started sooner.

Notre Dame committed seven of its nine turnovers in the second quarter, but more obvious was its poor shooting — and subsequent inability to get stops on the defensive end.

In fact, the Lady Titans took just eight floor shots in the second —five of which were from three-point range.

In all, Notre Dame dialed up 21 three-point attempts, as Ava Hassel hit the club’s only pair —on the game’s opening possession and again with 4:46 remaining when the Lady Titans trimmed the deficit to five (40-35) for the first time in exactly 15-and-a-half minutes.

Not to mention, they missed four of their six free throws in the second stanza.

“We have not shot the ball well for the last three games, and all three games have been on the road, and that has a lot to do with it. I didn’t think our shot selection was necessarily bad tonight, but we had chances in the second quarter to make some free throws, and we missed some easy bunnies and a couple open looks from three. When we’re not making shots, we can’t dictate what we want to defensively. We turned the ball over and we had some missed assignments too,” he said. “Aside from that second quarter, I thought we played pretty well against a really good team. But no field goals, I don’t know if that’s ever happened to me in a quarter in my life.”

If that wasn’t wrong-sided history enough to be part of, then Taylor Schmidt saved the day and averted the stanza shutout — with a split of free throws at the 3:03 mark.

It didn’t help that the Lady Kittens canned three three-pointers in the period, including a pair by Parker and one by Jada Miller — for a 24-13 halftime advantage.

Parker — the Lady Kittens’ Most Outstanding Player —pumped in her first trifecta to trim the deficit to 6-5, then Carley Cullup connected from long distance to close the first quarter at 12-8 and opened the third canto with her other three-ball.

Finally, Notre Dame’s Claire Detwiller ended its drought after almost 11 full minutes —before Detwiller and Hassel had old-fashioned three-point plays only 50 seconds apart to get the Lady Titans to within six at 27-21 at the four-and-a-half minute mark.

From there, the Lady Kittens maintained a lead of six, seven or eight points over the next 7:45, before Hassel hit her second three —and Ashland turned the ball over as Schmidt scored to make it 40-37 with 3:50 remaining.

But Parker, from the corner pocket, splashed her fourth and final —and most impactful —triple, as Notre Dame didn’t score on it next possession while Parker posted her second deuce of the period on the possession following.

Hassel had another old-fashioned three-point play to make it 45-40 with 2:19 to go, but Ashland scored seven of the final eight points —with Hassel hitting a foul shot with 1:48 left for the Lady Titans’ final marker.

“Besides that second quarter, I thought it was a pretty even game,” said McKenzie. “I’m not going to say Ashland is head and shoulders better than us, because I think we are a pretty good team, but they had a better day shooting than we did. We just couldn’t get over that hump once we got down double digits. And we couldn’t get that extra stop tonight, although Ashland has pretty good offensive players. I was really proud of the resiliency of the girls.”

Cassie Schaefer had a third-quarter field goal to round out the Notre Dame scoring.

In addition to Parker, Mikayla Martin made five field goals for 10 points for the now 14-6 Lady Kittens, and grabbed nine rebounds before fouling out with 2:41 to play.

The Lady Titans return home, and return to non-league action, on Monday night against Minford.

The Lady Falcons are a Division III program, but McKenzie prefers his Lady Titans see what they are made of against bigger schools.

Had it not been for that second quarter on Saturday, maybe Notre Dame does knock off the Lady Kittens from Kentucky.

“I want us to play much bigger schools and against good competition. I am proud of how the girls handled it and came together today,” said McKenzie. “Just wish our shots start falling again.”

Notre Dame wraps up the regular season, and an opportunity at another undefeated SOC I campaign, when it hosts Green on Thursday.