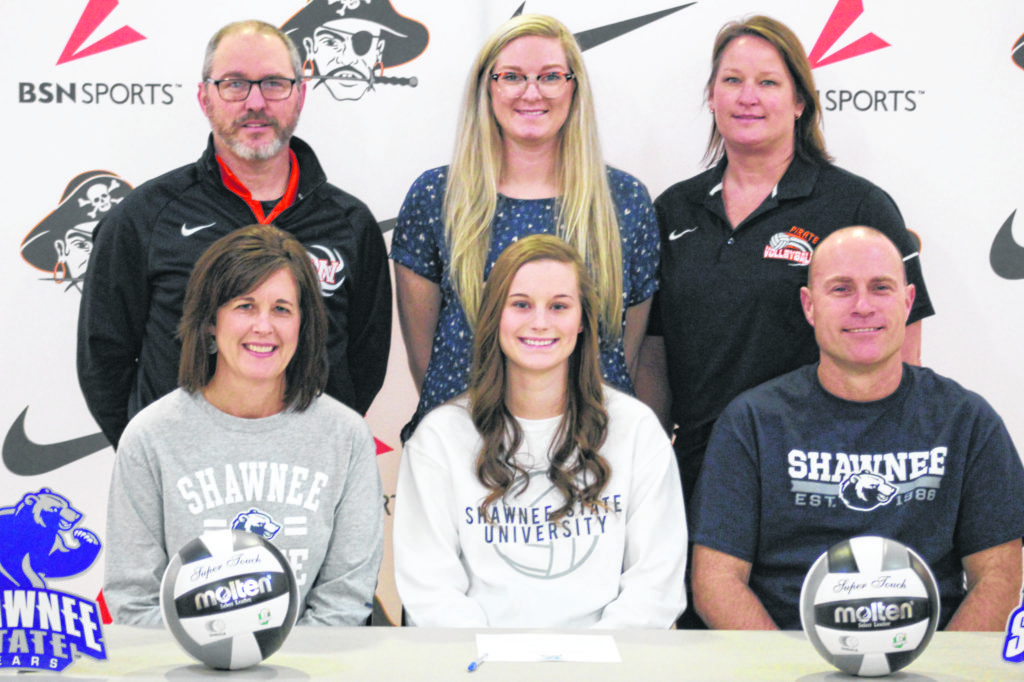 While Wheelersburg’s chapter came to an end with a state tournament berth, her latest narrative started officially on Wednesday morning —when McQuay announced her intention to play college volleyball with the close-to-home Shawnee State University Bears.

Last season, the five-foot 10-inch middle hitter McQuay —and fellow senior Mallory Bergan —co-captained the Lady Pirates all the way to the program’s first-ever regional championship in the sport.

In addition, by being named the District 14 Coaches Association Division III Player of the Year, McQuay captured first-team all-Ohio honors.

She now becomes a Bear, but more importantly continues playing for four more years the sport she simply loves.

“Four more years of the sport I love to do. I’m very excited about it,” said McQuay.

She should be, as Shawnee State is roughly 20 minutes from Wheelersburg —and remaining nearby for her family and friends to watch her play was important.

The Bears are an NAIA Division I program, although they are currently interviewing and continuing the hiring process for a new head coach.

Susan Shelton, the coach of the past nine seasons, resigned f0llowing the 2019 campaign.

The Scioto County native Scarberry, who served as Shelton’s assistant for five years, remains on the staff —and naturally has been heavily involved in the recruitment of McQuay.

Although, McQuay said she wanted to stay home —and go far.

“I knew I didn’t want to go far for school, and so I’ve been talking to programs and probably the farthest is like three hours away. I just kept narrowing it down and narrowing it down, and Shawnee is really just a good fit,” she said. “I’m not going to have any debt, it’s close to home, I can run up to church on Sundays and my family is around.”

Volleyball began at Wheelersburg High for McQuay as — in fact — a family affair, as her sister was a Pirate senior when she was a freshman.

She played primarily in a reserve role that year, but still saw 72 sets worth of match action.

In her final three seasons, as Perry took over the program in McQuay’s sophomore year, the Lady Pirates captured the Division III Southeast District championship —with her senior season co-captaining along with Bergan.

“I loved playing here at Wheelersburg,” said McQuay. “My sophomore year, were really started to get better and explode. We won districts and made it to the regionals, but we didn’t do anything and got swept. But this year, we just said we’re making it.”

Did the Lady Pirates ever.

This year, Wheelersburg rolled to another Southern Ohio Conference Division II title, and went a perfect 22-0 in the regular season — without losing even an entire set in 61 sets played.

“At team camp, we hadn’t had any practices, and we were looking so good. We just told ourselves that we’re going to do it. We came and worked hard every day, and just had that mindset that nothing was going to stop us,” said McQuay.

Of course, that consecutive sets won streak is a program record —as the Lady Pirates played exactly 73 sets before finally losing one, or actually the first two, in the regional championship match against Hiland.

“It’s just really cool to say we did that. Not many teams across the country can say they won 73 sets in a row,” said McQuay. “It just kept our momentum rolling and we kept telling ourselves that streak is not going to end. And even when it did end, we said our season is not over. We still have some time.”

Indeed, as Yogi Berra would say, it isn’t over until it’s over.

That’s because in absolutely epic, unbelievable and miraculous fashion — and even facing match point by the Hawks in the third game — Wheelersburg avoided elimination by scoring the final three points to stunningly win that set 26-24.

The Lady Pirates then won the fourth set 25-20, and simply dominated the fifth and decisive set 15-5 to punch their ticket to their history-making — yet coveted — state tournament.

“We just worked hard and believed we were going to do that (advance to state). As a senior and as a co-captain, I wanted to go. I did NOT want to lose,” said McQuay.

The Lady Pirates finished 27-1 in 2019 — after also going 22-0 in the regular season the year before, while finishing 26-1 and losing to state power Tuscarawas Valley in the regional final.

McQuay’s career ended at Wheelersburg with her amassing 791 kills in 315 sets played.

She played in at least 72 sets all four years, while consistently recording 268 kills as a sophomore, 255 as a junior and 254 as a senior.

She also had at least 577 attacks over those final three seasons, including 633 as a junior.

Her hitting percentage for her career was .302, as she also collected 134 blocks including 40 solo —and served up 151 aces.

Perry praised McQuay’s work ethic and commitment to the sport — and said she was the Lady Pirates’ “go-to” gal.

“Alli is a hard worker, she studies the game, and is just very dedicated to the game. I couldn’t be more proud of her than today,” said the coach. “As a sophomore, when I took over the program, she was already well-trained. She had played for club teams and stuff like that for so long, so her game was well-developed. Just her maturity as a player developed for three years. She developed into a great court leader, and someone whom we looked for when we needed that crunch point. She was clutch. Anytime that we were struggling, we would look for her. She is just a smart player, she can put the ball down and get us a point. There were a lot of schools looking at her, but I’m just excited for her to be able to play at Shawnee State for herself. I know she wanted to be there.”

McQuay said she will be a right-side hitter at the collegiate level, and expressed a desire to improve upon her overall strength.

“I just need to get stronger all around. That will significantly help my play,” she said. “And I’m going to outwork everyone until I make it on the court.”

She said she is undecided upon a major, but knows she wanted to be a Bear.

Indeed, it’s Shawnee State all the way for McQuay —just the latest positive vibe in her decorated career.