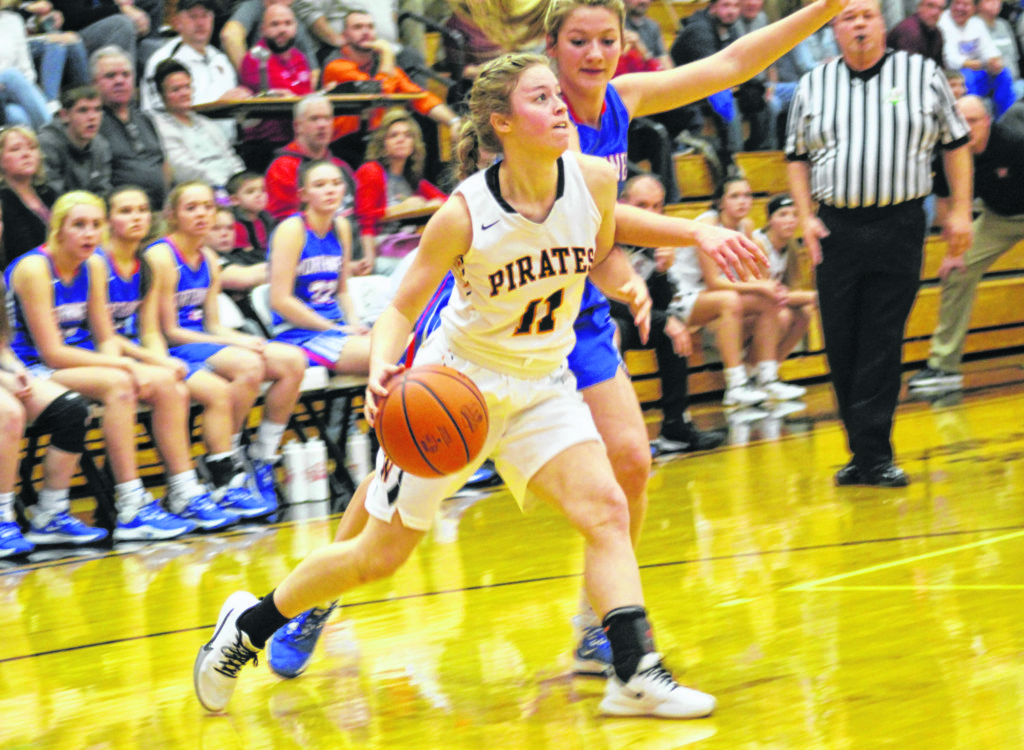 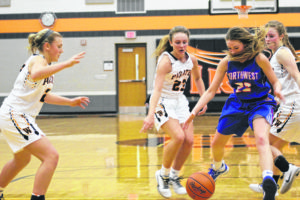 WHEELERSBURG — While Wheelersburg will fire away, and often make, three-point goals each and every outing — the Lady Pirates indeed get defensive like nobody’s business.

And, after all, championships —especially in basketball —are won with the defensive end, and the host Lady Pirates pitched a gem of such against the Northwest Lady Mohawks in Thursday night’s massive Southern Ohio Conference Division II tilt.

With first-place in the division at stake, Wheelersburg — the defending SOC II champion and current league leader —stymied the Lady Mohawks for 32 points over the final 28 minutes and 52 seconds, and captured a critical 56-42 victory in its bid to go back-to-back and wire-to-wire.

After limiting the Lady Mohawks to their season-low of 35 points in a 44-35 triumph back on Dec. 12, Wheelersburg went at least four minutes and 50 seconds — TWICE — without allowing a single solitary Northwest first-half point.

By the end of the third quarter, the Lady Pirates pushed their advantage to their largest at 17 points (45-28), before fending off a hard-charging Mohawk comeback bid that actually closed the gap to nine points (47-38 and 49-40) twice.

In fact, the Lady Mohawks had a chance to get within seven with three minutes remaining, but missed a shot from short range —as Ellie Kallner and Makenna Walker canned back-to-back three-pointers to end the threat and salt the win.

And, it wasn’t just any ordinary win for Wheelersburg.

More importantly, they are now better by the dozen atop the SOC II — with a 12-0 league record and only four more league duels left.

The loss left Northwest with a 16-2 record, and an 11-2 tally in the division — with its only two defeats coming against the Lady Pirates.

If Wheelersburg wins its two SOC II road shows next week, including at Minford on Monday night and at Waverly on Thursday night, it will clinch at least a share of its second straight SOC II championship.

What won Wheelersburg Thursday night’s return bout was its lock-down defense, its depth and its experience — as the Lady Pirates forced 21 turnovers compared to only committing six, and went nine deep compared to only six for the Lady Mohawks’ majority minutes.

Following Northwest racing out to a 10-2 lead in a matter of three minutes and eight seconds, including a three-pointer by Haidyn Wamsley right off the opening tip, the Lady Pirates simply put the clamps down.

The Lady Mohawks had 13 first-half turnovers, attempted only 19 first-half shots, and amounted just eight points over the final 12 minutes and 52 seconds of that opening half.

“Our goal is always to try to make things as tough as possible on people. From the point it was 10-2, we were really good defensively and we forced some tough shots. They finished with 18 in the first half. It was a lot of kids too, because we rotated in a lot of kids tonight. We wanted to use our depth to make it as difficult as we could on them,” he said.

The Lady Pirates did just that, as eight of the nine that played reached the scoring column —with only Alaina Keeney reaching double figures for a game-high 14 points, on five field goals and 3-of-4 free throws.

Wheelersburg led for the final 23 minutes and 25 seconds, as the Lady Pirates put together nine unanswered points in the final 4:35 of the opening period —taking their first lead at 11-10 on a big Brittani Wolfenbarker three-pointer off the bench.

With Wheelersburg leading 13-12, she pulled the trigger again —and splashed another trifecta to truly get the Lady Pirates kick-started.

“We’ve been saying for some time that one of these nights, a team is going to catch one of her good shooting nights. Brittani is a kid who can shoot the ball really well. She has shown some flashes like that,” said Spradlin. “She came in tonight and hit those two pretty quick ones. Those role players, those bench players came in and were important for us.”

Kallner, who followed Keeney with nine points, connected for her initial three-pointer to make it 19-14 with 6:13 remaining in the second quarter —and Northwest never was within five points for the final 21 minutes and five seconds.

Northwest coach Dave Frantz said “Wheelersburg is the most athletic and quickest team we’ll see all year, no doubt”.

Frantz, the Lady Mohawks’ track and field coach who is familiar with that Lady Pirate program, also discussed how deep and quick they are.

“They bring in several girls off the bench, but they are athletic with that. Their depth and athleticism hurt us tonight,” he said. “It was a physical game too, and I felt like they out-physicaled us at times. That’s where we have to just learn.”

Lexie Rucker, who played in the second quarter, also helped out.

But, the Lady Pirates play so well as a team that Darnell doesn’t necessarily need to go off for 20-plus points every single night.

Especially defensively, as Northwest went the final 4:52 of the first quarter without a point —as well as a 4:50 stretch of the second period.

After Wamsley scored to get the Lady Mohawks to within 19-16 with 5:43 to go before halftime, Wheelersburg went for nine more unanswered — including Lani Irwin’s three that made it 24-16 with 3:07 showing.

Keirah Potts, the Lady Mohawks’ sole senior and who paced the guests with 11 points on five total field goals, ended the epic droughts both times.

With Wheelersburg leading 28-18 at halftime, Keeney spearheaded the third-quarter onslaught, scoring eight of her 14 in the canto, including her only three-pointer that made it 43-28 with 30 seconds remaining.

Walker then made a steal and layup on the next possession, resulting in a 34-18 outscoring of the Lady Mohawks in the middle two stanzas — as Wheelersburg was up 45-28 following three.

The Lady Pirates held a 20-18 advantage in total field goals, but scored 21 points off seven three-pointers — and made more foul shots (nine) than Northwest even attempted (seven).

Spradlin said his team had to settle down offensively after the slow start, which it did.

“I thought they (Lady Mohawks) got a little tired in stretches, and I thought our ball movement and offensive rebounding was good all night. We also did a good job of picking our points, knowing when to pull up and shoot the little short jumper and when to keep driving and draw some contact. Northwest’s length comes into play, and even when we get around some of their defenders, you still have to finish over top of them. They are big, they are athletic, they are well-coached and they all play hard with a lot of intensity and effort,” he said.

And, as Frantz said, they don’t give up.

Potts played with a serious flu-bug, and Reagan Lewis was the only substitute of two total which played in all four quarters.

Wamsley wound up with nine points on four field goals, as Valerie Copas scored seven, including a three-pointer to make it 8-2 and another to get the Lady Mohawks to within 47-38 with 4:22 remaining.

Trailing 49-40, the Mohawks missed an excellent opportunity to get within seven —and were outscored 7-2 over the final 2:45.

After Kallner and Walker’s threes made it 55-42, Kallner split a pair of free throws for the final point.

“Our girls never gave up. We go down 17, the next thing we get it back to 12, then get it back to nine twice. We came here ready for the fight, and I thought we gave a fight,” said Frantz. “Keirah Potts missed the last two days of school…sick as can be. She never came out of the game tonight and she wasn’t going to. She was going to be our senior leader. Some of these girls never came out of the game.”

Frantz was asked if he would like a third matchup with Wheelersburg — which would, of course, occur in the Division III postseason tournament.

Thursday’s contest sure felt like a tournament tilt — with a good crowd in attendance for both clubs.

“Wheelersburg is one of the best teams in the area. But our girls will welcome a matchup with anybody,” he said. “We would love to see Wheelersburg again, which means we would both have advanced pretty far. Dusty (Spradlin) does a nice job with his girls, and the best team won tonight. But we’ll bounce back. We will. I am very proud of our girls and how hard we worked and prepared for this game. Just wish we could have came out on the other (winning) end.”

That was what Wheelersburg did —to now take a stranglehold on the SOC II.

“We have four league games and two non-league games left,” said Spradlin. “This is a good win for us, but there’s no rest. We’ll get back to work and hopefully we can continue to finish this regular season strong.”

Wheelersburg will travel to Greenup County on Saturday for one of those two non-league encounters, while Northwest will return to the road —and return to SOC II action —on Monday night at South Webster.