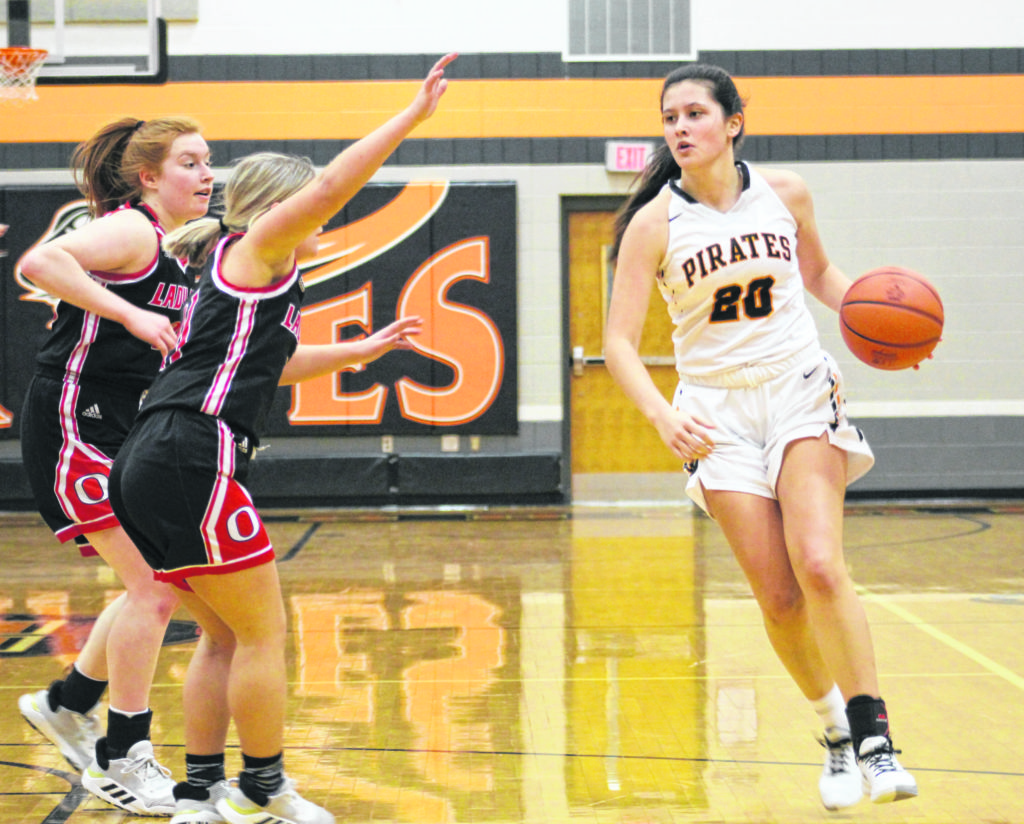 WHEELERSBURG — Usually, any game against the tradition-rich Oak Hill Lady Oaks is a “big” one —and not exactly a “trap” matchup.

But on Monday night, ahead of Thursday night’s massive encore against visiting Northwest, the host Wheelersburg Lady Pirates played the Lady Oaks in what amounted to that “trap” tilt for the Orange and Black.

However, no worries for Alaina Keeney and her Lady Pirate company, as Wheelersburg avoided any traps — or speedbumps —on its road to meeting the Lady Mohawks.

That’s because Keeney canned half of the Lady Pirates’ 10 three-point goals, Kaylee Darnell drained four herself, and Wheelersburg rolled to a 58-40 Southern Ohio Conference Division II victory and completed the season sweep of Oak Hill.

“Teams are going to try and do different things against us the second time around, but it was another great effort by our kids where we did a lot of good things again,” said Wheelersburg coach Dusty Spradlin. “Overall, another good win in the SOC II to keep us plugging along here.”

The Lady Oaks’ only lead was at 2-0 just 15 seconds in, as the Lady Pirates reeled off the next 10 points over the next three minutes — and Wheelersburg began to bomb away from three-point land en route to the runaway win.

The Lady Oaks only got to within 10-4 in the opening quarter and 17-12 in the second on a Baylee Howell three-pointer, as it was Wheelersburg unleashing a fury of threes over a span of 16 minutes.

Against Oak Hill’s zone or junk defenses, the Lady Pirates popped 10 total trifectas —five from Keeney towards her game-high 19 points, four from Darnell towards her 16 points, and one from Ellie Kallner which made it 8-2 early in the first quarter.

“That’s where the good ball movement and unselfish play comes in,” said Spradlin. “Alaina (Keeney) really made them pay. Last game, it was Ellie (Kallner) which made West pay. Tonight, Oak Hill tried to guard three of our kids (Keeney, Kallner and Darnell) and put two others in the paint. It’s important for us to be ready for those things, make good decisions and make sure we get good shots every trip.”

With the victory, the Lady Pirates —the defending SOC II champions and current league leaders — raised their stellar record to 14-1, and are now 11-0 in the division.

They also cleared the way for Thursday’s SOC II bout against Northwest, which is 11-1 in the league (16-1 overall) —as Wheelersburg won 44-35 at Northwest on Dec. 12 for the Lady Mohawks’ only loss.

More on that one in a bit.

Typically, a meeting with the Mohawks might serve as a “trap” for the Lady Pirates — in anticipation with a showdown against Oak Hill, one of the most successful girls basketball programs in Ohio under veteran head coach Doug Hale.

Wheelersburg completed the season sweep, as the Lady Pirates captured a 49-34 victory at Oak Hill on Dec. 9.

They didn’t make 10 treys that night, but Wheelersburg’s excellent ball movement had the Lady Oaks chasing on Monday —and often times the Lady Pirates’ three-ball attempts were wide open.

Wheelersburg attempted 29 threes, so while their 34-percent from beyond the arc might not sound the greatest, the 30 points off those 10 certainly does.

Keeney connected for the opening three followed by Kallner, as Keeney’s second splash from distance made it 13-4 halfway through the first period.

In the second stanza, Darnell drained one at the five-minute mark to immediately answer Howell hitting hers only 40 seconds earlier, as Oak Hill was never within eight the remainder of the way.

In fact, Keeney’s corner-pocket shot secured a double-digit advantage at 25-14, as the Lady Pirates never allowed their lead to dip into single digits for the final 19 minutes and 40 seconds.

Keeney’s fourth three made it 32-18 for the Lady Pirates’ largest first-half margin with 1:23 remaining, as the five-foot nine-inch sophomore scored 14 of her 19 in the opening half.

But Wheelersburg wasn’t done dialing in from deep.

Keeney, from the top of the key on the opening possession of the third quarter, connected again —before three more from Darnell upped the advantage to the Lady Pirates’ largest margin each time (40-23, 43-23 and 46-25).

Wheelersburg held a commanding 50-32 advantage following the third frame, as both squads scored eight points in the fourth for the 58-40 final score.

Some of the rebounds went long, where Wheelersburg’s guards —Lani Irwin and Lauren Jolly —just gathered up the ball and kicked out to either Keeney, Kallner or Darnell.

Wheelersburg outrebounded Oak Hill 12-5 in the first quarter alone to set the tone, and had some possessions of two, three or even four offensive boards.

“We don’t have a true post player, so we try to rebound with our speed and our athleticism,” said Spradlin. “We get Lani (Irwin) and Lauren (Jolly) gravitating to the ball a lot of times. And when they get it, they are really good about getting it out to open shooters. Alaina made a couple of hers off those. “

Brittani Wolfenbarker, by splitting a pair of fourth-quarter foul shots, rounded out the Wheelersburg scoring.

She sank a three-pointer in the second quarter, as all 18 of her markers came over the final three periods.

Spradlin said it was important for the Lady Pirates not to let Brisker get going early.

“She (Brisker) is a tough matchup. She is so physical and so athletic. We try to put different people on her, and when she is knocking down that three, it makes her even harder to guard,” he said. “Doug (Hale) is putting her in positions to where she can get to the basket with some of the ball-screens. I thought we did a pretty good job, for the most part, to holding her to 18 and them to 40.” 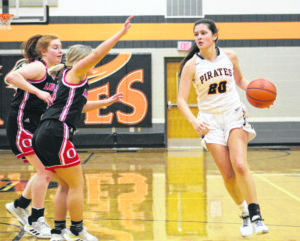 Oak Hill, which only played seven players and was without Peyton Miller once again with a broken nose, had eight points on four field goals from Chloe Chambers — and six first-quarter baskets by Olivia Clarkson for six.

Oak Hill hosts Waverly on Thursday, while Wheelersburg welcomes Northwest with first-place in the SOC II at stake.

The Lady Mohawks have won several close encounters on the road —including at Oak Hill, Waverly and Minford.

Northwest will be taller and longer than the Lady Pirates, so first and foremost —Spradlin said —rebounding will be a focus.

“We’re going to have to rebound the ball really well, and not just in stretches like we did tonight, to compensate for their length and athleticism,” he said. “Hopefully, we get some great efforts and everybody hitting on all cylinders offensively on the same night.”

Indeed, Thursday’s affair is a “big” game — as the Lady Pirates avoided the Lady Oaks’ “trap” on Monday night.

“Northwest has the one loss to us, they’ve won a lot of close ballgames, and I expect Thursday to be a close ballgame,” said Spradlin. “Two good teams fighting for first-place in the conference. What else can you ask for?”