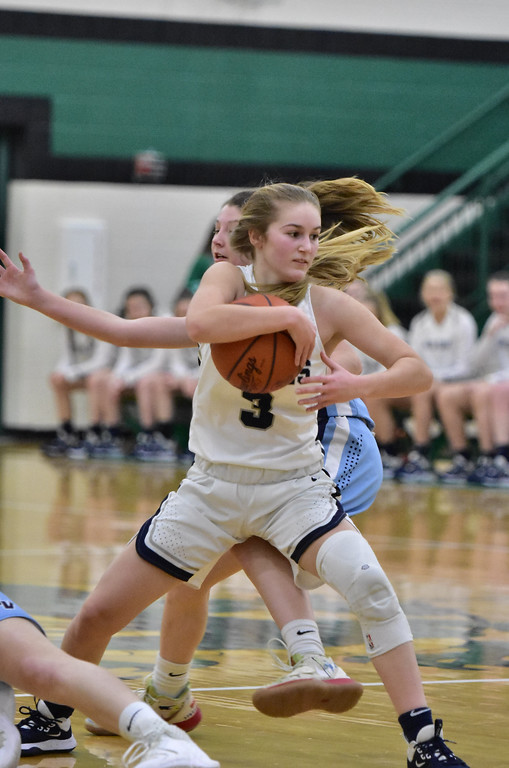 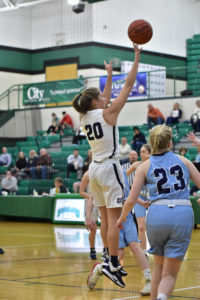 PROCTORVILLE — Unfortunately for the Lady Titans on Saturday, it was not the tale of two halves they wanted to hear.

As a result, Notre Dame’s undefeated season — in its bid for an amazing three in a row in fact — saw itself come to an abrupt end.

After an on-fire first half in which the Lady Titans charged out to an 18-point lead, the big-school Spring Valley (W. Va.) Lady Timberwolves went off for a monster comeback — and outscored Notre Dame 41-21 in the second half en route to handing it a 64-57 defeat for the Lady Titans’ first setback of the season.

The contest was part of the annual Tri-State Hoops Throwdown event, held inside the Carl York Center on the campus at Fairland High School. 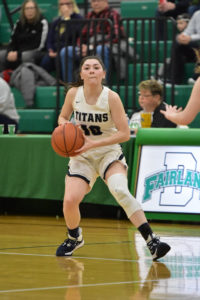 Although there is much more basketball to be played, the Lady Titans surely would love to have Saturday’s second half — and even the final two minutes of the first half — back.

Following an Ava Hassel free throw for Notre Dame, the Lady Titans took a commanding —or so it seemed — 32-14 advantage with four minutes and 38 seconds remaining in the second quarter.

Even Isabella Cassidy canning a three-pointer from the top of the key at the 2:10 mark to make it 36-19 — there wasn’t a worry that this game could get away.

By the halfway point, the defensive-oriented Lady Titans had already forced 14 Timberwolf turnovers, stymied Spring Valley into 7-of-26 shooting for a cool 27-percent, outrebounded the West Virginians 25-16, and had splashed five three-pointers including three from Hassel.

Not to mention, Notre Dame’s Claire Detwiller dominated on the inside with 10 first-half rebounds and nine points, and Spring Valley’s two tallest players —Caroline Asbury and Ella Edwards —had already picked up three personal fouls.

But, as Newfound Glory once sang, it was all downhill from here.

In a roaring rally, the young Timberwolves went kamikaze on the Lady Titans — nearly doubling them up in each of the final two quarters 23-12 and 19-9.

Simply put, Notre Dame got to playing way too fast, took too many quick shots, committed 13 turnovers in the second 16 minutes — and most importantly saw its nearly 20-point lead and its undefeated season evaporate with it.

The Timberwolves — which had held leads of 7-4 and 9-6 — took their first lead since the 1:45 mark of the first quarter with five minutes remaining to break a 52-52 tie. 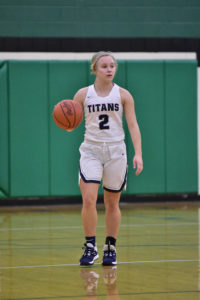 Detwiller scored 30 seconds later for a 54-54 deadlock, but Spring Valley reeled off the next 10 points for its largest advantage — as ND’s Cassie Schaefer sank a three-pointer with six seconds left for the 64-57 final score.

With the loss, the Lady Titans — the second-ranked squad in the second weekly Associated Press Ohio High School girls basketball poll —fell for the first time in 15 tries this season.

It also ended their attempt for a remarkable three consecutive undefeated campaigns, which means Notre Dame won all 44 regular-season affairs over the past two years — before capturing the first 14 for this season. 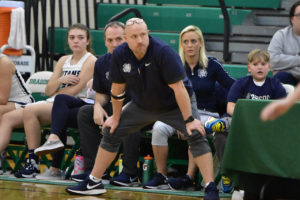 Notre Dame’s only losses the last two years were in the Division IV regional semifinals —against Waterford two years back and to Peebles last March. 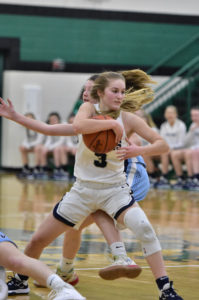 On Saturday, Notre Dame coach J.D. McKenzie did something he hasn’t done in three seasons — give a postgame media interview following a loss.

“We had a really good first half, but late in the second quarter, we rushed some shots, turned the ball over a couple of times, and they cut into an 18-point lead (32-18) to make it a 14-point lead (36-22). I still thought we had a great first half, and we talked about coming out in the second half and trying to extend that lead. We knew the third quarter would be huge, but we had a terrible third quarter and they had a great third quarter,” he said. “Uncharacteristically, we turned the ball over 20 times, we missed 22 threes, we took a lot of quick shots. They made us play fast, and they basically did to us in the second half what we did to them in the first half.”

Spring Valley, by bringing full-court pressure, either turned the Titans over — or sped them up to where they were rushing so many shots.

It also impacted Notre Dame defensively, as in the fourth quarter the Timberwolves were going right at the rim —and the Titans simply couldn’t stop them.

All nine of the Timberwolves’ fourth-quarter field goals were inside the arc, including three from Asbury, who poured in nine buckets for 18 points —seven of which were in the second half.

Asbury also grabbed 11 rebounds, as it was her offensive board and assist to Jenna Christopher that lifted the Timberwolves back in front 54-52.

Spring Valley — which raised its record to 7-4 and is the equivalent of a Division I or large Division II school in Ohio — had just six second-half turnovers, and outrebounded the Lady Titans 19-12 over the same span.

The Timberwolves bagged three threes in the third, including two by Sydney Meredith, who also netted two treys in the opening period.

Meredith paced Spring Valley with 19 points on six total field goals and 3-of-3 free throws, while Brea Saunders —whose second-quarter three-ball at the 1:30 mark to make it 36-22 and actually jump-started the Lady Timberwolves’ comeback —scored 11.

Asbury added eight points on four baskets in the tide-turning third frame, as her field goal just 15 seconds into the fourth made for a final one-point deficit at 48-47.

McKenzie said the Timberwolves were having their way with scoring in the second half.

“That’s the one, the defensive end, that hurts. We talked about eliminating this team’s easy buckets. We did that in the first half, made them work for everything. In the second half, they got some run-outs, they got some second-chance opportunities, we were late on some close-outs and assignments,” he said. “And truthfully, it looked like we got tired in the second half.”

McKenzie continued by explaining the fatigue factor, as Notre Dame —with the exception of its season-opening win over South Webster (46-44) and its Southern Ohio Conference Division I victory over New Boston (66-52) — has dominated its opposition to this point.

“Most of our starters through our first 14 games are probably averaging two-and-a-half quarters of play a night. That’s on me as a coach to get them in better shape in practice,” he said. “I didn’t do a very good job tonight either, but we have experienced girls out there playing for us. This should be an eye-opening experience for them not to play rushed and in a hurry and sloppy. The shots that we normally make weren’t falling and we turned the ball over way too much, we didn’t communicate well enough defensively and we got wore out.”

Detwiller did her part to pace the Lady Titans, amassing 19 points on eight field goals and 3-of-5 free throws.

The six-foot junior center was named Notre Dame’s Player of the Game, as she also ripped down a game-high 17 rebounds.

Hassel hit her 19 points on three twos and four treys, as her three trifectas for the first quarter spearheaded the Lady Titans’ 22-9 early advantage.

The Timberwolves led 9-6 at the three-minute mark —only to see the Lady Titans tear off for the final 16 points of the stanza.

Cassidy connected for three triples towards 11 points, as her third-quarter three made it 39-24 with seven minutes to play.

From there, though, Spring Valley vanquished its deficit by posting the next 14 points over the next four-and-a-half minutes.

The Timberwolves went ahead five-and-a-half minutes later, and outscored the Lady Titans 14-5 for the five-minute and 12-second finish.

McKenzie was upset about the loss, but cares more about his Lady Titans learning from their mistakes.

Moreover, Notre Dame doesn’t have any time to wallow about it either, as it returns to non-league action on Monday night by visiting Valley.

“I don’t care about being undefeated or what our record is. I hate losing more than I like winning, but the only thing I care about when we lose is that we better learn from it. I’m mad that we got beat, but I am going to be more mad if we don’t learn from this and if this doesn’t get their (Titans) attention and show them how much harder we have to work every day if we want to achieve our goals,” said McKenzie. “Hopefully, this is a good learning experience for us.”