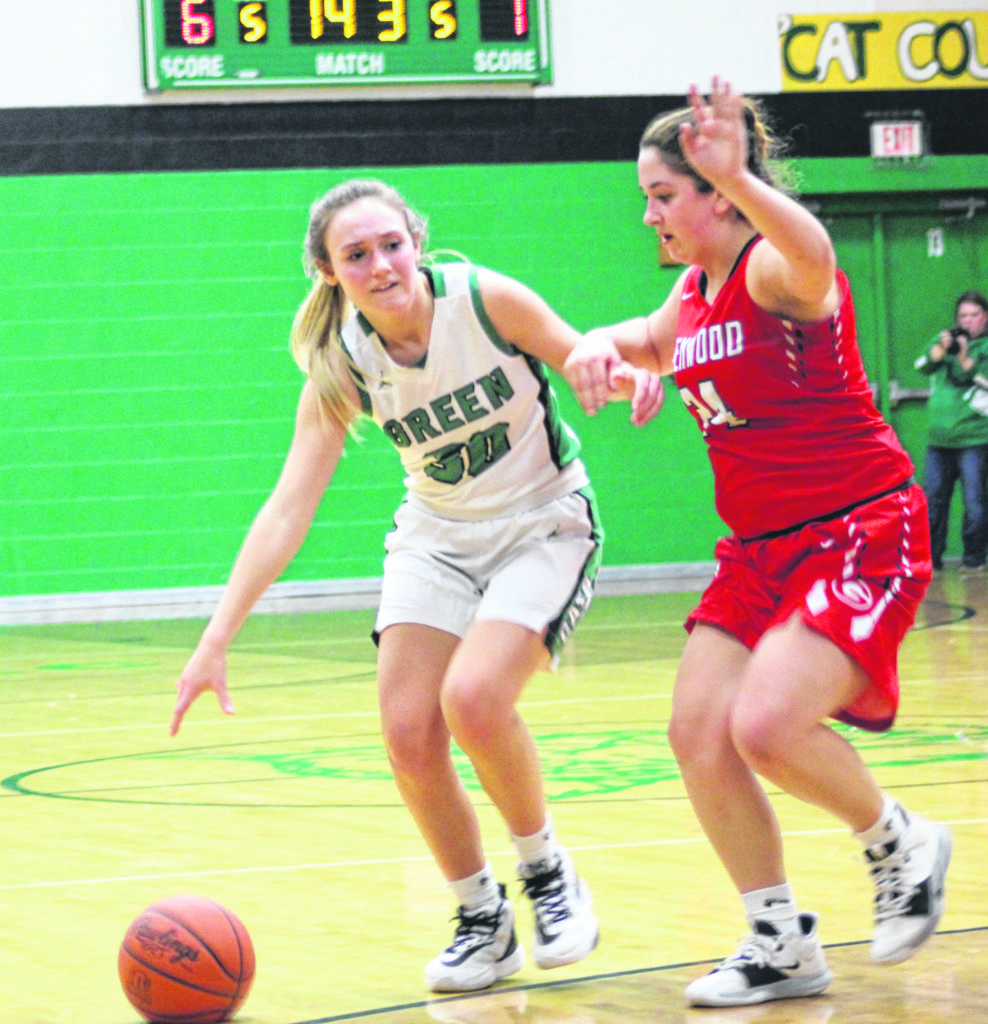 FRANKLIN FURNACE —Simply put, Green got the memo, got its offense going, got defensive against the New Boston Lady Tigers, and ultimately got a big win.

That’s because the host Lady Bobcats — after scoring the opening dozen points — buckled down and turned back the Lady Tigers 48-35 on Thursday night in a girls basketball battle for second-place in the Southern Ohio Conference Division I.

Green indeed made the Lady Tigers see red, racing —or more like trotting —out to a 12-0 lead with only minute remaining in the opening quarter.

The Lady Bobcats never trailed, as Anna Knapp with three and Kasey Kimbler with two canned all five of Green’s three-point goals over the opening 19 minutes and 48 seconds — aiding the Lady Bobcats to a 29-20 advantage midway through the third period.

In the final canto, Green got field goals from Kame Sweeney (two) and Kimberly Brown (one), but the Lady Bobcats definitely enjoyed their parade to the free-throw line in the fourth —an 11-of-20 effort as they were in the one-and-one bonus situation at the 5:15 mark before reaching the double-bonus with a minute-and-a-half remaining.

The Lady Tigers, from the one-minute mark of the first quarter until the four-and-a-half minute mark of the fourth, trailed anywhere from three to 10 points —before Green gained a pair of 15-point advantages at 40-25 and finally 42-27.

With the victory, the Lady Bobcats pull even with the Lady Tigers for second-place in the SOC I —as both are now 9-2 and trail league-leader Notre Dame (11-0) by two full games.

Green — now 12-4 — gained a season split with New Boston, as the Lady Tigers took the initial matchup in December 70-50.

“Huge win for us,” said Green coach Melissa Knapp. “We beat a very good basketball team this evening. This gets us back tied for second (in the SOC I). This was a total team effort.”

Only seven Lady Bobcats played and five scored, but the Bobcats’ balance on offense was much more evident on Thursday — compared to most contests senior-less Green has played.

Green — or either team actually — got on the board finally with four minutes and 20 seconds to play in the first period, as Knapp nailed two consecutive three-pointers for an 8-0 advantage at the two-minute mark.

In the second stanza, the Lady Tigers trimmed the deficit to 17-14 and 19-16, but Knapp netted a two-pointer on a short jumper at the 2:20 juncture, then —just left of the key —connected for her third and final triple to make it 22-16 with 1:38 left before halftime.

From there, the Lady Bobcats led by at least six points the remainder of the way.

Coach Knapp said shooting from the perimeter, and conversely defending New Boston on the three-point arc, were two of the Lady Bobcats’ primary goals.

Both clubs finished with 14 made field goals, but Green hit five threes while the Tigers tallied none.

“We know the (Lexus and Sammy) Oiler sisters can shoot the basketball, so that was huge for us to hold them to no threes. And Anna (Knapp), we always talk about getting that third shooter or scorer to be consistent. That’s three threes for her two straight nights. We’ve been lacking that third scorer,” she said. “It’s been Kasey (Kimbler) and Kame (Sweeney), but if we can get that third scorer, maybe even a fourth scorer…”

Kimbler followed Knapp with 13 points on two twos and two threes, along with 3-of-6 second-half foul shots.

Charli Blevins went 4-of-6 at the stripe in the fourth, including splitting the final free throws with 23 seconds left for the final score.

Those foul shots came courtesy of a technical foul on New Boston coach Kayla Wiley, who picked up her second technical and was subsequently ejected. 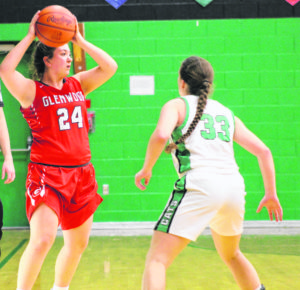 The Bobcats buried all 15 of their made free throws over the final three quarters, including 13-of-24 in the entire second half.

The Tigers trailed 31-25 only nine seconds into the fourth quarter, but Green ran off nine unanswered markers over the next three minutes and 20 seconds for its largest lead at 40-25.

As a result of falling behind, New Boston brought full-court pressure defense, but the Lady Bobcats beat it often times —and eventually the Lady Tigers had to foul.

Coach Knapp said cutting down the turnovers led to a confidence-booster for her group.

“The last game, we were in the driver’s seat most of the game until the fourth quarter. So I was having flashbacks. This time, the pressure didn’t bother us. I expected them to press, and we’ve worked and worked and worked against that press. Once our girls figured out that we weren’t going to turn the ball over, we played with confidence,” she said. “We didn’t come into this game scared. So many times when we had a big game early in the season, we were nervous. We were not nervous by any means at all tonight. We have kids who can break the press and take the ball to the rack and try to score.”

Lexus Oiler, amid two first-half fouls, amounted 15 points to pace the Lady Tigers — on five field goals and a perfect 5-of-5 free throws.

Of New Boston’s 70 points in the first meeting, Green gave up 31 of those in the fourth quarter.

This time, the Tigers — against the Bobcats’ man-to-man defense — turned the ball over too much and missed way too many shots.

Lexus Oiler’s field goal at the minute-mark and Whitley’s basket with 15 seconds left were New Boston’s only first-period points.

From there, the Lady Tigers played catch-up, and only got as close as three points twice (17-14 and 19-14) in the second quarter.

“Our defensive effort was much better. We played them zone the last time, we played them triangle-and-two and box-and-one. I didn’t feel our man-to-man was where it needed to be. In this game, we played straight up man-to-man,” said Coach Knapp. “That’s my thoughts pretty much every game we play now. I don’t have to sit and worry about what junk defense we’re going to play to stop their best player. I’ve got kids that are sitting down and playing defense. That was obviously the main difference. We gave up 31 points in the fourth quarter the last time we played them.”

On Thursday, all the Lady Tigers totaled was 35.

Green, meanwhile, goes out of conference — and across the bridge into Kentucky — to face Raceland on Tuesday night.

Knapp said it is important for her Lady Bobcats to build off arguably their best victory of the season so far.

She hopes they get the memo on that as well.

“Anything can happen on any given night. So we have to savor this victory tonight and it’s back to the drawing board tomorrow. There are still more games to be played,” said the coach. “Just assuming we’re going to finish in second (in the SOC I), that’s NOT how this works.”