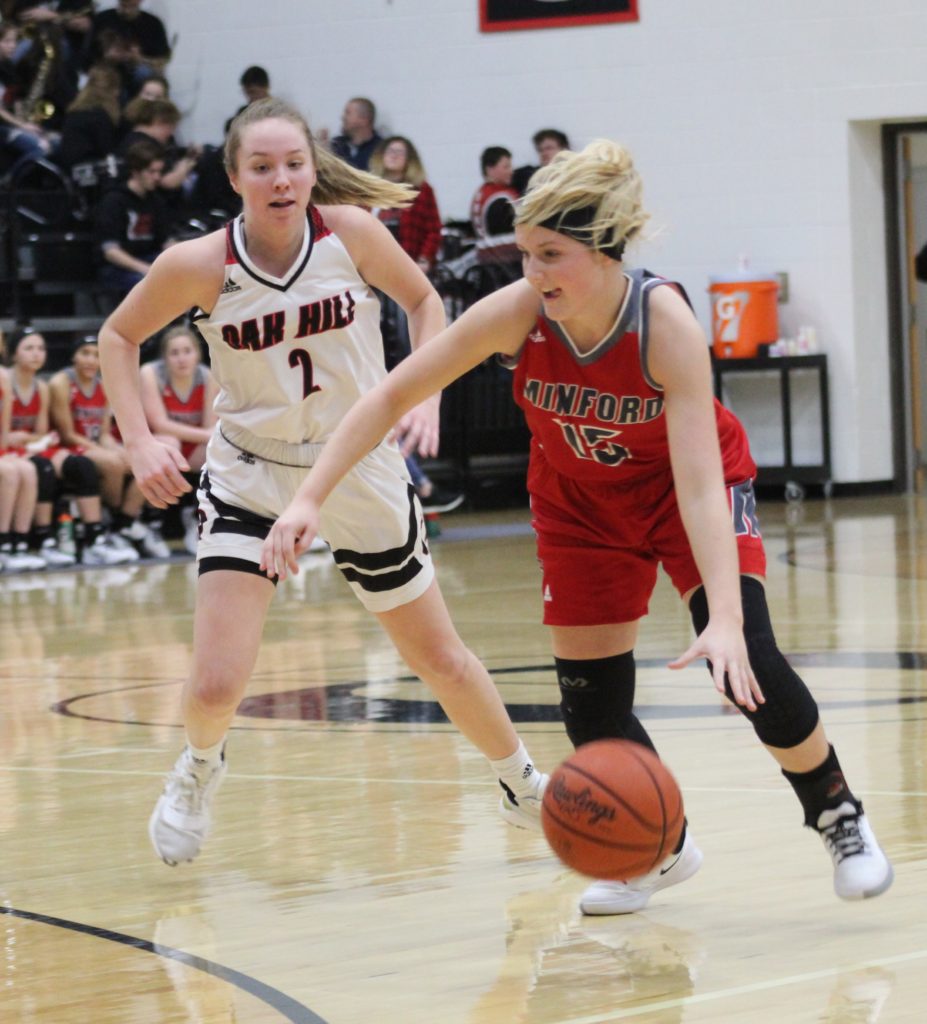 Once again, his Lady Falcons were right there on the cusp of a Southern Ohio Conference Division II victory —trailing most of the way before rallying back in the final quarter, but unfortunately not executing in the clutch and coming up just short.

On Monday night, at Oak Hill High School, the Lady Falcons rallied back from an 11-point deficit to the host Lady Oaks —only to lose to Oak Hill 49-46 thanks to turnovers, missed shots and ultimately missed free throws.

The Lady Falcons forged five-point leads of 5-0 and 7-2 in the opening three minutes and 38 seconds, but trailed — or at best tied — for the game’s final 25-and-a-half minutes.

Minford’s definite downfall was its third quarter, in which it scored just four points —and as a result fell behind by 11 points (41-30) for the final 67 seconds. 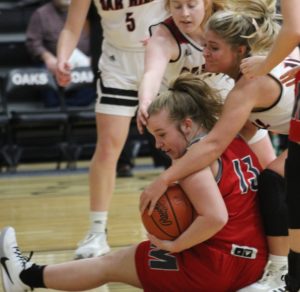 But the Lady Falcons missed five free throws in the fourth and seven for the second half, as one miss would have tied the tilt — while three others would have reduced the deficit to one.

Instead, and speaking of free throws, Oak Hill senior standout Caitlyn Brisker bagged 4-of-6 foul shots in the final minute and nine seconds — with all four coming consecutive to make it a 48-44 Lady Oaks’ lead with just 21 tics to play.

The loss dropped the Lady Falcons to 6-8 and 4-5 in the SOC II, as Davis discussed another frustrating defeat afterwards —similar to what he did after last Monday’s 45-38 home loss against Northwest.

In that affair, Minford made a comeback all the way to a one-point deficit, but — like at Oak Hill — could never gain the lead late.

The Lady Oaks — now 8-6 and 6-4 in the division —completed the season sweep of the Lady Falcons, after winning the first matchup between the two teams in Minford on Dec. 2.

“We had this conversation a week ago. We battled, we’re right there. But we didn’t execute again in the same situations like last week with Northwest,” said Davis. “We missed some shots, we had some turnovers at the wrong times, and missed foul shots that obviously made a difference. If we could have gotten the lead, I think we would have won. The girls give great effort, and I never question that. I mean we are right there. Just have to execute better.”

That included on the final possession, when Brisker made the first free throw but missed the second of a one-and-one situation — and Hannah Tolle grabbed the rebound for the Lady Falcons. 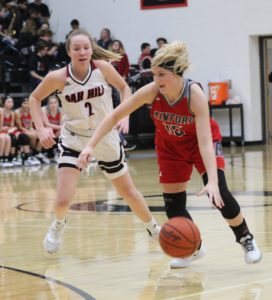 But Minford never got a shot off, as a pass from half-court into the front-court sailed out of bounds as time ran out.

Both clubs also recorded 30 rebounds, as the Lady Falcons committed 15 turnovers compared to 14 for the Lady Oaks.

However, free throws were a major issue for Minford —despite making (18) more than the Lady Oaks even attempted (15).

The Lady Falcons tried 27, while Oak Hill made good on 11 —including 4-of-4 in the first half towards a 29-26 halftime advantage.

Brisker, with her game-high 20 points that included six field goals, bucketed 8-of-10 charity tosses —including 6-of-8 in the second half.

None, of course, were bigger than her four straight fourth-quarter makes which made it 48-44.

With Oak Hill leading 45-43, she split a pair of a two-shot situation, then made both of the one-and-one bonus with 21 seconds left —after the Lady Falcons fouled three consecutive times to put the Lady Oaks at the line.

“We got to the foul line late in the fourth quarter and made our foul shots this time, which we didn’t at Northwest,” said Oak Hill head coach Doug Hale.

Hale, who has over 500 career coaching victories, captured his 500th all-time win almost a year to the day a year ago — by defeating the visiting Lady Falcons on Jan. 17, 2019.

But Monday night’s triumph was important for the Jackson Countians, which bounced back from a 36-30 loss at Northwest on Thursday (Jan. 9) — that basically ended their hopes of chasing down league-leader Wheelersburg in the SOC II championship race.

“A big win for the Lady Oaks tonight,” said Hale. “Against Northwest, I thought our effort and our defensive attitude was good, but we just couldn’t make shots. We battled with a really good Minford team tonight, and we knew coming in that it was going to be a battle. I was proud of them that we had the lead in the fourth quarter, Minford took a big punch at us and we held them off, then we punched back at the end.”

The Lady Falcons had to fire back in the fourth —thanks to their third quarter which produced only four points by Tolle on a basket at the 5:25 mark and two free throws just three minutes and five seconds later.

Minford endured two scoring droughts in the canto of at least two minutes and 35 seconds.

“The third quarter killed us again,” said Davis. “That was the difference.”

But the fourth quarter featured a Lady Falcons’ rally, as Tolle tallied three straight field goals and Livi Shonkwiler scored five points — including a steal and layup and 3-of-5 foul shots to get within 43-42.

Tolle paced the Lady Falcons with 15 points on five field goals and 5-of-8 free throws, as she scored a dozen in the second half.

Slusher swished two first-half three-pointers for Minford’s only triples, while Watters went 4-of-4 at the stripe along with two buckets in the first half.

Makayla Watters was 2-of-4 at the line.

Slusher’s first three gave the Lady Falcons an early 5-0 advantage just two minutes and five seconds in, as her second trifecta got the guests within three (29-26) at halftime.

In between, the Lady Oaks outscored Minford 29-18, as Brisker scored eight first-quarter points —including a long pull-up two-pointer that capped an 11-4 run to give Oak Hill the lead with a minute-and-a-half left.

The Lady Oaks’ role players backed Brisker up, and that included with Peyton Miller out injured with a broken nose.

In the first half, Brooke Howard had an old-fashioned three-point play and three-point goal, Baylee Howell hit two treys, and six-foot center Chloe Chambers combined for 10 points — in the middle two quarters —on four field goals and 2-of-3 free throws.

There were three ties at 9-9, 11-11 and 14-14, as Brisker’s only points in the second stanza — a field goal only a minute and three seconds in —gave the Lady Oaks the lead for good.

“When they guarded Caitlyn (Brisker) the way they did, we handled that and other players stepped up. Brooke Howard did, Baylee Howell hit a couple of threes, Chloe (Chambers) made some shots around the bucket, and Liv (Olivia Clarkson) battled in there and got a few shots,” said Hale.

Oak Hill held leads ranging from two-to-six points in the second quarter, before extending the advantage to 41-30 following the third.

Minford made its comeback in the fourth, but the end result only led to Davis’ discussion afterwards —which was basically a duplicate from last Monday.

“Same conversation. We’re right there. There were some girls crying in the locker-room. They really wanted to win this game and believed we would win this game,” he said. “It’s frustrating, but we’re very close to getting over the hump.”