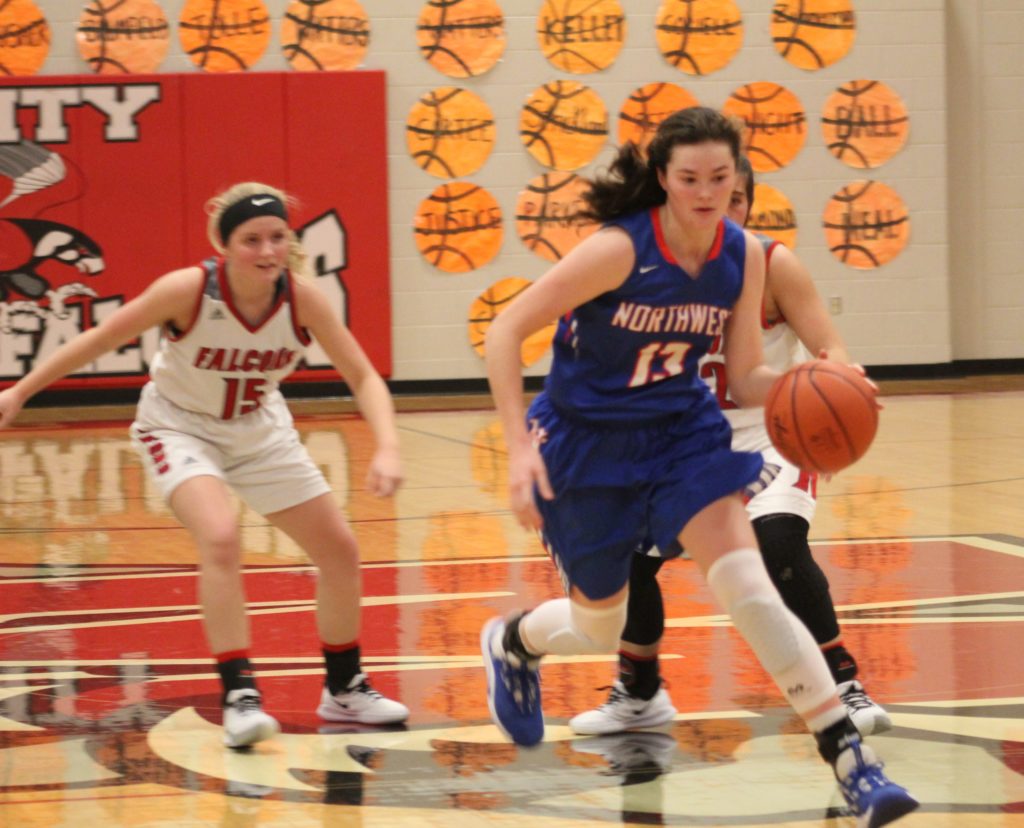 MINFORD — By now, it’s safe to say that the Lady Mohawks know the drill.

First it was at Oak Hill on Black Friday, then it was at Waverly to tip off the New Year, and on Monday night it was at the Falcons’ Nest at Minford High School.

This time, the Lady Mohawks didn’t need a last-second shot (Oak Hill) or even overtime (Waverly) periods —they simply led wire-to-wire while building an 11-point lead twice, and holding off the hard-charging and host Lady Falcons.

Northwest, withstanding Minford’s comeback bid which included slicing the deficit all the way down to a single point with two minutes and 17 seconds remaining, won 45-38 to remain right behind Wheelersburg for the SOC Division II lead.

With Waverly and Minford making up a game on Jan. 25, the other six SOC II clubs completed the first round of league play —as those half-dozen teams have all played eight conference contests.

Minford, meanwhile, entering its affair with Northwest —was part of a four-team logjam with three league losses apiece, seeking to slide up to third-place in the division behind Wheelersburg and the Lady Mohawks.

But, just like Northwest’s wins at Oak Hill and Waverly, Monday’s matchup at Minford was typical of 2020 life in the SOC II.

Rare does a lead get out of single digits, and usually the game goes down to free-throw shooting and/or the final few possessions.

But in following up a 9-1 run over the final minute and 27 seconds to win at Waverly on Thursday, the Lady Mohawks made it six straight points over the final 2:17 to capture Monday’s meeting in Minford.

“This is two games in a row where it’s come down to the wire, but we’ll take a road win in the conference anytime,” said Northwest coach Dave Frantz. “That’s five road wins in the conference for us now, and all of those are huge. This was another typical SOC II game, but our girls stepped up again when they had to step up, and I can’t say enough about them. They work hard and I am proud of them. I thought our effort was great tonight from every kid that stepped on the court.”

Once again, as was the case with the triumph of the Lady Tigers, Northwest left the door open for the Lady Falcons with some missed shots near the basket — combined with living dangerously with some passes that Minford either did or almost intercept.

However, Northwest is winning the tight ones with defense, as the Lady Mohawks shut the Lady Falcons out over the final 2:17.

“We’ve been winning with defense. We still need to finish inside at the basket more and that’s what’s hurting us, but our defensive effort has been good. Minford was shooting the eyes out of it tonight, but our two girls off the bench — Reagan Lewis and Terra Webb — were huge for us on defense,” said Frantz.

Leading 39-38 after four straight Livi Shonkwiler points for the Lady Falcons, the Lady Mohawks had an immediate answer —as Valerie Copas connected on a 15-foot corner baseline shot to make it 41-38 just 20 seconds later.

It was Copas’ final of eight field goals for a game-high 17 points, as two missed Minford shots sandwiched around a turnover resulted in four final free throws for the Lady Mohawks in the final 18 seconds.

Hannah Tolle’s three-pointer to tie it — with under 50 seconds to play — for Minford missed, setting up Northwest sole senior Keirah Potts to be fouled by Shonkwiler with 18 tics remaining.

Potts put in both of the one-and-one bonus situation, then Haidyn Wamsley —with 2.2 seconds left —went 2-of-2 to complete her 5-of-6 night at the foul line.

Only seven Lady Mohawks played, and one only played in one quarter, but Northwest never relinquished the lead —and six girls cracked the scoring column.

Copas, as Frantz said “had a strong shooting game”, canned a three-point goal to make it 7-0, then scored six more baskets for her 17 points.

In addition to her clutch corner-baseline shot in the final minute and 57 seconds, she won a loose-ball battle with a Lady Falcon for her final basket of the opening half.

Not giving up on the play, Copas wrested the ball away from a Minford player and powered-up at the bucket —dropping the shot in with time expiring to make it 29-21.

Ava Jenkins tallied a dozen points on three twos, a second-stanza three off the wing and an old-fashioned three-point play, as Potts posted three first-quarter baskets — while Wamsley made 3-of-4 first-half foul shots.

Northwest led by at least four points from the six-and-a-half minute mark of the opening quarter until the 4:19 mark of the fourth, as that advantage actually ranged from four to 11 points over a span of two full periods.

However, Minford made the Lady Mohawks work for it — and erased a 33-22 deficit with 5:15 remaining in the third by chipping away with a methodical 16-6 run over the next eight minutes and 22 seconds.

Minford coach Shane Davis felt confident about his Lady Falcons’ chances —had they been able to ever take the lead.

“That’s what I told the girls. If we could ever get that lead, I could see the look in the girls’ eyes. I felt like we would win,” said Davis. “We had a bad first quarter, but we battled back and never quit. Our effort is always there, but we had a slow first quarter again, and that has happened to us even in games that we’ve won. We hurt ourselves, absolutely.”

The Lady Falcons outscored Northwest 9-6 in the third frame, thanks to two field goals and split of free throws by Makayla Watters — and one basket apiece from Shonkwiler and Maddie Slusher.

Slusher and Shonkwiler scored again to make it 39-34, as then Shonkwiler simply took the ball from Potts at midcourt —and converted a layup for a three-point deficit (39-36) with 4:19 to play.

For her 10th and final points, which ultimately ended up as Minford’s final markers, Shonkwiler sank two free throws two minutes later —but Northwest never allowed the Lady Falcons to gain the lead.

“I think we had some good looks, but it was one of those nights we missed a lot of shots,” said Davis. “And you just can’t do that against good teams like Northwest.”

Shonkwiler with 10 before fouling out followed Tolle’s 12 first-half points, which included two three-pointers, two two-pointers and 2-of-2 freebies.

Makayla Watters with seven on two field goals and 3-of-4 free throws, Makenzie Watters with a first-half deuce and a trey, and Slusher with her four points rounded out the Lady Falcons’ scoring.

Although, Minford may have benefited greatly — had it made another shot here or had one less turnover there.

“We had a turnover at the wrong time, we missed a shot at the wrong time. They hit a shot at the right time for them. We couldn’t get back on our side tonight for whatever reason,” said Davis. “We battled again, against another good team in our league, but it’s frustrating not being able to pull one of these out. But these girls are still buying in and we always get effort out of them. We’ve been in every game, and eventually we’re going to turn these into wins.”

For Frantz and his Lady Mohawks, their experience at winning close road shows has to count for something.

“It (experience) helps, but the courts are the same and the baskets are the same 10-foot from the floor. No matter where, when or how, we still have to play ball and work on things like finishing at the basket and taking care of the ball,” said Frantz. “These girls do play hard and find ways to battle and win, and so it’s on to the next one.”

And that next one is against Oak Hill, which Northwest will host on Thursday.

Northwest won the first meeting against the Lady Oaks —when Reagan Lewis landed the shot of Northwest’s season with four seconds left to lift the Lady Mohawks to a 46-45 victory.

Oak Hill will enter at 7-5 and 5-3 in the division, as every game is a must-win if Northwest wants to win the SOC II championship.