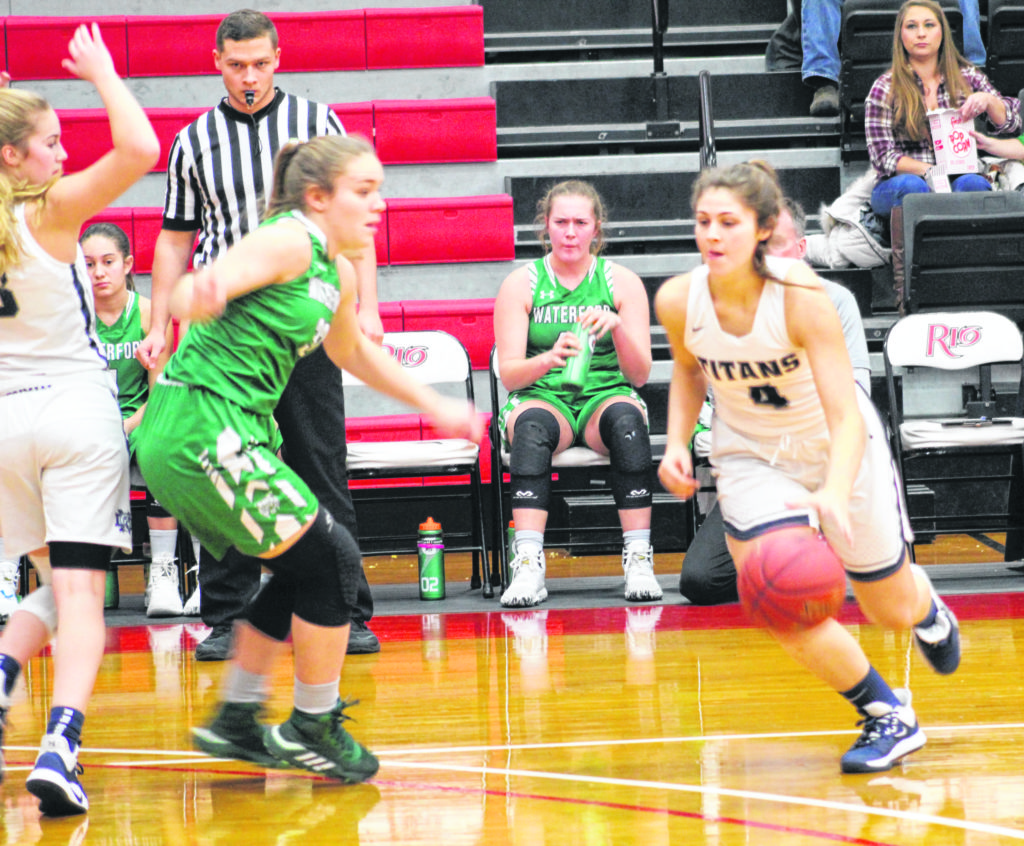 RIO GRANDE —They say that two out of three isn’t bad.

As part of Saturday’s first annual Woods Lumber Girls Basketball Classic at the University of Rio Grande, undefeated Notre Dame dismantled Waterford 54-29, New Boston boasted a bounce-back victory by getting by Greenup County (Ky.) 47-41, and Minford was the victim of a second-half kamikaze by the Eastern Brown Lady Warriors 62-40.

The three Scioto County clubs competed as part of seven total tilts on Saturday — inside the University of Rio Grande’s Newt Oliver Arena.

This was the first season for Woods Lumber to sponsor this two-day girls basketball showcase, as the event is actually a fundraiser and put on by the University of Rio Grande women’s basketball program. 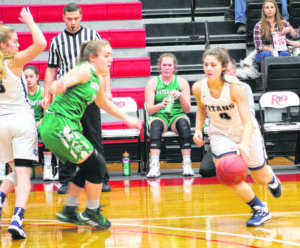 For a defensive-oriented unit, the Notre Dame Lady Titans torched the nets in the first half en route to a 25-point rout of the Waterford Lady Wildcats.

Meanwhile, Notre Dame almost outscored Waterford with the three-pointer alone — netting nine in the first half for 27 points, as that 27 was half of the Lady Titans’ total.

The Lady Titans are now a perfect 9-0, as in addition to their lockdown defense — they shot 9-of-15 from three-point range.

Against non-league Waterford, a recent Division IV powerhouse which actually earned four consecutive trips to the state tournament including the 2016 championship, the Lady Titans had 41 points at halftime — compared to only 18 for the Lady Wildcats.

It was the ideal blend of defense and offense for Notre Dame, explained head coach J.D. McKenzie.

“Everything starts with our defense, and that sparks our offense,” he said. “We like to get out and get running, get points in transition and with rhythm threes. We shot the ball a lot better tonight than we did against New Boston the other night. We were making shots, and it dictated defensively what we wanted to do and put us in a rhythm offensively. We weren’t pleased with our performance against New Boston, but I thought the girls did a good job of getting their minds right, coming up here and making a statement with a big win.”

The Lady Titans never trailed and were only tied 2-2, as Taylor Schmidt split a pair of free throws at the four-and-a-half minute mark of the first quarter —from where Notre Dame dominated and only stretched the lead the remainder of the way.

In the first quarter, and against the Wildcats’ zone defense, Cassidy Schaefer and Isabel Cassidy with one apiece and Ava Hassel with two treys helped push the Lady Titan advantage to 17-6.

In the second stanza, Schmidt, Hassel and Schaefer drilled another three-ball each, before finally a pair from Annie Detwiller in the final 2:23.

Detwiller’s second triple was with 33 seconds remaining to make it 41-18 — which was the Lady Titans’ largest first-half advantage.

Hassel, who actually received a formal full-ride offer from the University of Rio Grande on Saturday, had an old-fashioned three-point play nine seconds into the second quarter as well.

She paced the Lady Titans with 14 points, as Schmidt scored 10 points on four field goals — while Detwiller notched nine.

Schaefer added a pair of fourth-quarter free throws for eight points, as Lauren Campbell with three baskets for six and Claire Detwiller with two buckets for four rounded out the Notre Dame scoring.

Speaking of guarding, Notre Dame defensively allowed just three Waterford baskets in the opening quarter, as the Wildcats went four-and-a-half minutes in one stretch without scoring.

The second quarter was more of the same, as Jenessa Lang landed a pair of threes for the Wildcats for a 27-16 deficit at the 4:25 mark — but Waterford wouldn’t score again until Cara Taylor made a pair of foul shots over three-and-a-half-minutes later.

In the third frame, both teams tallied just four points on two field goals apiece, including Lang for Waterford, who led the now 4-2 Lady Wildcats with eight points.

Notre Dame will return to the road, and return to SOC I action, as it plays at Green on Monday.

The Lady Titans are the defending division champions, and lead the league at 6-0 — while Green is just one game back along with New Boston at 5-1.

It will be the Lady Titans’ fourth game in a week. 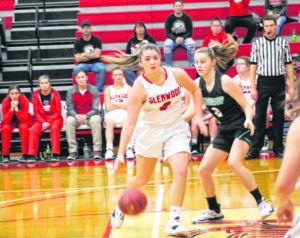 The New Boston Lady Tigers improved to 8-3 — getting a nice bounce-back from Thursday night’s loss at Notre Dame by clipping their Bluegrass State neighbor Greenup County.

The Lady Tigers, who drove their “Lexus” on Saturday as in senior standout Lexus Oiler, raced out to a 25-13 advantage with 2:45 remaining in the opening half.

The Lady Tigers held the lead for the final almost 30 minutes, maintaining a lead ranging from four to 12 points over the final 29.

The lead ranged from four to nine points over the final 11 minutes and 12 seconds, as Oiler amounted all 20 of her points — including a third-quarter three-point goal — through three quarters.

New Boston went to the five-foot nine-inch versatile Oiler early and often on Saturday, as she finished with eight total field goals and 3-of-5 free throws, including six baskets and two freebies for 14 first-half points.

The Lady Tigers and Oiler especially attacked the basket, and her Tiger teammates moved the ball well with the aim of getting her the rock.

“I thought Greenup did a good job of recognizing where she (Oiler) was, but she is just one of those players that is very smart and does a good job of finding the right spot and the right drives and the right shots for us,” said New Boston coach Kayla Wiley. “She is a very good, smart player.”

But Oiler had help both early and late, as fellow senior Taylen Hickman hit two first-half three-pointers towards eight points — and sophomore Kenzie Whitley scored nine of her 11 in the second half, including a three to make it 41-34 with only 5:56 remaining.

“Taylen (Hickman) hit a couple of threes to give us a lift when we weren’t hitting shots in the first half, and Kenzie (Whitley) hit that big three in the fourth quarter when we were struggling to score,” said Wiley.

That started a stretch of five minutes and 23 seconds in which the Lady Tigers held the Musketeers scoreless, as they pushed the lead up to 11 (45-34) — after Sammy Oiler’s steal and layup and Whitley’s mid-range floating jumper in the lane.

The Tigers did miss their first four fourth-quarter free throws, enabling the Musketeers to score seven straight points — including an Emma Frazier three-ball — over two minutes and 10 seconds to slice the deficit to 45-41 with 25 seconds remaining.

However, Sammy Oiler ended the threat — connecting on both of a one-and-one foul-shot situation.

Wiley said the win was a total team effort, which began with New Boston beginning the contest by playing with energy.

The Lady Tigers also excelled at turning the Musketeers over, frequently running through the passing lanes.

“I thought we started the game that way, but I just wish we would keep that energy for four quarters. I know it’s hard right now because I’m playing a six-man, sometimes a seven-man rotation. We called a timeout to do a better job of stunting and getting in those passing lanes and being in the driving lanes and helping each other out. I thought we did a much better job of that in the fourth quarter,” said Wiley.

Lexie Carroll with 11 points and Frazier with 10 points paced Greenup County, which fell to 2-6.

The Lady Tigers, which have already completed the first half of their season, are off for 10 days before playing again — on Thursday, Jan. 2 at SOC I rival Western. 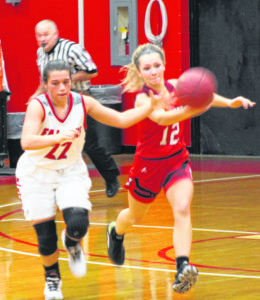 In one word, it all quickly — unfortunately — for the Lady Falcons “unraveled”.

That’s because Minford, facing undefeated Eastern Brown, managed to play right with the Lady Warriors for the opening 20 minutes and 40 seconds — and even led 10-7 following the opening quarter before the Warriors won the second stanza 17-11 to lead 24-21 at halftime.

Still, the Lady Falcons — spearheaded by Maddie Slusher’s pair of three-pointers and driving deuce in the opening two minutes and five seconds of the third quarter — forged three ties, before five consecutive points put Minford ahead at 34-32 at the 3:20 mark.

After that, though, as Minford coach Shane Davis stated, “the wheels fell off.”

Within that 24-point difference, the Lady Warriors went off for 21 unanswered points — only halted briefly when Minford’s Livi Shonkwiler scored with 5:23 remaining, but she injured her ankle and left the game.

It was Shonkwiler’s only points, and Davis didn’t know the severity of her injury immediately afterwards.

The Warrior onslaught spree stretched to 28-2 before Minford’s Makenzie Watters split a pair of free throws with 3:07 left, as Eastern’s largest lead grew to 62-37 — before Falcon freshman Sydney Mougey made a game-ending three-pointer in the final few seconds.

“They went on that big run and our wheels just fell off,” said Davis.

The Lady Falcons’ largest problem, by far, was turnovers against Eastern’s full-court pressure over the final three quarters.

“We played them tough, but they stayed in the press the whole time and we just turned the ball over trying to throw the ball over top of it,” said Davis. “I don’t think they did anything different other than just more bodies to rotate in. We have to get some of these younger girls comfortable handling the ball against pressure, so we can rotate more in and not have the same girls out there as much constantly facing full-court presses.”

Slusher scored 16 points through three quarters to pace the Lady Falcons, as she made three threes — including one from the corner just 17 seconds into the second quarter for Minford’s largest lead at 13-7 — and 3-of-5 free throws.

Ally Coriell scored seven points on three baskets and a foul shot, while the Watters sisters — Makayla (two field goals and 1-of-2 free throws) and Makenzie (one field goal and 3-of-6 free throws) — finished with five apiece.

In addition to Shonkwiler and Moguey’s fourth-quarter field goals, Hannah Tolle tallied a basket in the first.

Camryn Pickerill, whom Minford shut out in the opening half, poured in 15 second-half points with three trifectas and 6-of-13 free throws.

Her back-to-back treys gave Eastern a 40-34 lead and the rout was on.

Rylee Leonard landed 11-of-12 foul shots and four field goals for 19 points, as Eastern attempted 30 free throws while Minford shot too fewer (17) than the Lady Warriors made (19).

The Lady Falcons fell to 3-5 with the loss, as Eastern remains undefeated at 10-0.