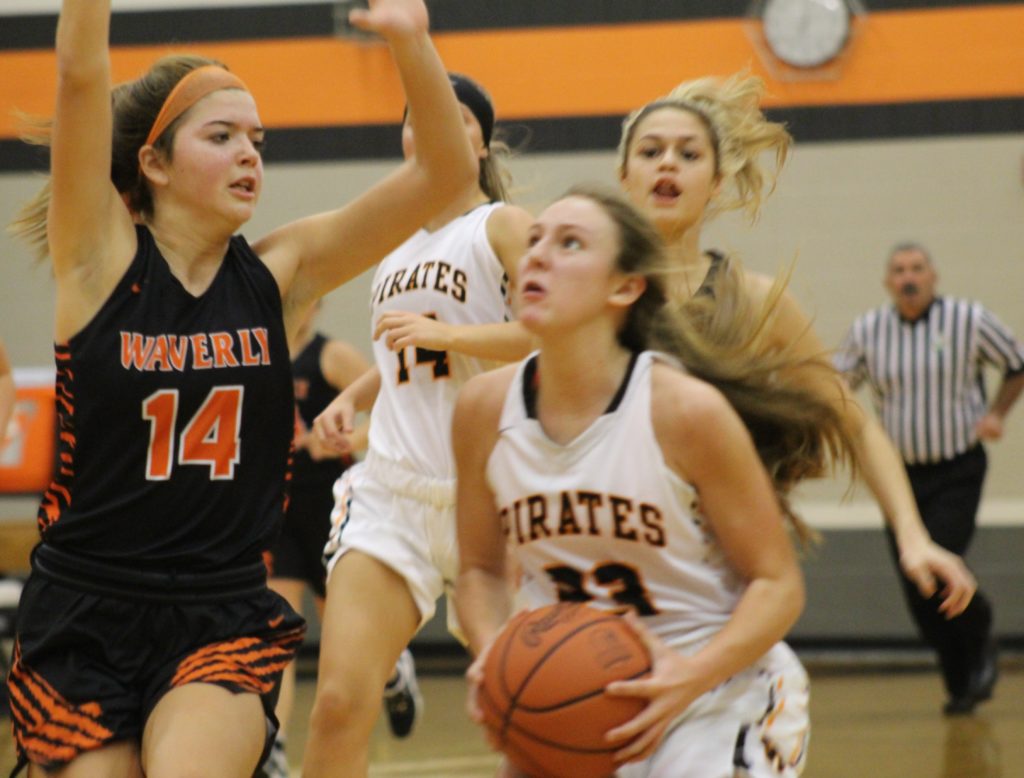 ‘Burg moves to 8-0 with win over Waverly

WHEELERSBURG — Simply put, there was little visiting Waverly could do — and did.

But don’t blame the Lady Tigers here — not when Wheelersburg’s defense was in definite lockdown mode, or as Kaylee Darnell was torching the Lady Tigers’ 2-3 zone.

The host Lady Pirates put the clamps on Waverly, Darnell almost outscored the Lady Tigers by herself, and undefeated Wheelersburg rolled to another Southern Ohio Conference Division II victory on Thursday night by a final count of 56-25.

With the win, the Lady Pirates pushed their perfect record to 8-0 — and to 6-0 and still atop the SOC II.

Wheelersburg, the defending division champion which defeated Minford 44-37 on Monday night for its closest encounter of the season so far, remains one game ahead of the Northwest Lady Mohawks (7-1, 5-1 SOC II) in the conference standings.

Northwest was idle on Thursday with the SOC II’s rotating weekly bye, while Waverly fell to 3-2 — part of 5-2 overall.

For the talented and highly-touted Lady Pirates, most observers thought the senior-less Lady Tigers could possibly pose a challenge — but by halftime in which Waverly scored just two second-period points, those thoughts were long gone.

Thus, the Lady Pirates extended a 13-7 advantage after the opening quarter to 28-9 at halftime — which only increased to 45-16 with 28 seconds showing in the third frame.

While Waverly scored 10 points in the third, it only scored six more in the fourth — as the Lady Pirates played strictly reserve-role players over the final eight minutes.

Wheelersburg’s largest lead stood at 56-23 with only a minute and 40 seconds remaining.

The Lady Pirate defense, once again, didn’t allow an opponent to reach 40 points for the sixth straight affair.

It was also Wheelersburg’s third bout of not allowing an opponent to score at least 28.

“Defensively, honestly, we were very good,” said Wheelersburg coach Dusty Spradlin. “They run a lot of different sets, but I thought our kids did a good job of contesting and getting rebounds.”

While Wheelersburg was after Waverly with a traditional man-to-man defense, the Lady Tigers came out in the 2-3 zone.

After a minute and 45 seconds of passing the basketball around it, Ellie Kallner connected on a baseline jumper — before popping one of her two three-pointers. 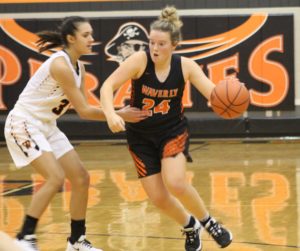 Waverly standout Zoiee Smith, who paced the Lady Tigers with a dozen points including the club’s only three-pointer, scored the next five for the 5-5 tie — but that’s when Darnell started busting the zone, and the Lady Pirates’ pullaway began.

Darnell went off for 23 points for the second time this season — as her first was against Northwest when Wheelersburg scored 44.

On Thursday, she netted nine field goals including five threes, as her back-to-back pair late in the first made it 11-5 with a minute and five seconds to go.

She scored her first deuce with time winding down at the end of the opener, and made it 16-7 with her third three-pointer only 45 seconds into the second stanza.

After Carli Knight notched a field goal for Waverly’s only period points at the 5:58 mark, Wheelersburg reeled off the final dozen points over the final five minutes — with Darnell drilling two more treys to make it 21-9 and 28-9.

For the junior Darnell — who is closing in on the 1,000-point total for her career — she scored at least 15 points for already the fifth time this year, at least 19 markers for the fourth time, and at least 21 for the third game.

She scored three more buckets in the third quarter, and sat out the entire fourth.

Darnell does run the Lady Pirates’ point position, but did attack the zone and found holes in it — and also found spots for set shots.

“There’s an inside to the zone (defense) too, and you have to make sure the ball gets in there some, whether it is off a pass or dribble. And obviously, we shot the ball really well, with Kaylee (Darnell) doing most of it. I think the first possession lasted a long time, but once we settled in, we moved the ball well and got it to an open person,” said Spradlin. “It’s a balance, and we share the ball well with good ball movement.”

But other Lady Pirates got in on the act, as they combined for 11 three-pointers, including one by Alaina Keeney that made it 24-9 — as her third-period three-ball upped it to 33-13.

Keeney and Kallner added eight points apiece, as Kallner — coming back from two first-quarter fouls and not playing in the entire second period — splashed her second trifecta halfway thru the third.

In fact, she was fouled on the shot, but missed the free throw for the extremely rare four-point play.

Makenna Walker with a three for Wheelersburg made it 45-16, as Smith promptly answered for the Lady Tigers.

Annie Coriell, a fellow freshman for the Lady Pirates along with Walker, connected on the final three with 1:40 remaining.

Coriell was one of 10 Lady Pirates, and four freshmen, to dent the scoring column — as Madison Whittaker made her varsity debut and scored three points as well, including the team’s only made free throw on five attempts.

Another freshman, Macee Eaton, added a second-quarter field goal — as did sophomores Lindsey Heimbach and Isabella Hamilton in the fourth and senior Brittani Wolfenbarker for the final points of the third.

Spradlin said the lopsided score allowed his younger Pirates more playing time, and ability to stretch their bench before some more big games coming up.

“When you have not just young kids, but new kids, in key positions, it just takes time. We are just now starting to scratch the surface of what we can be, both offensively and defensively. We have a lot of kids that have talent, it’s just making sure that everybody fits together,” he said. “I think we have come a long way in eight games, and our bench has developed. And our older kids — Kaylee and Ellie (Kallner) — have settled into that leadership role. It’s not about where we are, it’s where we want to be. We still have a lot of things that we can do better.”

Although, on Thursday night, there was little Waverly could do — and did — against the red-hot Lady Pirates.

Wheelersburg was actually playing its eighth game on Thursday — in a span of 18 days due to not playing its first until Dec. 2.

The Lady Pirates play at another one-loss squad for their next tilt — at Ironton on Monday, Dec. 30.

“We started a week late, so we could use a little break before Ironton in 10 days. That’s going to be a tough task,” said Spradlin. “They are big, they are physical and they guard.”