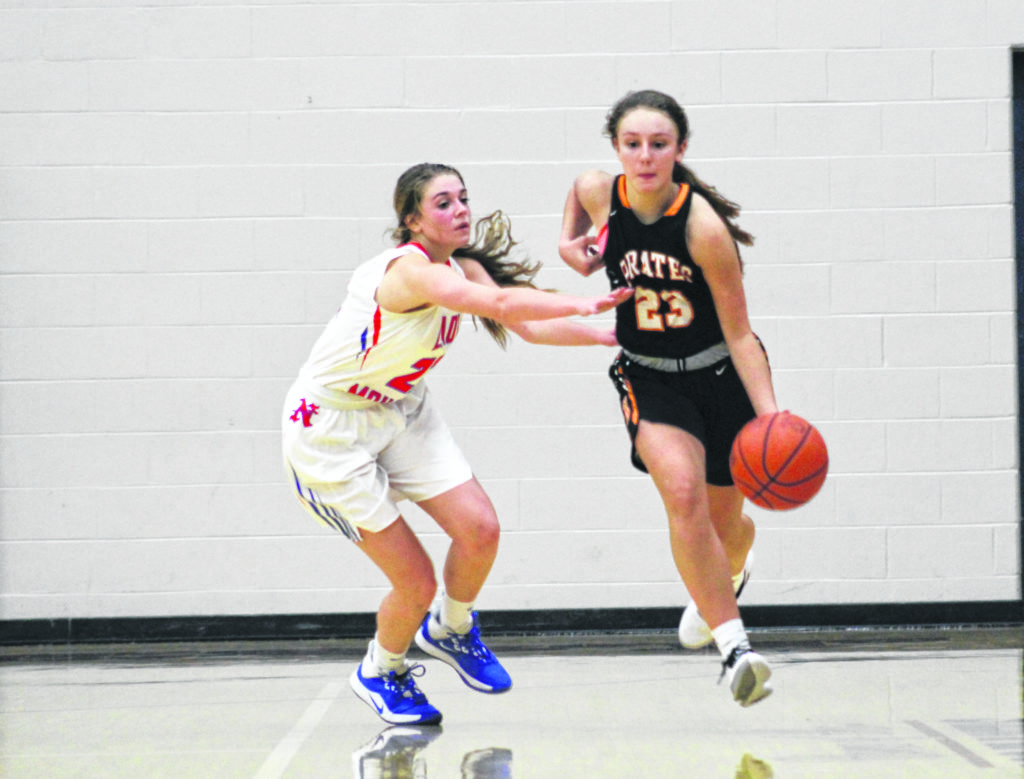 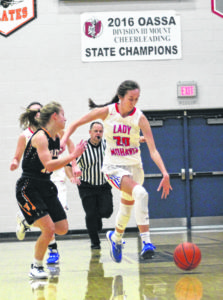 Wheelersburg, which had the opening-night bye in the SOC II’s double round-robin schedule, raised its record to 5-0 — and to 4-0 and atop the league.

The young Lady Mohawks (5-1) suffered their initial loss in six tries, and are now 4-1 in the SOC II.

Wheelersburg won the game, in truth, on the strength of two runs — a seven-point spurt in the final two-and-a-half minutes of the second quarter followed by back-to-back-to-back-to-back three-point goals in the third frame for what was Wheelersburg’s largest advantage.

While it definitely wasn’t always a work of art offensively, the Lady Pirates did the job defensively — forcing 11 first-half turnovers and stymieing the Lady Mohawks to just 14 points on six field goals and two made free throws.

Wheelersburg coach Dusty Spradlin said that Northwest, despite its youth, “presents so many challenges” — but that his Lady Pirates defended the Lady Mohawks well throughout.

“They have athleticism, they have size, they have length, but I thought our kids did a pretty good job against them,” he said. “We told them they can’t fall asleep. They run some of the dribble-drive that we do. We guarded better as the game went on and guarded well in the full-court. We tried to mix up a few things, whether it was man or zone, and just try to bother them and make them work harder.”

After Ellie Kallner made a steal and Darnell finished with a layup and old-fashioned three-point play to make it 12-8, the Mohawks took their last lead on three consecutive baskets halfway through the second quarter — by Ava Jenkins, Reagan Lewis and finally Valerie Copas. 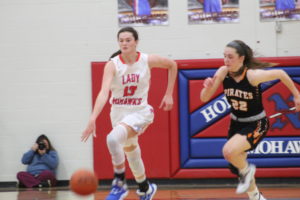 But the Pirates shut out the Mohawks for the final three minutes of the stanza, as Darnell — who scored five of Wheelersburg’s six first-period points including her three that made it 6-5 — put the Orange and Black back in front for the final 18-and-a-half minutes.

In the final 1:20 of the half, freshman Makenna Walker scored back-to-back buckets for the Lady Pirates off two Northwest turnovers, as her second score gave Wheelersburg a 19-14 advantage entering the break.

According to Northwest coach Dave Frantz, the game boiled down to the Lady Pirates making two runs on his Mohawks.

That was the first.

“That’s the most athletic team we’re going to play all year. All five starters and then girls off the bench, they are very quick and well-coached and one of the best teams in the area. But honestly, they had that run at the end of the first half and there in the third quarter. But I can’t say enough about my girls,” said Frantz. “We had a few missed assignments, but all in all we played well and right with them. Just a couple runs that hurt us.”

Spradlin said his Pirates left some points, and some plays, out on the court in the first half.

“At halftime, we talked about we had missed some opportunities. With this group, we have to learn to be a little bit patient. We were trying to drive the lane all the way to the lane every time. On some of those, you stop short and you kick the ball back out. We did that in the third quarter,” he said. “We needed to relax a little bit more, and coincidentally we hit some shots.”

Darnell was Wheelersburg’s spark-plug — going off for a game-high 23 points on four two-point goals, four three-point goals and perfect 3-of-3 at the foul line.

But besides scoring, she handled the basketball here or got a defensive rebound or tie-up there, making all the key plays — whether they show up on the stat sheet or not.

“Kaylee has played a ton of ball at all kinds of different levels. Her instincts are what are so good about her. I thought she made a lot of good decisions tonight. She was in the right spot helping us a lot defensively and especially offensively,” said the coach. “She had to work, but she does a lot of good things. She is a catalyst with the ball. She makes people around her a lot better and we try to play off of her.”

Kierah Potts, the lone Lady Mohawk senior, posted a three-point play just 27 seconds into the second half — but Northwest never got closer.

Instead, over the next four minutes until the 3:20 mark, the Lady Pirates popped four three-point goals to make it 31-17 — as back-to-back bombs by Darnell, one by Kallner and another by Walker made it seem like a tidal wave hit.

Kallner converted a pair of free throws for the final Pirate points of the period, as Darnell scored two fourth-frame field goals — along with a pair of foul shots.

Wheelersburg went 5-of-6 from the line in the last quarter, part of 10-of-15 for the entire game.

Alaina Keeney and Macee Eaton added two freebies apiece along with a field goal, as Lani Irwin split a pair in the opening period.

“Offensively, we’re just trying to get better. We still don’t know when to attack, we miss some opportunities, we force some opportunities at times. In the first half tonight, we dribbled so much, and it wasn’t really with a lot of purpose, it was just to dribble. We cut down on some of that,” said Spradlin. “We’re still learning, and those are things that just take time and we have to be patient with them. We get stagnant a lot, but hopefully we will start taking some of those moments out of the game.”

Copas connected on Northwest’s only three-pointer at the two-minute mark of the third to make it 31-22, as its deficit was never larger than a dozen over the final 11 minutes — but never within fewer than five (38-33) points either.

Copas, who paced the Lady Mohawks with 13 points on five field goals and two free throws, converted to make it 38-33 with 1:50 remaining.

While not happy about the loss, Frantz praised his team’s effort against the highly-touted Lady Pirates.

Spradlin, conversely, knows everybody is on the hunt for his Lady Pirates, who on Thursday night and spearheaded by Darnell delivered a birthday gift to Jolly.

That being another big road win in the SOC II — just three days after Wheelersburg won a critical conference clash at Oak Hill.

“Winning on the road in this league is so important. It was important at Oak Hill on Monday night for us, and now was even more important tonight,” said Spradlin. “I think our league is really good this year. If you don’t bring your best game each night in this league, you could walk away with a loss. But I think that’s a good thing. It prepares you well.”