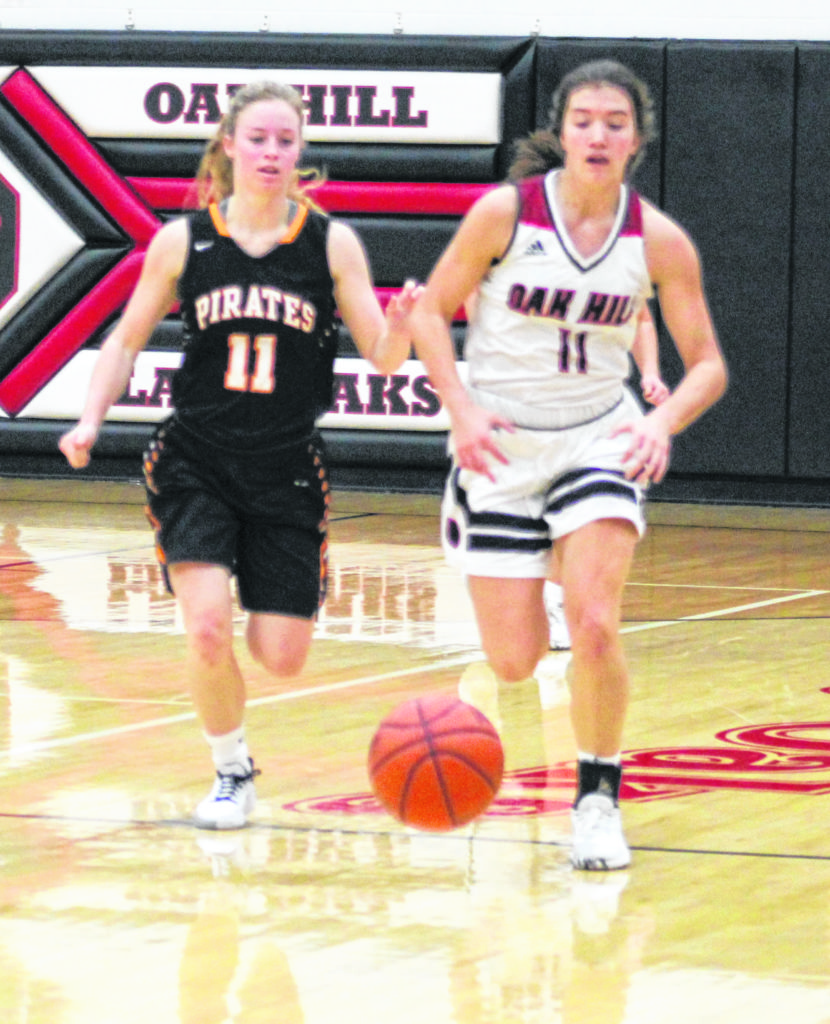 OAK HILL — Had this been a game of pool, the Lady Pirates put the three-ball in from the corner pocket.

That’s because of visiting Wheelersburg’s eight three-point goals, the Lady Pirates rained in a half-dozen from the court’s corners — and also locked down defensively on the Oak Hill Lady Oaks en route to a key 49-34 Southern Ohio Conference Division II girls basketball victory on Monday night.

Indeed, while Wheelersburg made shots — especially from beyond the three-point arc — the Lady Oaks’ offense only reached double figures for the first quarter, as the Lady Pirates played supreme defense to in turn set up their offense.

But the biggest takeaway, naturally, was Wheelersburg — the defending division champion — winning at Oak Hill, the site of its only league loss last season by a 39-38 final.

Thus, the Lady Pirates exact a measure of revenge — but more importantly remain undefeated on this season so far at 4-0, and 3-0 in the SOC II.

Monday’s win also sets up a colossal early-season encounter of unbeatens on Thursday night, as Wheelersburg will invade Northwest to take on the also-undefeated Lady Mohawks (4-0, 3-0 SOC II).

That was, assuming, that Northwest played — and won — at West on Tuesday, as that Monday matchup was actually postponed a day.

Northwest won at Oak Hill 46-45 in the SOC II opener on Nov. 29 — that being a makeup contest itself in which the Lady Mohawks’ Reagan Lewis landed the game-winning basket with four seconds remaining.

The Lady Oaks, already, are now 2-3 — but perhaps more surprisingly are 2-2 in the league with both defeats coming at home.

Not surprisingly, though, that if Oak Hill and longtime and highly-successful head coach Doug Hale were to lose to anybody on the home court — it would be to the high-quality club Lady Pirates.

“We’re playing against a man (Hale) who has over 500 all-time, almost 600, wins. So he knows what he is doing and he is going to make your team really work for a win. And I don’t know how many times we’ve won here at Oak Hill,” said Wheelersburg coach Dusty Spradlin, in his 18th season leading the Lady Pirates. “Any time you get a road victory in this league, I feel like you’re accomplishing a lot. I’m really proud of everybody’s effort and we were good enough to get a win here tonight.”

In last season’s December meeting at Oak Hill, the score stood tied at 32-32 — before the Lady Oaks went off for seven straight with over four minutes remaining.

Former Wheelersburg standout Abbie Kallner canned back-to-back threes to make it 39-38 with 2:37 remaining, but the Lady Pirates — despite having the ball for the remaining two-and-a-half minutes — couldn’t score.

What a difference a year makes on the exact same floor.

On Monday, after three fourth-quarter threes by the Lady Pirates put them ahead 49-28 with 4:44 to play, the Lady Oaks amounted a pair of baskets by Olivia Clarkson — sandwiched around one by Caitlyn Brisker over the next two-and-a-half minutes.

The Lady Pirates built their lead behind their defense, but also the three-point shot — as Ellie Kallner’s corner triple made it 42-28, before back-to-back corner trifectas by Alaina Keeney and Kallner again gave them their largest advanatage.

Through the first three quarters was more of the same, as Keeney connected on her first to make it 10-6 — before second-stanza threes by Lani Irwin (19-13) and Makenna Walker (27-15) and third-frame treys by Keeney (30-22) and Kallner (33-26) kept the Lady Pirates ahead at a workable distance.

Only Irwin’s off the wing with four-and-a-half minutes remaining in the second period and Keeney’s from the top of the key with 6:22 to play in the third were not from the corner.

Spradlin said his Lady Pirates passed the ball well, executed the offensive sets, and found the open shooters who hit from the side pockets.

“We’ve been preaching sharing the ball and we have kids who can play off the dribble. When you make shots, things look a whole lot better obviously,” he said. “I thought our kids did a good job of finding the open man, and it’s that fine line of balance when you pull on that three and when you don’t.”

Kallner and Keeney made three threes apiece, as Kallner added a first-half field goal and 3-of-3 free throws for 14 points.

Keeney also split a pair of first-quarter free throws to give the Lady Pirates the 7-6 lead — breaking the ties of 2-2, 4-4 and 6-6 and putting the Orange and Black in front for good.

Kaylee Darnell, the defensive stalwart who scored the Lady Pirates’ first six points and gave Wheelersburg the lead at 6-4, paced the guests with 15 points on three first-half field goals and 7-of-10 free throws.

“Our older kids, Ellie (Kallner), Kaylee (Darnell) and Alaina (Keeney) and even Lauren (Jolly) and Lani (Irwin), because they’ve been in our system, I can throw something at them and they do a good job of adjusting,” said Spradlin. “Those are kids that we trust.”

In the Lady Pirates you can trust their team defense, which made seven steals and forced a dozen first-half turnovers by the Lady Oaks.

“Turnovers have been our nemisis all year,” said Hale. “We made too many mistakes to beat a team the caliber of Wheelersburg.”

But even more glaring was the job Wheelersburg did on Oak Hill standout senior scorer Caitlyn Brisker, who only had a field goal in each quarter for eight points — one of which was a rebound putback in the second.

“When you can go out and throw three or four or even five different girls and stay in front of Cait Brisker, you’ve done a heck of a job defensively,” said Hale. “At times, I thought we adjusted to that with other ball-handlers and other strategies on offense, but we couldn’t stay consistent.”

Brisker, already a 1,000-point scorer for her decorated Lady Oak career and who went off for 30 against Northwest, was of course the Lady Pirates’ primary defensive focus.

In addition, Oak Hill did not hit a single three-pointer.

“Holding her (Brisker) to eight was absolutely huge. I don’t know how many nights you’re going to be able to do that. We forced some turnovers, but we have to know where Brisker is at all the time. She is such a phenomenal athlete and it’s just hard for people to match her athleticism,” said Spradlin.

Oak Hill trailed 12-11 following the opening quarter, but its point total kept dwindling with each passing canto — until it endured an epic scoring drought from the 2:07 mark of the third until the 3:45 juncture of the fourth.

Wheelersburg reeled off 14 unanswered over that same stretch to make it 37-28 after three quarters — and finally 49-28 before the Lady Oaks scored the final six points.

“We had cut the lead to four (30-26) in the third quarter, then they hit a two and get a turnover and a three, and within two possessions they are up nine,” said Hale. “We’re not as deep as they are, they got our legs tired and made threes in the fourth quarter. We were helping on the drives, stopping their penetration, and just didn’t recover in time (to defend three-point shooters).”

The Lady Pirates’ primary first-half run was a 15-4 spurt over the final 45 seconds of the first period and the opening 5:50 of the second.

After Darnell intercepted a pass and scored on a layup just 18 seconds into the second quarter, Oak Hill was never within a field goal again.

The Lady Oaks will face another undefeated on Thursday at Waverly, while Wheelersburg will return to the road for the major division affair at Northwest.

“We’re still learning each other and playing together, but we have kids that want to make plays for us,” said Spradlin. “We just have to take better care of the ball and rebound better, and those are two things we have to do well with Northwest’s length and height which we will face on Thursday.”