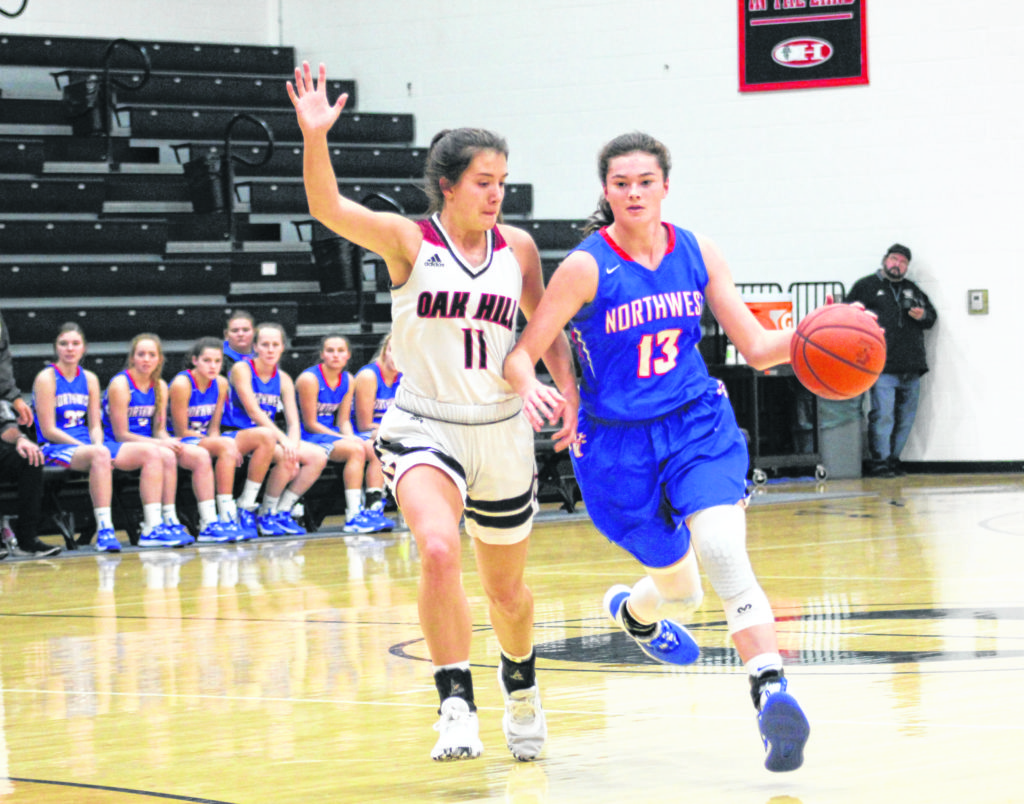 Well, it does again — and Lewis was responsible for the final number on the Northwest, or guest, side.

That’s correct — maybe an early-season surprise in what will likely be a hotly-contested SOC II.

While it was the league opener for both clubs, it was the Lady Oaks’ opener altogether — and only Northwest’s second bout.

It was also the Lady Mohawks’ second win at Oak Hill in three years, but that one two years ago was a much greater upset than it was on Friday.

As for that scoreboard situation you ask?

Northwest, which won its opener a week ago against Clay, needed two trips to Oak Hill in a matter of five days — because Monday’s matchup between the two squads was postponed when the scoreboard failed to work.

In rescheduling the contest for Friday, Black Friday for a 1 p.m. tip to be exact, it appeared maybe it was too much for the youthful Lady Mohawks — which although experienced were going up against the Lady Oaks, which are considered a consensus favorite to capture the SOC II championship along with Wheelersburg.

However, in a basketball game resembling more of a rock fight, Northwest never batted an eye — and held the lead for the majority of the day, including as much as a 10-point (25-15) advantage with a minute remaining in the opening half.

The Mohawks then made a bad pass on their next possession, which was intercepted by the Lady Oaks’ Olivia Clarkson, who with 49 seconds remaining made the second of two double-bonus free throws — giving the Lady Oaks a 45-42 advantage and after Oak Hill had run almost 45 seconds off the clock in forcing the Lady Mohawks to foul.

But Northwest, after Haidyn Wamsley hit another jumper with 33 seconds left, then got Clarkson to commit to a key turnover — a travel call with 21 seconds showing.

The Lady Mohawks moved the ball into the half-court with 14 seconds remaining, as head coach Dave Frantz then called a timeout to set up a final play.

Lewis got the ball on the left wing, dribbled off a ball screen set by Wamsley as Brisker was defending, and launched a shot from just near the free-throw elbow with four seconds left.

She shot it with confidence and swished it straight through, marking the eighth lead change — but more importantly putting that final number up on the Northwest side of the scoreboard.

Lewis enjoyed a stellar sophomore setter season in volleyball, and Frantz felt she was more than capable of handling a pressure-packed situation at the end of the game.

“I want to be able to have a team, and I thought we did today, where you can’t just deny one person. You can’t just focus on one person. Haidyn (Wamsley) had the hot hand, and of course, they (Lady Oaks) weren’t going to let her take that last shot. But Reagan Lewis is our second person off the bench, and for her to come in with a pressure situation and knock that shot down, I attribute a lot of that to handling pressure situations in volleyball. It just carries over into basketball when you can handle pressure like that,” said the coach. “I’m very proud of her.”

The Lady Oaks, after calling a timeout with one-and-a-half seconds left, actually attempted a very good shot — when Brooke Howard made a great catch of a three-quarters court pass just outside the three-point line.

But Howard hit the rim with the good look, and the Mohawks hung on for a massive early-season SOC II triumph.

“It’s a good team win today against one of the elite teams in the league and the area. These girls are very good kids, but very gutsy kids,” said Frantz. “They play hard, they play their rear ends off, and I just can’t say enough about them. They feed off of each other.”

Speaking of feeding, Frantz joked that he told his Lady Mohawks “not to eat too much turkey” on Thanksgiving Day.

Indeed, Northwest faced on Friday some odd circumstances — with the Lady Mohawks playing an afternoon tilt on a busy Black Friday and making the long morning bus ride to Oak Hill.

“These kids stepped up to all of that,” said Frantz. “The other night when we came up here, I learned something about these girls. There is such a thing as a game face and then there is playing loose. They had good composure before the game, very loose. They knew what they had in front of them, but we also knew that it’s just basketball, so let’s have fun and not make it bigger than it is.”

Although, you can’t ignore the fact that it was a major Mohawk victory — especially when Brisker, the two-time Division III second-team all-Ohioan, blew up for a game-high 30 points.

“Today’s game is what the SOC II is all about. Every game is a challenge,” said Oak Hill head coach Doug Hale. “Caitlyn Brisker was outstanding for us, but we were sluggish in a lot of areas and Northwest never gave up when we rallied to take the lead in the third quarter. They made a lot of shots, forced some mistakes by us, and when you don’t play your best game, you find yourself on the short end.”

While Lewis’ shot will be remembered most, Wamsley was the go-to scorer.

She led the Lady Mohawks with 16 points, which included nine points in the opening half — and seven in the fourth quarter.

Before her clutch shot which trimmed the deficit to 45-44, she put the Lady Mohawks back in front just 18 seconds into the final canto — after Oak Hill had outscored Northwest 13-5 in the third, completely erasing its 25-15 advantage which it held only nine minutes earlier.

Wamsley, who drilled both of Northwest’s two threes, opened the fourth with her second trifecta for a 33-31 edge — the sixth lead change of the game.

She then made two free throws for a 37-34 Mohawk lead, as Ava Jenkins’ jumper from the top of the key gave the Lady Mohawks their final advantage of at least five points (39-34).

Lewis and Jenkins both had two field goals for four points, as Kloe Montgomery (five points) and Keirah Potts (six points) posted a pair of field goals as well.

Audrey Knittel split a pair of third-quarter free throws with 24 seconds remaining, as Northwest needed every single solitary point — thanks to Brisker blowing up for her 30, including three fourth-quarter field goals and her 6-of-7 foul shots.

“A lot of Brisker’s points were over on good defense. She is just a phenomenal player,” said Frantz. “She showed that today. We would have her D’d up, but she moves so well with or without the ball.”

Brisker’s 10-point personal barrage in the fourth included nine in a matter of five minutes, as the Lady Oaks’ 11-3 run from down 39-34 to up 45-42 spanned exactly three minutes and 41 seconds.

Brisker also scored 10 in the second quarter, which included both of the team’s two threes, but it wasn’t until the third frame when Oak Hill finally revved up — going on a 10-1 run to take a 28-26 lead with 4:10 to play.

“We got into a little bit of a panic mode, and even though we have some experience, we have still youth out there,” said Frantz.

However, her final point was a foul shot with only 5:03 remaining.

Peyton Miller made 3-of-4 second-half free throws for the Lady Oaks, as both teams missed six foul shots apiece (Northwest was 12-of-18 and Oak Hill was 13-of-19).

“That’s something we’ve lacked the last couple of years,” said Frantz. “Wamsley had a couple of threes and Valerie (Copas) and some other girls all hit mid-range shots today.”

Of course, no shot was bigger than that by Lewis — as Northwest walked out of Oak Hill’s gymnasium with not only a win, but respect.

“Respect is something we have to earn, because no one gives it to you. That’s what we’re playing for. We’re not there yet, but I think we earned some today by defeating a very good well-coached team on the road,” said Frantz.

Northwest will return to the road, and return to SOC II action, on Monday at Eastern.