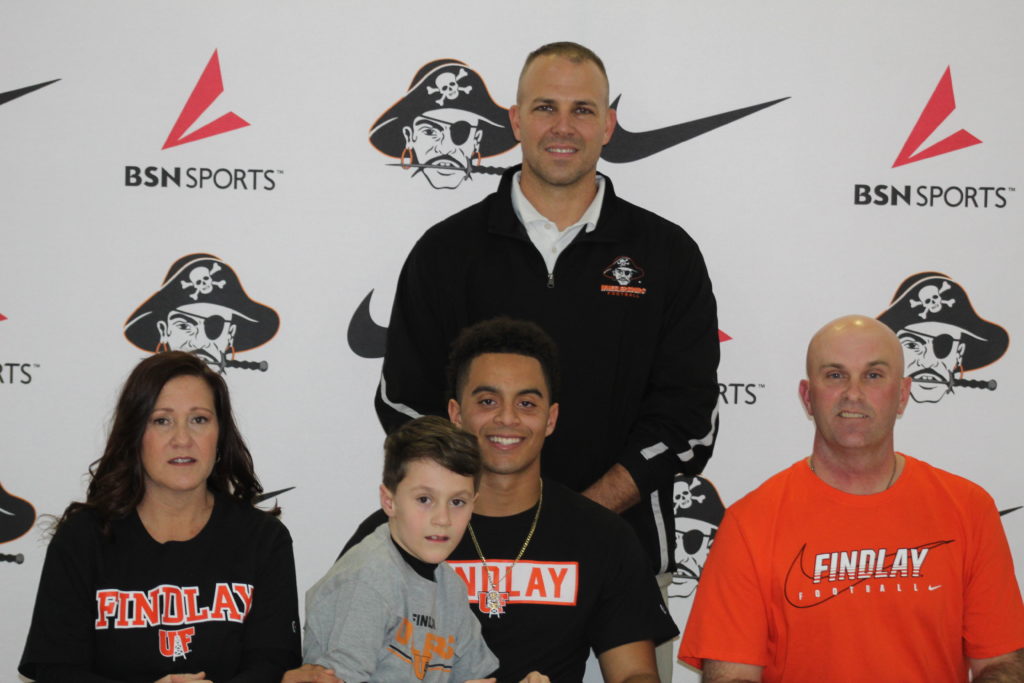 WHEELERSBURG — For Makya Matthews, his wardrobe won’t change too much.

That’s because Matthews, the Wheelersburg High School all-purpose standout, will remain in Orange and Black, but made it official on Wednesday with his announcement to play college football for the University of Findlay.

Matthews, a soft-spoken senior whose outstanding performances on the football field did his talking, was flanked at his signing ceremony by his mother Sara Fry; several other family members; Wheelersburg High School head football coach Rob Woodward and almost the entire Pirate team — of which he was the most recognized from the 2019 campaign.

Matthews was one of 32 recruits from Ohio which signed to play for Findlay, according to a university press release on Wednesday — in conjunction with the annual National Signing Day all across the country.

Matthews — who played and can play almost any and all of the skilled positions — moves on to play for the Oilers, an NCAA Division II school located in Findlay and a member of the Great Midwest Athletic Conference.

The Oilers are coached by Jason Keys, who is entering his 10th season leading the program.

For Matthews, in the Wheelersburg High School foyer full of enthusiastic supporters, he simply yet politely replied “yes sir” when asked about his excitement of playing college football.

He said Findlay was his first official visit, and he “just loved the coaching staff and talked to a few players and they liked it a lot too”.

“It was pretty much Findlay all the way for me,” said Matthews. “Their offense is very similar to ours. It’s an RPO (run-pass option) style. I’ll play the slot and hopefully contribute.”

Matthews said he was being recruited to Findlay for the wide receiver position, primarily the slot spot, although on his biographical information in the press release it lists him as a five-foot nine-inch, 172-pound running back.

But no worries, Pirate and Findlay fans, for Matthews is indeed your truly defined all-purpose player.

In fact, he was a three-time all-Southeast District Division V first-team honoree —at three different positions.

As a sophomore, as part of the Pirates’ 2017 Division V state championship squad, he made all-district as a defensive back —but landed on the list on the offensive side for his final two seasons, as an all-purpose pick as a junior and as a running back as a senior.

While making first-team all-district automatically earned him Special Mention all-Ohio accolades, he was a first-team all-state selection in 2018 and again in 2019.

Following up the undefeated 15-0 state championship year, the Pirates went 13-1 and reached the state semifinals again —before rallying from a 2-3 start last year by sweeping through the Southern Ohio Conference Division II again and advancing to the regional semifinals.

Matthews had a large hand in the success of all three seasons.

“Makya has been a special player in our varsity program, but even before that at the younger levels, he was always a hard worker with the group that he has come through with. People have recognized his talent,” said Woodward. “As he came in as a freshman, I remember recognizing he had a special ability and his hand-eye coordination with the ball was something that was extremely explosive. And the group of guys he had around him, they all just had a hunger and a drive to work towards excellence. Makya was really a catalyst for all of that. While he doesn’t say a lot, his hard work on and off the field is infectious to everyone he is around.”

For those into career statistics, Matthews’ are astonishing in all three phases.

Defensively, in actually twice being named the SOC Division II Defensive Player of the Year (2018 and 2019), he made 147 tackles and 12 pass deflections with 10 interceptions —two of which he returned for touchdowns.

He also forced five fumbles and made one recovery, as Woodward went on to say that “he made plays on balls his sophomore year that we hadn’t seen from a free safety in a number of years.”

Matthews made headway with his offensive production that same season — to the point where he became a major impact player.

So much so that he had the game-tying touchdown in the state championship game against Pemberville Eastwood.

He caught 105 passes for 1,791 yards and 20 touchdowns, and averaged exactly 17 yards per reception, while also carrying the football 213 times for 1,436 yards — and scoring 21 rushing touchdowns while averaging 6.7 yards per carry.

He also developed a knack for special special teams returns, amassing 611 yards on 24 kickoffs for an average of 25-and-a-half yards, while taking back three punts to the house —part of 55 returns for 804 yards and 14.7 yards per return.

Including his interception returns, and his four pass completions for 96 yards and one TD, Matthews was responsible for 47 touchdowns in his decorated Wheelersburg career.

He finished with 4,738 all-purpose yards, which —with his interception return yardage —is only 52 yards shy of 5,000.

“I liked playing wide receiver, but that and running back are really close,” said Matthews. “It’s a different feeling running with the ball down the field, but I also like catching it.”

In the storied tradition of Wheelersburg football, he is only the third Pirate in school history to be a two-time first-team all-Ohioan — and only the fifth player to be named a two-time winner of the Andy Hopkins Most Valuable Player Award.

“Makya took on greater roles on offense over his last two years while continuing to play and excel on defense. Then he came on even more in special teams with the skill sets that he has,” said Woodward. “He is just an outstanding young man, both on the field and in the classroom. He works extremely hard and is gifted with intelligence and work ethic. It’s really going to carry him on through his college career.”

Matthews said his four years as a Pirate prepared him well to be an Oiler.

“Being here at Wheelersburg was honestly great preparation for college,” he said. “Just the work we put in and the style that we do everything. It proves that success comes with all that hard work.”

But Matthews is also quite talented, and intelligent, too.

He said he plans to major in pharmacy, while wide receiver and/or running back he can play both, Woodward expects him to make a serious special teams impact.

“I think Findlay will find he is really gifted and will help give them depth as a return specialist. Both kickoffs and punts. Receiver or running back, he is great about catching the ball behind the line of scrimmage, which a lot of times is just an outside run for teams in today’s offenses,” said the coach. “We are very excited about him going on to the next level and we think Findlay has picked up a great player in Makya, both for football and academically.”

One thing is for sure for Matthews at Findlay — he won’t have to trade in any Orange and Black.