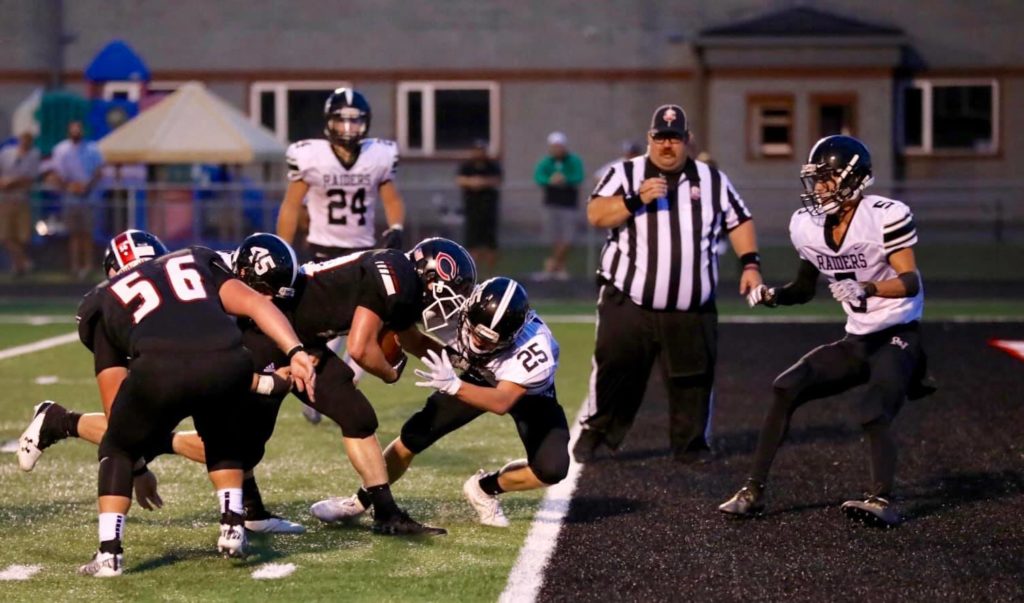 COAL GROVE – Indeed, it was a highly-successful homecoming for Coal Grove’s Jay Lucas.

Making his head coaching debut at his alma mater, Lucas’ host Hornets held the visiting River Valley Raiders without an offensive touchdown, amassed over 400 yards of offense themselves, and scored the game’s final 25 points en route to a 32-7 season-opening victory on Friday night inside LeMaster Stadium in Coal Grove.

The meeting against the Raiders, a former member of the Ohio Valley Conference with Coal Grove, was the Hornets’ 15th all-time – as Coal Grove now owns a decisive 13-2 series advantage.

Before Friday’s game, Lucas’ father – longtime and legendary Coal Grove coach Dave Lucas – was honored with a sign renaming the street which runs in front of the high school as Dave Lucas Lane. 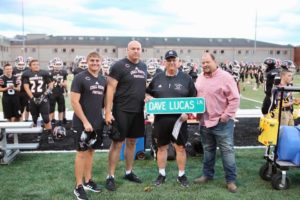 Jay was his longtime assistant, but now the roles are reversed with Dave assisting his son.

The father-and-son tandem spent the past two seasons at Wellston after originally coaching the Golden Rockets from 2000 thru 2002, with Jay getting hired there in 2017 for his first career head coaching job.

But, the younger Lucas was glad to once again occupy the Lemaster Stadium sidelines, with the elder Lucas calling his shots from the press box.

Jay, Dave and Jay’s son and assistant coach Jordan Lucas were recognized beforehand as three generations of the Lucas’ coaching at Coal Grove.

Jay said he was relieved once the game started, and praised his Hornets for how hard they played and how well they performed. 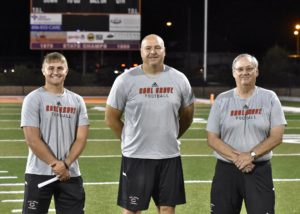 “I thought our kids played really hard. I would be lying if I said it wasn’t an emotional time for me, because it was the first one (game),” he said. “Coal Grove has always been home. I’ve been around here all my life. We had to make some adjustments when we did and I thought they executed well on both sides of the ball, and I was really proud of them. They (Raiders) are vastly improved from last year, but I was pleased with how we kept our focus for the entire game, especially throughout the delay.”

The Hornets scored the final 25 points in the final 37 minutes and 34 seconds, and withstood a 55-minute weather delay in the second quarter by dominating both sides of the ball following it.

The Lucas’ — long known for their ground-oriented trap-heavy ball-control and clock-consuming running philosophy — also aired it out on Friday for 16 attempts with nine completions. 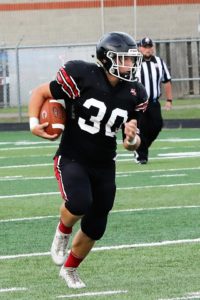 Austin Stapleton struck for 115 yards rushing and two touchdowns on 19 carries, and Austin Stormes – on 10 totes and 53 yards with five receptions for 74 yards – scored on an 8-yard run with a minute-and-a-half left in the first quarter to give the Hornets the lead for good. 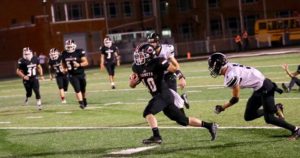 “Those two backs, we feel good about those guys. They can really do some damage from the backfield spot,” said Lucas.

Cory Borders, making his first start at quarterback for the graduated Nate Harmon, completed 8-of-14 passes for 117 yards.

His 6-yard completion to Jarren Hicks with five minutes remaining in the third quarter capped the scoring at 32-7.

Coal Grove outgained the Raiders by almost 300 yards (405-117), and stymied the injury-riddled Raiders to 33 rushing yards on 20 attempts.

The Hornets held a hefty 25-5 advantage in first downs, and forced the Raiders into four punts with three turnovers.

The second of two lost first-quarter fumbles, with 6:42 to play, produced the Hornets’ first touchdown.

Lucas spoke to the physicality of which the Hornets hit the Raiders.

“We feel like we have a good group on the defensive side of the ball,” he said. “The play that Justin made there set the tone and gave us momentum. We have some good skilled players, but Coal Grove has always been pretty physical. We were going to challenge them up front and see where they ended up.”

Where several Raiders ended up, unfortunately, was out of the game and on the sidelines.

River Valley, under second-year head coach Jason Peck and coming off a 1-9 season, was already a key man down with senior fullback and linebacker Colton Gilmore likely out for the year with an injury.

The Silver and Black turned even more black and blue with three other injuries in the contest – senior lineman Cole Thaxton, senior running back and strong safety Cole Young, and sophomore lineman Landon Dodrill.

The Raiders’ only score occurred just 15 seconds after Coal Grove struck first – when Young returned the ensuing kickoff 85 yards untouched up the middle.

But the Hornets hit back with a 55-yard, 10-play scoring drive that spanned five minutes and 53 seconds.

Coal Grove mixed runs with Stapleton and Stormes, as Stormes scored from eight yards away with 1:34 left in the first quarter.

J.C. Damron made his second of two successful extra point kicks to make it 14-7, giving the Hornets the lead for good.

After an exchange of punts, the Raiders returned a punt 31 yards to the Coal Grove 17, but River Valley turned the ball over on downs inside the red zone.

The weather delay hit at the 4:17 mark with a torrential downpour, and when the contest resumed, the Hornets were ready while the Raiders were not.

Coal Grove drove 87 yards in only five plays on the first possession following the break, as Stapleton scored from 13 yards away with 2:52 left in the first half.

Stormes scampered for a dozen yards, a River Valley face-mask penalty pushed the ball to midfield, and Borders broke free for a 38-yard gainer on the previous three plays.

Lucas said it was important for the Hornets to make necessary adjustments.

“They had 11 guys inside the box, so we decided we had to adjust. Fortunately, we have some kids that can make some plays. We got the ball to them at the right time,” he said.

From there, the Raiders ran just 14 more plays from scrimmage, as the Hornets started the third quarter with a 9-play, 75-yard march which consumed the opening four minutes.

Stapleton scored from a yard away making it 26-7.

After a River Valley three-and-out, Coal Grove ended the scoring with another five-play drive, highlighted by Borders’ 32-yard pass to Justin Hicks – before his touchdown toss to Jarren Hicks. 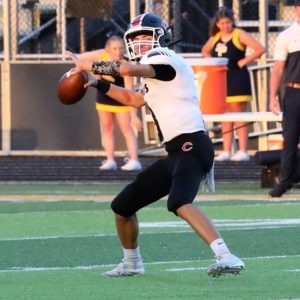 The Raiders then went three-and-out two more times, sandwiched around a 17-play Coal Grove drive which featured nothing but running plays involving the backups.

The Hornets held the ball from the 10-minute mark until just 17 seconds remained.

Borders threw an interception on his final play of the night, but aided in rushing with exactly 50 yards on only five carries. 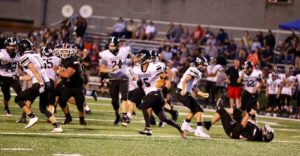 His counterpart Burns completed 5-of-15 passes for 84 yards, as Joe Abrams ended the Raiders’ last-best scoring opportunity – intercepting Burns at the goal-line with a minute-and-a-half left before halftime.

River Valley hosts Gallia Academy on Saturday night in that series finale, while the Hornets return home – and return to non-league action – next Friday night against Valley.

For this Friday night, though, it was a highly-successful homecoming for Lucas.

“We’re glad to be back and this team is finding its way,” he said. “I’ve been here a long time, and the expectation is to win. I know that, and I expect our kids to go out and play well. It was great to get the win, our kids really responded well, and I thought our kids got better as the game went on.”