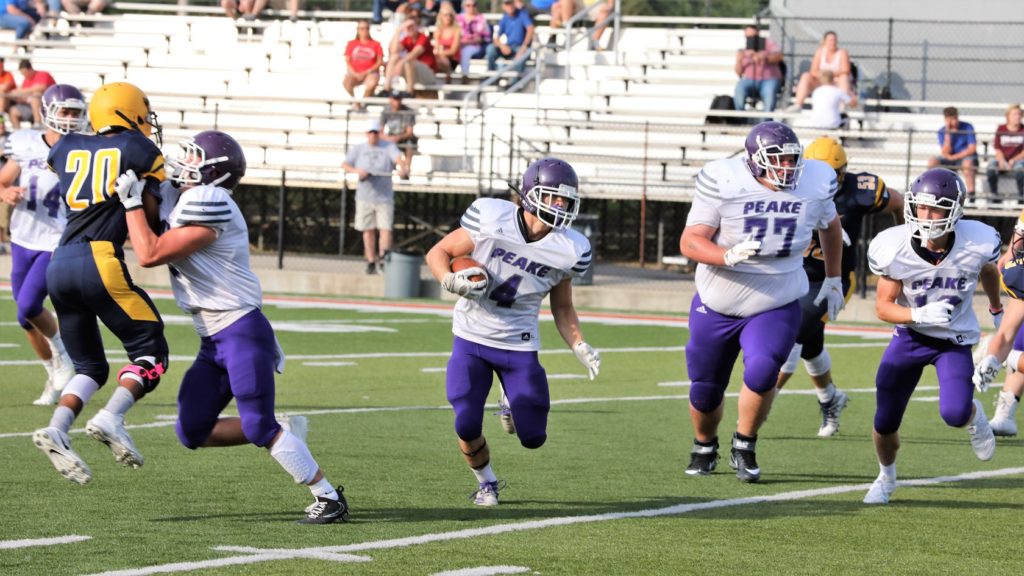 Truth be told, these two should always be on each other’s schedules.

Two long-time, and old-guard, Southeastern Ohio Athletic League rivals renew their series starting on Friday night – as the Jackson Ironmen and Athens Bulldogs square off once again on the gridiron.

And, as usual with these two tradition-rich programs, there is plenty of interest and intrigue.

In a key early-season and now non-league encounter, Jackson travels to Athens with the potential of plenty of playoff points at stake.

The two schools were charter members of the SEOAL which formed in 1925, but Athens left the league for the Tri-Valley Conference after the 2007 season – and the question has lingered since as to why they don’t play as non-conference opponents every year.

They actually did in the 2011 Division III playoffs, as both clubs entered after perfect regular seasons, with the Ironmen capturing a 27-7 victory.

But enough with past history, the focus for Friday night is the here and now inside Rutter Field in The Plains.

The new-look Bulldogs, with new QB Joey Moore, bolted out to a 27-14 second-quarter advantage against the host Waverly Tigers.

But the Tigers shut out Athens in the second half, scoring the final 17 points to prevail 30-27 in both squads’ season openers.

Moore did his part, completing 24 passes on 38 attempts for 278 yards and a hat trick of touchdowns with one interception.

He added 60 rushing yards on 26 carries.

Shoemaker shredded Athens’ run defense for 201 yards and four scores on 25 carries, scoring from 25, 22 and 18 yards away.

Athens also allowed 160 yards through the air on 26 attempts and 15 completions by Tiger quarterback Hayden Shanks.

Parks, the reigning Southeast District Defensive Player of the Year, returns to the Ironmen after serving a one-game suspension in the season opener.

But the Ironmen didn’t miss Parks against archrival Wellston, as Jackson – in the final meeting between the long-running Jackson County rivals – stymied the Golden Rockets to only 48 total yards and did not allow an offensive touchdown.

The Ironmen ended the series scoring when they sacked Kemp in the end zone for a fourth-quarter safety.

But Jackson’s offense struggled somewhat – outside of scoring on two long first-half runs.

Jackson coach Andy Hall hailed his Ironmen’s defensive play, but indeed acknowledged inconsistency on offense, which must be improved in order to succeed against Athens.

Many observers are predicting a close and competitive contest, with a final score ranging in the low 20s or even high teens.

Both clubs are quite capable of big plays, but the marquee matchup will definitely be the Bulldogs’ offense against the Ironmen’s defense.

Two teams coming off injury-riddled 2018 campaigns opened on the right foot this season, setting up a key early-season affair on Friday night.

Minford travels to Chesapeake in a battle of week-one winners, as kickoff at Phil Davis Stadium in Chesapeake is set for 7 p.m.

This is the first meeting between the two since 2001, as both teams impressed in their season and home openers last week.

The Panthers, in head coach Todd Knipp’s debut, defeated the Oak Hill Oaks 35-13 in the final meeting of that series.

Chesapeake rolled up a massive 365 yards on 51 rushes, including 127 on only eight carries by two-year starting quarterback Donald Richendollar.

Richendollar attempted just two passes, but his lone completion was a 25-yard touchdown to Kamren Harless, which gave the Panthers the lead.

Minford, meanwhile, rolled Rock Hill – where Knipp was the head coach for 13 years before spending the past two as an assistant at Chesapeake.

The Falcons took advantage of big plays en route to the 43-12 rout, starting with senior Ty Wiget returning the opening kickoff 81 yards for a touchdown.

Wiget, who closed the scoring with a 68-yard TD burst, rushed for 121 yards on 14 carries – and junior quarterback Elijah Vogelsong-Lewis threw for 163 yards and two touchdowns on 10-of-17.

Minford answered both of the Redmen’s touchdowns with scores of its own, and held strong for the most part against Rock Hill’s run-oriented two-tight end T-formation offense.

This week, the Panthers present an entirely different offense against the Falcons, while Chesapeake will try to slow down the Falcons’ spread attack and speed.

This year’s installment between Portsmouth and Portsmouth West will take place in West Portsmouth, with kickoff set for 7 p.m.

The two teams have played continuous since 2001, with the Trojans holding a slim 10-9 advantage, while West won the 2002 playoff matchup – en route to advancing to the Division IV state championship game that year.

This year, the Senators are perceived to be in the midst of rebuilding, having graduated the likes of all-district first-team honorees Trevor Staggs (defensive lineman), Josh Berry (offensive all-purpose) and Garrett Hurd (running back).

West won its opener in easy fashion at Columbus KIPP Academy by 40 points (48-8), while the Trojans topped visiting Valley 32-27 in a Thursday night nail-biter.

However, Parker scored all five of the Trojans’ touchdowns for 30 points, including the game-winner with 38-and-a-half seconds remaining on a 10-yard pass, in which he broke an open-field tackle at the Valley 5-yard-line.

Parker also recovered a fumble in the end zone for a Portsmouth score.

Look for the young Senators to also key on Parker, and try to follow the Indians’ blueprint of surrounding and swarming him followed by gang-tackling.

An experienced West squad shut out the Trojans and Parker last season, 13-0.

But this year’s Trojans sport 14 seniors, several of which will play major roles in determining Portsmouth’s success.

However, its offensive line is young and inexperienced, and needs to improve based upon its performance against Valley.

It will face another tough test from the determined Senators, which like Valley are members of the Southern Ohio Conference Division II.