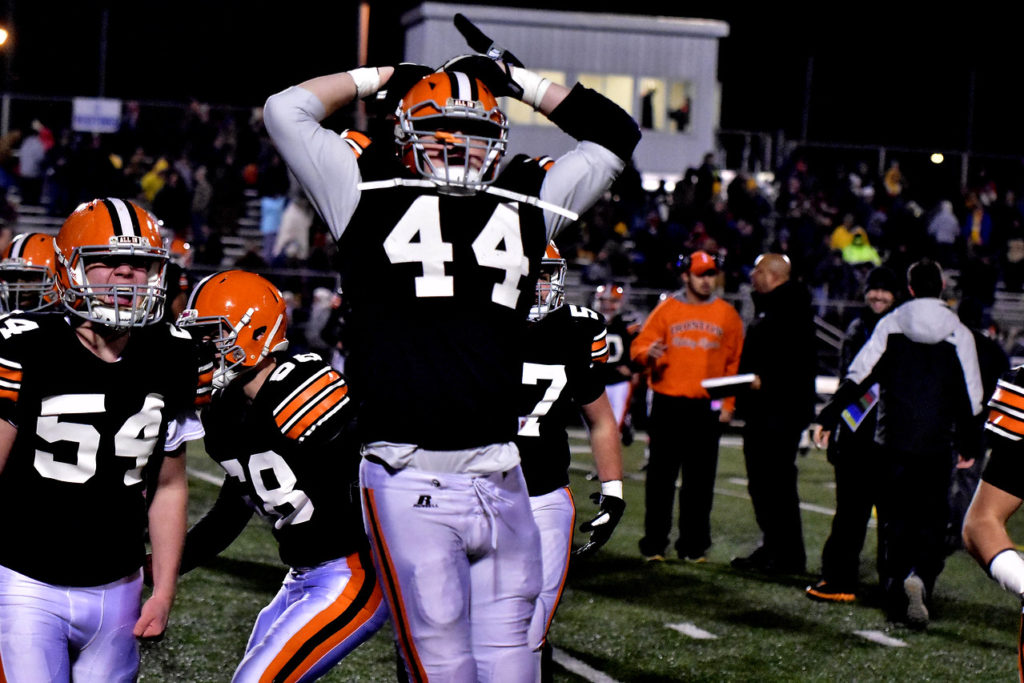 Ironton on to Canton:

Because, to be honest, it would be — and should be — fair enough to take one night at least…and party like it’s 1999.

For the first time in two decades, the proud and tradition-rich Ironton Fighting Tigers will play for an Ohio High School Athletic Association state football championship — this time being for the Division V title on Saturday night, Dec. 7. 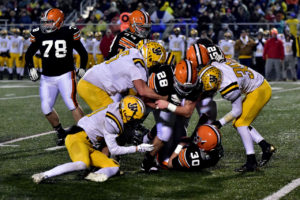 That’s because, in the state semifinal inside rain-soaked Herrnstein Field in Chillicothe, the Fighting Tigers simply took it right at — and directly to — the West Jefferson Roughriders, running roughshod in the second half for an impressive 49-21 victory in the two storied programs’ first-ever meeting.

Both clubs entered the contest at 12-1, but Ironton — after winning its first regional championship since 1999 for its 12th all-time — obliterated the Roughriders over a 24-minute stretch to punch its ticket to the state championship game.

The Fighting Tigers broke a 14-14 tie just 15 minutes in by scoring the next 35 points over the next 21 minutes and 20 seconds, and even put the OHSAA’s running-clock rule into effect for the first six minutes of the final quarter.

As a result, Ironton advances to its ninth all-time state championship bout, but the first since 1999 — when the Fighting Tigers lost in controversial fashion to Sandusky Perkins for their sixth all-time state runner-up. 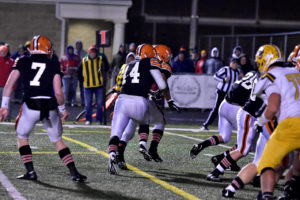 The Fighting Tigers take on undefeated and powerhouse Kirtland, a four-time state champion and the defending Division VI winner from a season ago.

All four of the Hornets’ state titles are within the past 10 years, as Kirtland — the Associated Press poll champion for Division V — doubled up third-ranked Oak Harbor 28-14 in the other Saturday semifinal.

But who can blame him? 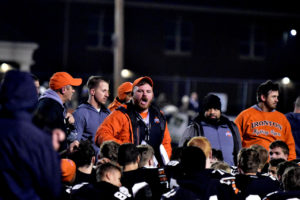 “I’m excited, but I wish next week was here right now. I’m ready to go,” said an overjoyed Pendleton, in a media interview following the semifinal win. “Our kids have earned this and have worked all year. We use the word ‘earn’ a lot in our program. Everything is earned and nothing is given. Our kids have this opportunity, so we are excited and can’t wait to play for the state championship.”

The Fighting Tigers earned that state title tilt appearance with one of the most dominating second halves in the illustrious history of Ironton football — or by any team at any time truth be told. 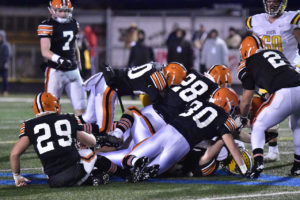 They also converted a Roughrider turnover in each half into points, and amassed 224 yards and 28 second-half points on only 20 rushes — doing so in just a matter of seven minutes and 27 seconds and without attempting a single pass.

In addition to the two second-half punts, the Roughriders turned the ball over on downs following four plays halfway through the third quarter — before Ironton standout Reid Carrico made the defensive play of the game, intercepting West Jefferson quarterback Tyler Buescher on the opening play of the fourth quarter and returning it 54 yards to the 2-yard-line. 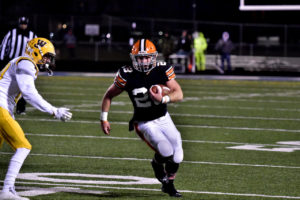 The Roughriders finally ended an almost 28-minute scoring drought when Gabe Jones — the standout senior running back who set several West Jefferson school rushing records including over 2,600 yards this season entering Saturday night — scored on a 9-yard run with 5:46 remaining.

Jones finished with 116 yards and two rushing touchdowns on 28 carries, as 53 of those yards came on that final nine-play, 68-yard, six-minute scoring drive.

But that only stopped the running clock, and did not stop the Fighting Tigers from more importantly running out the clock — including Avery Book successfully converting a fake punt by running for 14 yards and picking up a first down with under four minutes remaining.

Book punted just twice in the first half, successfully kicked all seven of Ironton’s extra points, and executed each time sky-ball kickoffs which West Jefferson was forced to fair catch and couldn’t return.

For the second consecutive game, the Fighting Tigers looked rock-solid in all three phases. 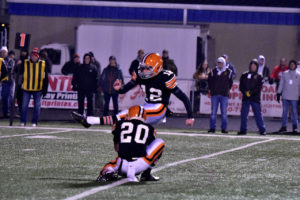 “Guys just played extremely well and extremely hard. Their played their responsibilities great,” said Pendleton. “Defensively, we were aggressive and swarmed to the ball well and we knew once again what we wanted to take away. My brother (Jerrod Pendleton) is our defensive coordinator and has done a great job all year with these guys. We got two turnovers and converted them into points off short fields, and any time you do that, you are in good shape. Offensively, I told our guys to just keep pounding and keep pounding and keep pounding and things will eventually pop. And they did. We condition ourselves hard and we prepare for four-quarter games all the time. We’re happy to see it pay off.”

The Fighting Tigers and Roughriders stood tied at 14-14, thanks to Jones returning a kickoff 94 yards for a touchdown just three minutes into the second quarter. 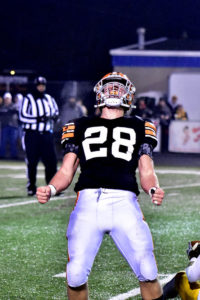 But after an exchange of three-and-out possessions, it was all Fighting Tigers from there — as Ironton got the “pop” it finally needed when Carrico broke off a 72-yard touchdown run on an extremely well-executed option pitch.

Book booted the extra point at the 5:46 mark to make it 21-14, and the Fighting Tigers were just warming up. 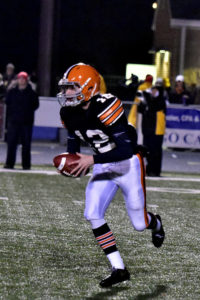 West Jefferson punted on its next possession from midfield, and its next series ended the half — but with Buescher being tackled for a 12-yard loss from the 50-yard-line.

The Roughriders’ first second-half series produced another punt from midfield, as Ironton then went up 28-14 with 7:11 left in the third quarter — following a quick five-play, 79-yard drive that culminated with Carrico carrying the final 12 yards to paydirt.

All five plays, in fact, went for at least a dozen yards on that march — starting with wide receiver Jordan Grizzle going in motion and picking up 19 yards on a jet sweep. 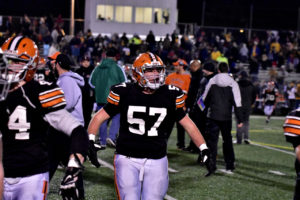 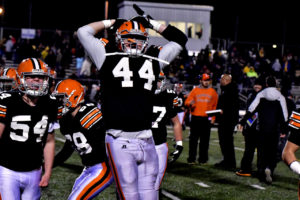 Gage Salyers, the quarterback who rushed for 69 yards on 10 carries and completed two first-half passes including one to Carrico for eight, scampered for 16 and 14 yards — while Carrico gained 13 before his 12-yard TD sprint.

The Fighting Tigers then forced the Roughriders’ four-play turnover on downs, as Seth Fosson first got things going with a 10-yard sack of Buescher. 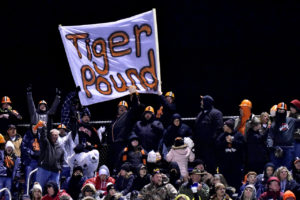 Buescher — often under duress from the Fighting Tigers’ front seven — finished with six carries for minus-35 yards, having completed seven of 15 passes for 54 yards.

Speaking of 54, the Tigers then drove that many yards in four plays and two minutes — as Carrico carried for eight and 11 yards before Salyers escaped pressure for 17 and 18 yards, as his 18-yarder was a touchdown dart that made it 35-14 with 3:47 remaining in the third.

The Roughriders then went three-and-out and only gained a yard, as Carrico — standing six-foot three-inches tall and weighing 225 pounds — dashed directly up the middle on the first play following for a 70-yard touchdown run to make it 42-14 only a minute and 11 seconds after Ironton’s last score. 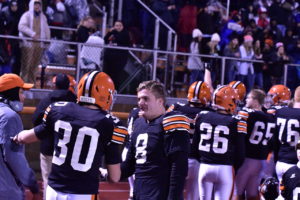 For Carrico, it was arguably his best game of his junior season — and definitely was offensively for the Southeast District Division V Defensive Player of the Year.

He carried 18 times, 13 of which were in the opening half, for a massive 234 yards and his hat trick of TDs.

Ironton ended up with 403 rushing yards on 45 attempts, as Grizzle — on that change-of-pace in-motion jet sweep — gained 47 yards on three tries. 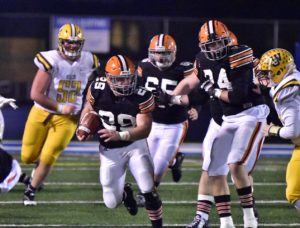 That immediately followed Carrico’s pickoff of Buescher, as perhaps more impressive was his burning 54-yard return.

That was the second turnover which West Jefferson committed, as the first was a lost fumble — which ultimately tied the game at 7-7 with a single solitary second left in the opening quarter.

The Fighting Tigers had driven a dozen plays before Book punted from the Roughrider 35 down to the 6, as Jones — who carried five times for 17 yards and scored on a 2-yard run following an Ironton interception and 24-yard return by Blade Wolfe — fumbled from the 10-yard-line and backwards.

Dalton Crabtree recovered for the Fighting Tigers at the 6, and Fosson found the end zone off the left side just six seconds later.

Pendleton said that sudden-change situation flipped not only the field, but the Fighting Tigers’ switch. 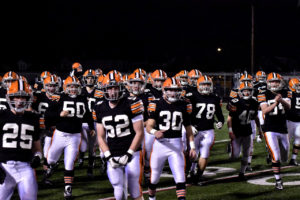 “That was a huge play and touchdown to get for momentum and get things going our way,” he said. “We got the turnover, we got great field position, got the touchdown and got our entire team going.”

That it did, as the Roughriders went three-and-out on their next possession to start the second quarter — and Ironton needed just five plays, 42 yards and a minute and 20 seconds to take the lead.

And, although Jones took the ensuring kickoff 94 yards to the house for the 14-14 tie, West Jefferson — competing in its second state semifinal under 18-year head coach and Southeast Ohio native Shawn Buescher — didn’t do anything of ANY significance after that. 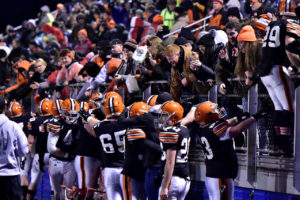 But speaking of significance, the Fighting Tigers are now indeed aiming for their third state championship in school history.

And while perhaps — for one night only — the enormous and enthusiastic Ironton fan base was partying like it was 1999, Pendleton pretty much put the Hornets on notice already.

“We got one more. On to Canton. Kirtland is on the clock,” he said. 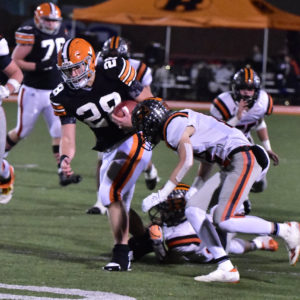 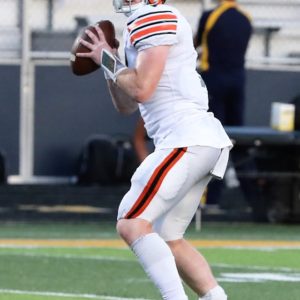 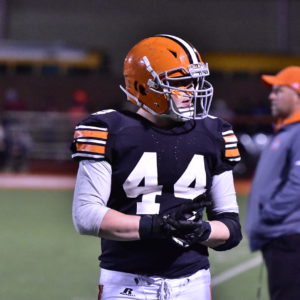 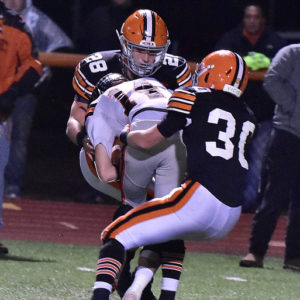 The Road to Canton