WAVERLY — Simply put, the Waverly Tigers are at a point where they haven’t been in 12 years.
Now, they aim to be playing a football game beyond 12 weeks.

That’s because the Tigers, competing in their first regional semifinal since back-to-back quarterfinal victories in 2006 and 2007, tussle with the Bloom-Carroll Bulldogs in a Division IV Region 15 tilt on Saturday night.
And, not only is Waverly within striking distance of program history — and playing in its first-ever week-13 — but it is arguably within shouting distance of its home field for this regional semifinal game.

Like the other 15 teams remaining in Division IV, the Tigers and head coach Chris Crabtree are just happy to be playing in November.

No matter where, and no matter whom.
Instead, the Tigers have a date with history — and perhaps destiny.

Waverly has played in a regional final before, defeating the now-defunct Cincinnati Academy Physical Education (CAPE), but that was back when only four clubs qualified for the state playoffs.

“There’s only been a handful of teams that have won 10 games in a season and won a first-round playoff game. But no team at Waverly has ever won a second playoff game in a season. One thing this group has been good about is accomplishing goals and starting new things and overcoming obstacles. We were really excited for our kids to finally get that monkey off our back and get a playoff win, since it had been a while,” said Crabtree, in an interview on Tuesday. “It would be nice for us to set the bar and move on to the next week and that week be week-13. And we couldn’t ask for a better scenario, to be able to make a short drive (to Chillicothe) and play right up the road. But it doesn’t matter at this point where you win or how you win, as long as you win by one point.

There’s no such thing as an ugly win right now. A win is a win in the playoffs, and the fun is in the winning.”

But Bloom-Carroll — from Fairfield County making the trek southward —is already 1-for-1 in the postseason in winning away from home.

Both teams are 9-2, but the Bulldogs advanced by upstaging second-seeded Indian Valley in a 48-39 slugfest in that regional quarterfinal.

However, while that was a shootout, Waverly was rolling visiting Gallia Academy with a 40-0 blowout shutout.
While Waverly is better-known for its fast-paced quick-strike spread-the-field offensive attack with 2,000-yard running back and playmaker Payton Shoemaker, it was the Tigers’ defense that did the job against the Blue Devils — forcing five turnovers.

“We expected Gallia Academy to come out and play their best, but never did I imagine that score (40-0) was going to be the turnout,” said Crabtree. “I thought we had a good chance, but to get a shutout in a playoff game like that by a lopsided score is just a testament to our coaching staff and kids as far as their preparation and execution of the gameplan. Any time you can get turnovers especially at that margin of turnovers, it’s going to be good for you.”

The Tigers also recovered a Blue Devil fumble, and Shoemaker only added to his school-record rushing totals with an 18-carry, 146-yard, three-touchdown performance.

As always, the Tigers’ plan is to establish Shoemaker, opening up the passing attack for junior quarterback Haydn’ Shanks.

“We’ve never been concerned with time of possession. We score quick sometimes, but if we can get a drive that can eat some time up, that’s okay too,” said Crabtree.

“Establishing Payton in the running game early is going to change things one way or the other. A fast start for us is always good.”

But the Bulldogs will counter with a similar spread offense, spearheaded by quarterback and all-around athlete Otto Kuhns.

Kuhns has tallied 10 touchdowns passing, six rushing and even one receiving, as Evan Willett — Kuhns’ top target — has 38 receptions for 470 yards.

Kuhns is also the Bulldogs’ punter, having kicked 16 times for an average of 38-and-a-half yards per punt — with four kicks inside the 20-yard-line.

Crabtree compared the Bulldogs’ offense to Minford with their spread-the-field formation sets — and dual-threat ability of Elijah Vogelsong-Lewis.

“Their quarterback is their guy,” said the coach. “He runs the ball and throws the ball for them. They rotate so many people in and out running the ball, so nobody is going to have huge rushing numbers for them. They are very versatile, but the quarterback has had a lot of success there and he makes them go. He is mobile, they move him around, they want to roll him out to get him out there and throw the ball. He is pretty accurate too as a passer. Their routes are a lot of quick and short ones where Kuhns can get the ball out quickly. They can nickel-and-dime you with the pass, the quarterback can pick up first downs when he needs to, and they can take the top off and get downfield if they need do. When they throw deep, they like to roll him out.”

Hobie Scarberry carries the ball when Kuhns does not, amassing 104 carries for 564 yards and seven scores.
Against Indian Valley, the Bulldogs actually were doubled up in time of possession by almost 15 full minutes

He also rushed for three TDs and 83 yards on 13 carries, offsetting the Herculean 39-carry, 261-yard, four-touchdown effort by Indian Valley’s Zach Love.
It helped, too, that Eli Coppess returned a kickoff 80 yards to the house.

“I think it’s a good matchup for us, just because of some familiarity,” said Crabtree. “They like to throw the ball, and they run a lot of 2×2 sets or 3×1 sets, a lot of power and counter, all of which we are very family with and it matches our athletic ability. Bloom-Carroll isn’t very big up front, but they are athletic on both sides of the ball. They only have one guy over 200 pounds on the offensive line, so that is a lot different than from what we’ve seen in the regular season. They do a good job of getting off the ball, getting on you and shielding you off. We have to go out and force those turnovers again this week, and get guys to the ball and prevent big plays from occurring. We have to make sure our coverages are sound again, and we have to get pressure on Kuhns and make him throw in uncomfortable situations.”

But Crabtree and the Tigers are not at all taking Bloom-Carroll lightly, as the Bulldogs’ victory over Indian Valley was considered by most observers as an upset.
Bloom-Carroll is making its seventh all-time state playoff appearance, as the Bulldogs defeated Unioto in last season’s Region 15 quarters.

The Bulldogs are now 2-6 all-time in the tournament, while Waverly is 4-7.
“At this level now, the second round of the playoffs, everybody is playing good football and with a lot of confidence,” said Crabtree. “That was a big win for them (Bulldogs) last week, but our kids came out and played well and are obviously very confident in what we’re doing.”

Now, that confidence carries over into the opening kickoff against Bloom-Carroll — and hopefully for the Tigers to a 13th week. 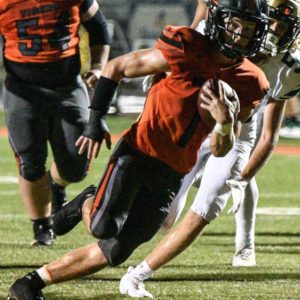 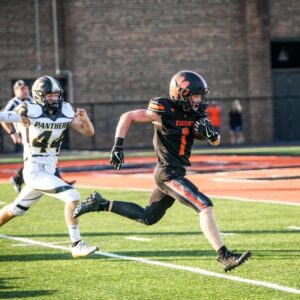