PORTSMOUTH – Believe it or not, Portsmouth’s Talyn Parker had more points (30) than he did rushing yards (21) on Thursday night.

But, what matters most, the senior standout Parker had more points than the visiting Valley Indians.

Parker scored all five of the Trojans’ touchdowns, including the go-ahead and game-winner with 38.5 seconds remaining, as Portsmouth pulled off a thrilling 32-27 come-from-behind triumph in the 2019 football season opener  – inside majestic Trojan Coliseum in Portsmouth.

It was Portsmouth’s fourth consecutive victory in this series, as the Trojans have scored at least 32 points in all four.

This one, though, on a spectacular night for football weather-wise, was the hardest earned. 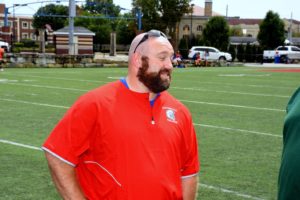 “I think I aged about five years in four quarters. That was just a barn-burner,” said an elated second-year Portsmouth coach Bruce Kalb. “Something we work on is how are we going to respond when we face adverse situations. In sports, it’s easy to blame the officials, blame this person, blame that person, or complain or get defensive. But our kids responded in a way tonight that kept this game going forward in our direction. In the end, we came out on top. We knew it was going to be a 48-minute battle, and our senior class made sure our kids didn’t quit.”

The Trojans, coming off their 7-3 regular season a year ago which included a Division V state playoff appearance, racked up 57 points on the Indians last year.

It marked the beginning of Parker’s explosive rushing season, as he amassed almost 300 yards – en route to a campaign of over 2,500 plus 29 touchdowns.

He is the reigning Division V Southeast District Offensive Player of the Year. 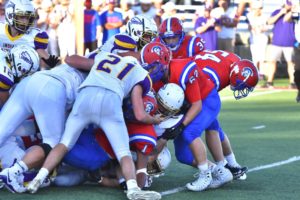 On Thursday, Parker was surrounded, swarmed under and gang-tackled by the Indians all evening, stymied to only 21 rushing yards on 17 carries.

He had 20 yards on 15 touches in the entire first half.

His longest official runs were a pair of five-yard second-quarter pickups, although he did have a fancy-footwork 53-yard fourth-quarter dash negated due to a crackback block.

Parker touched the ball on offense only three times in the second half, but his final touch was by far the most important.

With the Trojans trailing 27-26, and their 26-14 third-quarter advantage completely evaporated, Portsmouth pushed to the Indians’ 10-yard line – and faced a 3rd-down-and-6. 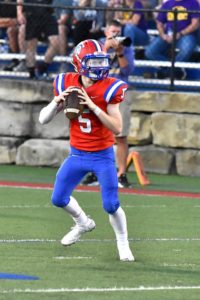 Drew Roe, the sophomore signal-caller making his first varsity start for the Trojans, found Parker open in the flat for the reception inside the 5-yard line.

Then, for once on Thursday night, Parker didn’t face an onslaught of Indians coming at him – and instead he broke a one-on-one tackle and found the end zone with 38.5 seconds left.

“Talyn gives you that extra gear. He saw paydirt and he made sure he got in there,” said Kalb. “He’s been working a lot this summer on being able to catch the ball out of the backfield. He came up big for us.”

That put Portsmouth in front 32-27, as the Trojans – capping a 50-yard, seven-play drive in only a minute and 21 seconds with no timeouts – took advantage of Valley’s second punt.

It followed an Indians’ three-and-out series, as the Valley punt near the two-minute mark sailed straight skyward, and eventually was covered by the Trojans at midfield.

For whatever mistakes the Trojans made on Thursday, and they did commit nine penalties for 90 yards, Valley made more – and Portsmouth made it pay. 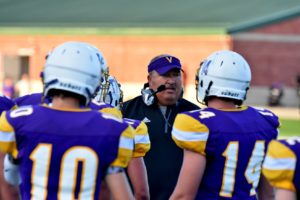 “We were our own worst enemy tonight,” said Valley coach Darren Crabtree. “We had a lot of penalties, a bad snap on a punt, a big kickoff return that lead to their first score, we fumble and they recover in the end zone, we missed some opportunities to get off the field (on defense). I told our kids that I don’t know that the best team tonight won. Parker is still, hands down, the best player on the field. But we let ourselves really get in our own way.”

The Indians were whistled for a dozen penalties for 103 yards, and three personal-foul penalties – including a pair of roughing-the-passer calls – aided in the Trojans’ three first-half touchdowns.

But perhaps no Indian penalty was bigger than in the Trojans’ final scoring drive, as a pass interference flag on 2nd-and-10 moved the hosts from the 27-yard-line to the 14. 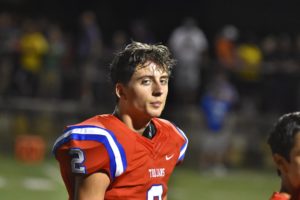 Roe then connected with Bryce Wallace for nine yards to the five, as a Portsmouth illegal procedure pushed the ball back to the 10, setting up the Roe-to-Parker pass completion two plays later.

For his part, Roe performed quite well on his biggest stage to date.

He completed 10-of-24 passes for 146 yards, did not throw an interception, and knew when to throw the football away.

Kalb said the Trojans only averaged about seven passes per game last season, but they had to offset the Indians stacking the box on Parker – and Portsmouth only rushing for 28 yards on 26 tries.

“We did stop Parker on the ground. The kids did a real nice job of tackling him. Our outside guys came up and forced and made the tackle. Our interior seven guys played extremely hard and gang-tackled him, which is what you have to do,” said Crabtree. “But we also talked before the game about not letting their other players beat us.”

“We knew Valley was going to come in with that defensive gameplan. When you have a young man like Talyn (Parker) and a young and inexperienced offensive line, we expected that from them. But Drew Roe really stepped up tonight,” said Kalb. “We ended up deciding today (Thursday) that he was going to be the one to lead this offense. He is an ‘X’ factor with his legs and his decision-making. He is a sophomore stepping into a very senior-laden group, leading the team on that game-winning drive.”

While Wallace caught three passes for 37 yards and Tyler McCoy one for 23, it was the tight-end drag pattern between Roe and Michael Duncan that made a major difference.

Duncan, the fellow sophomore who battled Roe in Portsmouth’s preseason quarterback competition, did his job at tight end – and caught four passes for 69 yards. 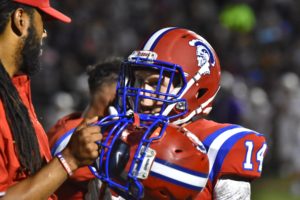 “Hats off to Michael Duncan tonight. He was battling Drew Roe for that quarterback position. As a junior, he said he wanted to see the field, and he told us that he can play at tight end,” said Kalb. “As a quarterback, he knows all the routes and all the blocking schemes, and he stepped up big time.”

Parker’s final of five touchdowns followed his first-half hat trick of short rushing ones – on plunges of two, four and three yards.

Valley’s punting problems set up the Trojans’ TD that gave them the 20-14 lead with 45-and-a-half seconds left before halftime.

Near the six-and-a-half minute mark of the second stanza, and with the Indians in their own territory between the 27 and 47, Valley’s Andrew Andronis lined up to punt the ball set at the 37.

An Andronis punt from the 42  on the previous snap rolled deep into Trojan territory, but the Indians were flagged for a false start – and forced to re-kick.

On the second attempt, the ball sailed high over Andronis’ head, and he could only fall on the pigskin at his own 12-yard line.

Although the Trojans didn’t score, they had flipped field position, and Valley’s first three-and-out series resulted in a 29-yard punt from the six with an 11-yard return.

From the 24, Roe found Parker for a seven-yard completion, as Parker accounted for the final two plays – the second of which was the 3-yard TD run.

More poor field position set up the Trojans’ next score, making it 26-14 midway through the third frame.

A 40-yard Portsmouth punt pinned the Indians at the 12, as a holding penalty and an incomplete pass set up 2nd-and-15 from the seven.

With Andronis in the shotgun, and almost on the goal-line, he never got the snap as he himself somewhat mishandled it – and a sea of Red buried him under as the ball was loose.

Parker recovered the fumble in the end zone, making it 26-14 for Portsmouth’s largest lead.

“This early in the season, it’s who is going to make the fewest amount of mistakes, and who is going to capitalize when the other team makes a mistake,” said Kalb. “We had a defensive score in the end zone, and they had a high snap which turned the first-half field position in our favor.”

However, the Indians answered over the next 12 minutes and 40 seconds, erasing that dozen-point deficit to seize a 27-26 advantage with five minutes remaining. 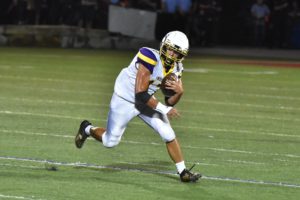 Late in the third, and in between runs by Kayden Mollette and Andronis, Andronis found Mollete for a 20-yard gain to the Portsmouth 22. 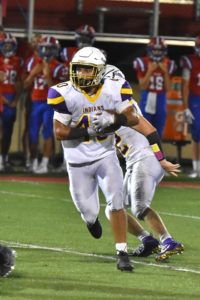 Daegan Glover completed a 10-play, 65-yard four-minute and 51-second scoring drive with a 1-yard dive at the 56-second mark.

Austin Sommers’ third successful extra-point kick made it 26-21, as the Indians then forced a pair of Portsmouth three-and-outs.

The second such punt following those was from deep in Trojan territory, as Valley quickly moved 42 yards in five plays and a minute and 51 seconds, staking the lead with 5:08 to play. 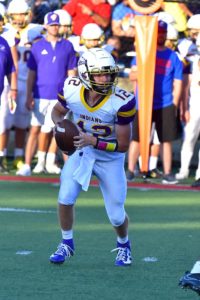 For the second time in the game, Andronis found freshman Tyler Perkins on a deep slant route for a touchdown – this time on a 30-yard pitch-and-catch, in which Perkins was wide open at the 20 when made the reception.

Like Roe, the junior Andronis made his debut under center, and threw for 164 yards on 8-of-20, while leading all rushers with 74 yards on 19 totes. 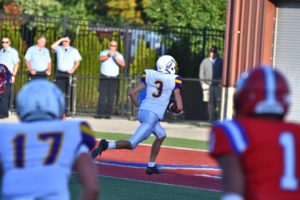 “Our kids played hard, their kids played hard, it was a great ballgame to watch,” said Crabtree. “We did some good things, such Kayden Mollette running the ball really hard in the second half and a couple of pass plays produced touchdowns. But we made too many mistakes, the stupid things that we did won’t beat anybody. Every time we made a mistake tonight, it came back to bite us.”

In the first half, Andronis accounted for Valley’s two touchdowns, trading two scores apiece with the Trojans for a 14-14 tie with 9:21 left in the second quarter.

Andronis found Perkins on a 20-yard deep slant to cap a nine-play, 79-yard drive, then ran the final 11 yards himself to end an eight-play, 63-yard march.

The Trojans answered each with Parker’s first two touchdowns – finishing a five-play, 21-yard drive that was set up by Eric Purdy’s 61-yard kickoff return and an impressive 11-play, 65-yard series in four minutes and 10 seconds.

James Thurman successfully kicked both of those extra points.

Sommers made his first three PATs for Valley, but missed on his final attempt.

The Indians return to the road, and return to non-league action, next Friday night at Coal Grove.

“It was a good high school football game. Somebody is going to win and somebody is going to lose,” said Crabtree. “We came up short, but we’ll get back to work. We’re all disappointed we lost, because we felt like we were in a position to win. The mistakes we did make tonight, we do know we can correct those.”

“We have to make sure we cut out the mental mistakes,” said Kalb. “We made some errors tonight where we shot ourselves in the foot, but those are fixable, which is a good thing.”

For the Trojans on Thursday, Parker’s points (30) were a great thing – much more so than his rushing yards.