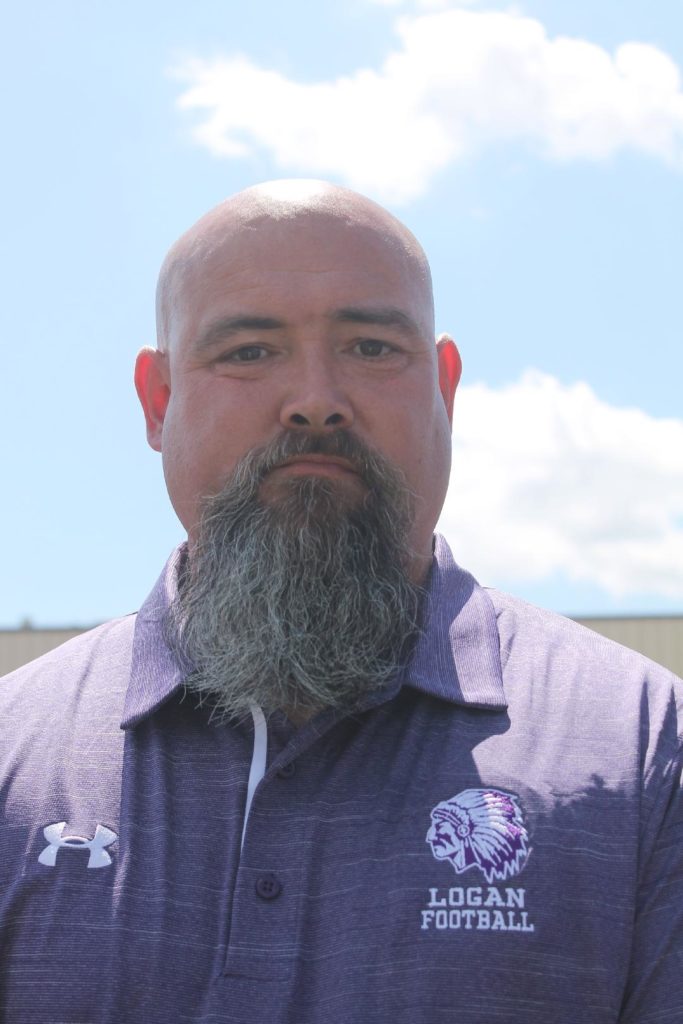 Logan has had only two winning seasons in the last nine

Since the beginning of August the Logan Chieftains got a private lesson from Logan High School choir director John McClain, invited every living former captain back for a “Captains Appreciation Day,” and started their own Facebook page.

To say Mike Eddy has embraced the culture and history of Logan HS is an understatement. Director McClain gave the team a private lesson to ensure they knew the LHS fight song and Alma Matter. Over fifty former captains returned for the “Captains Appreciation Day.” And the Facebook page has nearly 500 “likes” and “follows” in less than a month.

“We talked so much at the beginning about trying to change the culture, change the attitude, and for these players to set the standard,” Eddy told the Logan Daily News. Eddy explained that coaches control the program – but players control the team. The program is the game plan, the expectations, and the rules. The team creates the attitude, the effort, and the player-to-player leadership and accountability.

While Logan was a disappointing 1-9 last season, they did face arguably the most difficult schedule in school history. Five foes made the playoffs, four others were .500 or above, and the ten opponents combined for an 80-29 record for an unbelievable .734 win percentage. In the postseason, Sheridan reached the DIII regional final while Tri-Valley and Garfield Heights all earned first round victories in DII.

During the last half of last season the Chieftains switched from a spread offense to a veer option attack to try and best utilize the talent in the Chieftain backfield and to help the defense by controlling the game clock. Logan ran the ball on 87-percent of the offensive plays in the team’s final six games.

Overall 11 lettermen return and the Chiefs have 16 seniors on the 43 man roster.

Additionally Eddy, who was named the 31st head coach in Logan’s history in January, put together a veteran coaching staff. Five of the assistants (Jim Huntsberger, Justin Pack, Josh Sturgell, Pat Walsh, and Tim Woodgeard) return from last year and Eddy was able to add former LHS head coach Kelly Wolfe to round out the staff. Wolfe, an LHS Athletic Hall of Famer, had previously been on staff in some capacity from 1991-2012. Wolfe will be the offensive coordinator, coach the quarterbacks, and call plays. Wolfe did the same from 2007-2009 when Logan put up record setting offensive numbers.

Except for Eddy and Huntsberger (who has been on staff since 1990), the rest of the staff are not only LHS alums but former captains as well.

“When we did our recent ‘Captains Appreciation Day,’ I was the only coach left in the room,” Eddy told the Logan Daily News. Huntsberger was helping organize the event.

“Everybody here is invested in the community and they’re invested in the school system,” he added. “These kids and Logan football means a lot to them. They understand how important the football team is to this community.”

When looking at his team that will debut this Friday night in Dresden against Tri-Valley, Eddy hopes to develop enough depth up front and in key positions to be able to limit the number of full time two-way players.

And while everyone knows the kids have to learn new systems and terminology, the coaches are going through the same process.

“It’s easy to get confused – last year we called it this, but now we call it that, and I think that’s the hardest part,” Eddy explained. “The coaches are learning it, and they have to learn it before they can teach it. Then the players have to learn it.”

The Chieftains are on the right track according to Eddy.

On offense, Logan will operate primarily out of the shotgun using read-option and run-pass option (RPOs) while using motion from multiple backs and receivers to create mismatches and keep defenses honest. During the Chiefs’ scrimmages developing balance through the passing game has been a focus. 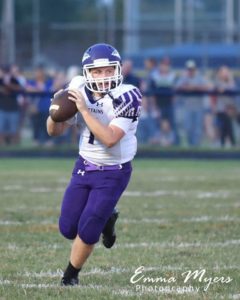 returns to pilot the Chieftain offense after holding off a challenge from junior Ian Frasure (5-10, 150). Spatar completed 55 of 104 passes for 644 yards, but threw only seven touchdowns against nine interceptions in 2018. Spatar was the team’s second leading rusher with 531 yards and three touchdowns on 129 carries.

Caden McCarty (6-0, 170, junior) was expected to work his way into more playing time last season to compliment Preston Yates at tailback, however a knee injury ended the sophomore’s season during the opener with Tri-Valley. McCarty has been a bright spot during preseason scrimmages. 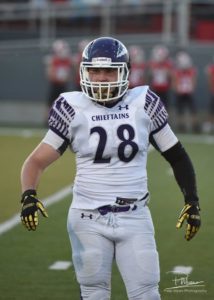 , and Conner Ruff (5-10, 190, senior). Justice worked his way into the backfield rotation last fall as a freshman while the Ruff brothers are three-year returning lettermen. Conner will start the season on the sidelines while recovering from a knee injury.

Jonny McClelland (6-0, 165, junior) and Traten Poling (6-0, 180, sophomore) will both play in the slot. The duo can be used in both phases of the game – especially on inside slants and on jet sweeps in the run game. Most importantly the pair can be counted on as reliable blockers.

Up front, Eddy and staff have been pleased with the development of the offensive line. Keiton Arledge (6-2, 295, sophomore) has opened some eyes at right tackle while Logan Vincent (6-2, 265, senior) has emerged as a consistent performer at left tackle. Trevor Wyckoff (6-1, 285, senior) and Sam Kisor (5-11, 220, senior) are returning starters at guard. The center is Carson Miller (5-9, 240, senior) who sat out last season to focus on track but has returned and earned the starting job. Quinn Walsh (6-0, 195, junior) can play at all three interior line positions while Dakota Banik (6-1, 270, senior) can fill in at tackle.

Defensively, Logan has struggled to consistently stop or even contain opposing offenses since Dale Amyx retired after the 2009 season. To that end, the Chieftains have recorded only two shut-outs in that time period and several seasons rank among the worst on record in terms of rushing, passing, and total yards allowed.

Turning that around will be a key job for Eddy and his staff.

“It’s getting guys to play disciplined and play inside of a gap scheme” Eddy again told the Logan Daily News. “They have to be under control at all times. That’s probably the biggest challenge, slowing them down a little bit because they want to turn out and get after it.”

From a base defense stand point the Chieftains won’t look drastically different. Logan will line up in a four man front with three linebackers and three defensive backs and the eleventh-man playing more of a hybrid linebacker-safety position called the “adjustor.”

But the results from preseason scrimmages are encouraging. Logan shut-out both Fairfield Union and Marietta in their final two tune-up games.

The linebacker unit suffered a blow when Conner Ruff sustained a knee injury during summer basketball. Eddy is hopeful they’ll get him back at some point this season. 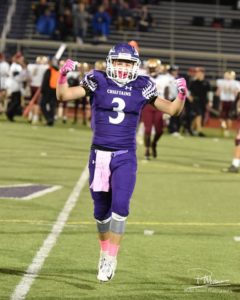 Mace and Castle both return as starters at cornerback while McCarty will be the free safety. McClelland and Frasure are both being groomed to play free safety to ease the workload on McCarty, who is expected to be the primary ballcarrier.

With guys like McClelland playing multiple roles, Eddy highlighted the importance of understanding the scheme. It’s also reliant on coaches being able to correctly teach the scheme to players.

“Maybe not your defensive linemen, but all your linebackers and your secondary players all have to know what everybody’s job is, to know where you’re probably going to get attacked, and where weaknesses and strengths are,” Eddy again told the Logan Daily News.

Israel Bookman (5-10, 130, senior) returns for his third season as placekicker. He has converted 28 of 35 extra points and two of six field goals the last two seasons.

Frasure and Spatar will handle punting chores, which Eddy notes will likely be in a rugby style.

Mace, McClelland, and McCarty are pegged for return duties.

The Chieftains will likely succeed if the team will buy in to Eddy’s program and culture correction exercise.

“I’ve seen them go through a lot of changes in just a couple short months,” Eddy told the Logan Daily News. “They really are trying to do the right things. Even when they screw up, they accept it, they move on, and they try to grow from it; and that’s all we can ask them to do.”

“The biggest thing for them is to not lose sight of winning and what it means to win,” he added. “You don’t want to fall into that trap of just going through the motions or just showing up just to be part of the team. You then lose sight of what winning’s all about and the value in it… if you lose long enough, you begin to hope you’re going to win instead of expecting to win.”

On that note, surviving the first four games will be important. All four opponents are defending league champions. Three of them made the playoffs last season. 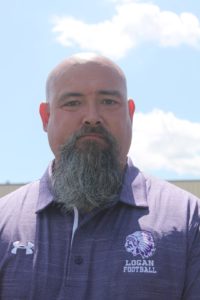 “(Expecting to win), that’s really the difference. We do have some talented football players. We have some pieces to be successful… what we’re dealing with is the mental part of it. Physically, it is what it is. You can’t really change that; we are who we are, but mentally we can be anybody we want to be,” Eddy  explained.

“It’s going to take some guys maybe doing more or giving more than they thought they could. The more times they experience those difficulties, the easier it is to understand how to work through them and how to accomplish them,” Eddy concluded.