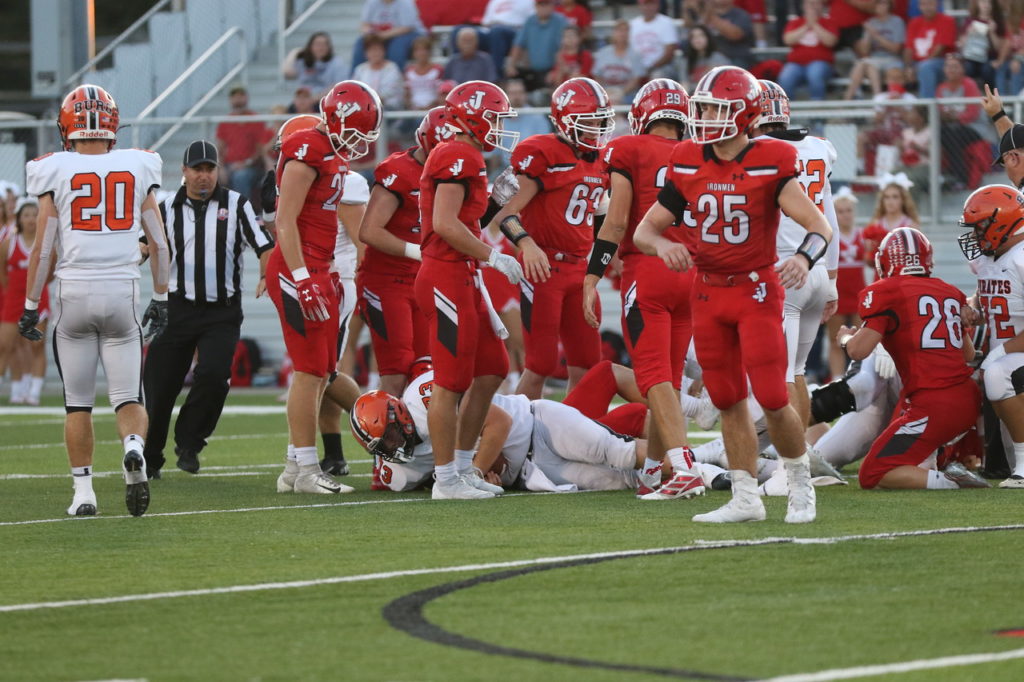 DIII, Region 9 matchup is one of only three unbeaten matchups statewide

If it feels familiar to see undefeated Jackson (11-0) vs undefeated Jonathan Alder (11-0) in week 12, that’s because it is. Last time around, in 2011, it was the Pioneers who marched to the regional final with a 28-7 victory over the Ironmen.

This season, only the location has changed, moving from Logan Chieftain Stadium to Teays Valley’s Viking Stadium in Ashville.

For the seventh time in school history – and third under head coach Andy Hall – the Jackson Ironmen finished with a perfect 10-0 record. While these Ironmen will look forward to wearing the coveted white jackets awarded to undefeated Jackson teams, they also hope to make even more history.

Overall, Jackson is making their 14th playoff appearance where they hold an 8-13 postseason record. They first qualified for the playoffs in 1996.

The team from the Apple City won the Frontier Athletic Conference title and defeated two playoff qualifiers during the regular season in Wellston and Wheelersburg.

Twice Jackson has reached a regional final – first in 1996 where a single playoff victory over Hillsboro moved the Ironmen one game away from the state semifinal, and most recently in 2015 where wins over Bexley and Columbus Bishop Watterson saw the red and white advance to a regional final where their season ended against Zanesville.

But no Jackson team has won 12 games in a season. And that’s something that Hall and his team hope to change on Friday night.

But Jackson isn’t the only school looking to make history. Jonathan Alder is returning to the playoffs for the first time since 2017 but make their 15th appearance over the last 20 seasons and 17th overall. The Pioneers are 12-16 all-time in the post-season, including trips to the regional final in 2004 and 2011 and a DIV state runner-up finish in 2006.

The 2019 versions of these two squads have been outstanding.

Jackson grid boss Andy Hall is in his 11th season and holds an astounding 92-29 record including seven playoff appearances. Hall is 5-6 in postseason games at Jackson.

The 2019 Ironmen rolled through their regular season schedule, with only a single game decided by less than two touchdowns. Their opponents went 47-53 in the regular season.

In last week’s playoff opener, the Ironmen rolled up 461 rushing yards – averaging over 10 per attempt – on their way to a 70-28 rout of Columbus Centennial.

Running back Jayden Spires (6-0, 205, senior) is the team’s top rusher with 176 carries for 1400 yards (7.95 per carry) and 20 touchdowns. The senior combines speed and power to overwhelm opposing defenses.

Classmate Brice Graham (6-2, 205) is another talented back who also broke the century mark and scored three touchdowns against Centennial last week.

At quarterback, Jared Icenhower (6-0, 185, senior) is a veteran, finishing his third season as the team’s starting quarterback. This fall “Ice” has completed 59 of 106 passes for 938 yards with 13 touchdowns.

Freshman Jacob Winters (6-1, 215) doesn’t look like a freshman – and doesn’t play like one either. Winters can play all over the field for the red and white – he’ll line up in the slot, the backfield, and even take snaps at quarterback.

The Ironmen are scoring 43 points per game.

Defensively, Jackson’s 3-4 base defense relies on speed and aggression in the front seven to get into the backfield and disrupt opposing offenses.

Up front, Joey Richison (5-7, 165, senior) is disruptive from his noseguard position while Ruckel and Anthony Parks (6-3, 200, senior) were all-league selections.

Winters, Graham, Prater, Icenhower, and Brice Parks (5-10, 190, senior) are talented in the secondary.

The Ironmen are allowing only 12 points per game.

Jonathan Alder is back in the playoffs for the first time since 2017, and their 35-13 win over Sheridan last week marked the first playoff victory for sixth year head coach Brett Glass. Glass is 49-15 overall and 1-3 in postseason play.

On their march to a perfect regular season, Alder was rarely challenged against a schedule that went 52-48 overall in the regular season. Their best wins were over playoff qualifiers Bloom-Carroll (42-13), Springfield Shawnee (56-34), and London (24-23). B-C and Shawnee are still playing football this weekend.

Offensively, the Pioneers rely on the speed and power of running back Garret Proxmire (6-0, 185, senior) who has rushed for 1,481 yards and 18 touchdowns on 231 carries. Proxmire ran for 106 yards and a score on 20 carries last week against Sheridan.

Quarterback JT Keith (5-9, 165, junior) gives the Madison Countians balance on offense, completing nearly 66-percent (143 of 217) passes for 1,933 yards and 28 touchdowns. He has been intercepted only three times.

Last week, Keith completed 28 of 40 passes for 266 yards with a pair of touchdowns and one interception in the win over Sheridan.

Last week, Fenik caught a season high 14 passes for 92 yards and a pair of scores while Izzard added eight catches for 110 yards.

Fenik might be a familiar name to the Jackson County contingency. His father, Mark, was an All-SEOAL selection for the Ironmen as a senior in 1981 and his grandfather Ron was the JHS head coach in the mid-1970s.

Defensively, the black and red line-up in a 4-2-5 base defense that might shift to more of a true 4-4 look to combat Jackson’s power running game.

Izzard, Fenik, and Drew Begin (6-0, 180, senior) play in the secondary and combined for six interceptions during the regular season.

The Pioneers are allowing only 17.5 points per game.

Friday night’s game will likely come down to which team can better control the line of scrimmage. Alder has shown better balance on the offensive side of the football but might struggle to contain the athletic Jackson linebackers in pass rushing situations if the Pioneers are not able to get Proxmire going in the run game.

Conversely, Jackson doesn’t have an offense built to sling the ball around more than a dozen times per game. If Spires and Graham are held in check, the Pioneers will like their matchups in the secondary.

In the kicking game, Alder’s Dylan Moore has been perfect this season converting all 55 extra point tries and all three field goal attempts including a last second game winner against London in week 10.

For Jackson, Isaac Kuhn has also been a reliable booter for the Ironmen.

Will history repeat itself with the Pioneers defeating Jackson to move to 12-0? Or will Jackson write their selves into the JHS history books by moving into the regional final at 12-0?