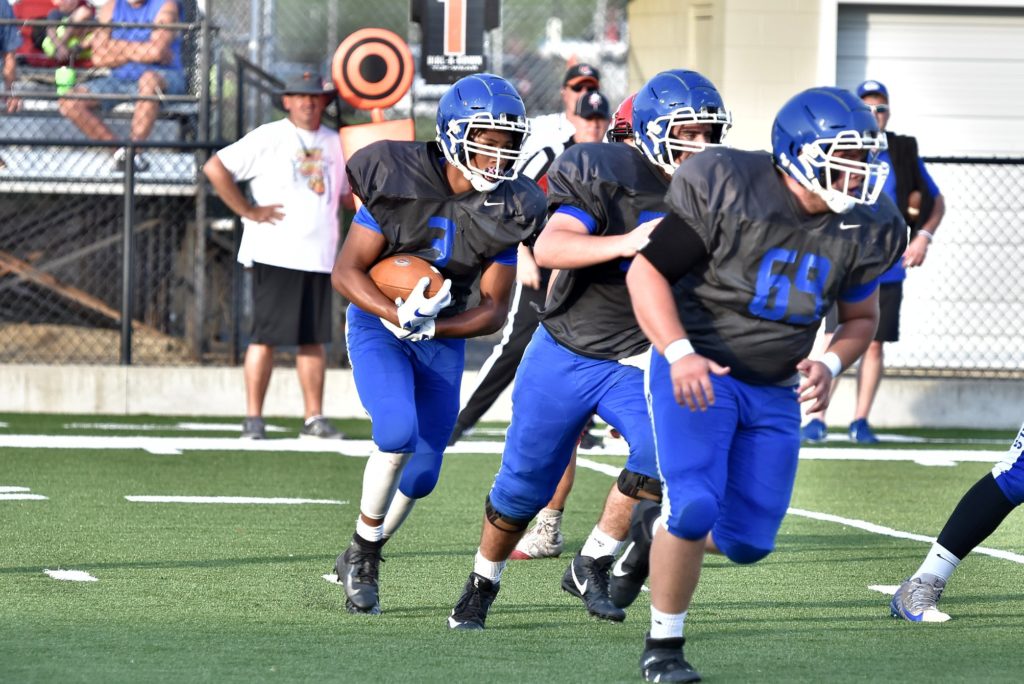 “The Battle of The Bridge” is indeed back, and this time, it’s extremely interesting.

After a two-year hiatus, the annual Ohio River rivalry between the Gallia Academy Blue Devils and the Point Pleasant Big Blacks resumes on Friday night – and both teams are looking to remain undefeated.

But, the Blue Devils are already 2-0, while the visiting Big Blacks – believe it or not – have yet to play a game this season.

In addition, it’s a new-look Point Pleasant squad up against an experienced Gallia Academy club  – coming off its stellar 9-2 campaign and already with two shutouts to start this year.

Kickoff is set for Friday night at historic Memorial Field in Gallipolis at 7 p.m.

But the Big Blacks of Class AA in West Virginia are a step – or two – up in competition for these up-and-coming Blue Devils, as Point Pleasant has recently dominated the long-running series that stopped after 2016.

That year, as the current Gallia Academy seniors were just freshmen, the program went 1-9 – and lost at powerful Point Pleasant 61-12.

Payne rushed and passed for 1,000 yards two times each in those four years, as the Big Blacks qualified for the Class AA playoffs in each.

The Big Blacks do return senior offensive linemen Jacob Muncy and Nate Barth, along with 1,000-yard rusher from a year ago and fellow senior Brady Adkins.

Hunter Bush – a junior – takes over under center for Payne, and despite his lack of significant varsity experience is believed to have a strong throwing arm.

But the Blue Devils do have plenty of playmakers, primarily junior James Armstrong and sophomore Donevyn Woodson. 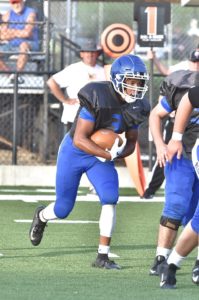 Against River Valley, Armstrong went off for 174 rushing yards on 19 carries with two touchdowns.

That win marked the ninth consecutive in the regular season for the Blue and White, dating back to week three of last season – a narrow 15-9 loss at Jackson.

The Ironmen occupied this week-three post the past two years, which Point Pleasant held before and now does again.

But by this time usually, the Big Blacks – an independent program in the Mountain State – will have had two games under their belts.

Not this season, though, as Point Pleasant is playing only a nine-game regular-season slate – as the Big Blacks couldn’t find a week-one opener at the end of August.

With West Virgina’s 11-week regular season, they had their scheduled bye for the year last week.

So the Blue Devils do have an advantage in having played twice, as they look to close the gap with the Big Blacks and move to 3-0, while securing a victory for VERY valuable Level 2 playoff points down the road.

Point Pleasant is considered the equivalent of an OHSAA Division II team, and is perceived to be set for another strong season – in spite of only nine scheduled games and replacing Payne.

And, it’s a blast from the past, as that would be another SEOAL charter member – the Logan Chieftains.

Only this time, with the SEOAL now defunct, Logan invades Alumni Stadium in Jackson as a non-league opponent – the first time that has happened since 1924 in the now 96th all-time meeting between the two.

Kickoff in the Apple City is set for 7 p.m.

Logan leads the all-time series 46-45-4, having finished with 26 SEOAL championships to Jackson’s 25.

However, points in the past few campaigns – including this one – have become a premium for the Chieftains, scoring just seven in each of their losses to Tri-Valley (35-7) and Teays Valley (10-7).

Last week’s loss – which was Logan’s ninth in a row – was especially heartbreaking, as the visiting Vikings won on the strength of only a 24-yard second-quarter field goal and an 88-yard kickoff return for a touchdown to open the second half.

The Chieftains trailed 10-7 and attempted a late game-tying field goal, but Israel Bookman’s 36-yard attempt doinked off the crossbar.

Caden McCarty has scored both of the Chiefs’ touchdowns, rushing for 181 yards on 38 carries, while quarterback Braeden Spatar has rushed for 138 yards on 41 attempts – while completing 11-of-16 passes for 78 yards.

The Ironmen, meanwhile, moved to 2-0 – after holding off Athens 31-26 in that important non-league encounter.

Jackson jumped out to a 19-0 halftime advantage, and actually held a 25-6 lead before the Bulldogs charged back – making it a one-score game with 38 seconds remaining.

The Ironmen offense improved from its sluggish season opener, as Jackson kept the ball on the ground and hammered at Athens with 28 of its 31 first-half plays coming via the run.

For the game, Jayden Spires racked up 123 yards on 24 carries, while Brice Graham gained 85 yards and a hat trick of touchdowns on 21 totes.

The Ironmen defense – especially against the run – was stout in the first half, as the offensively-challenged Chieftains are facing one of the top defensive units in all of Southeastern Ohio.

But look for Logan to bring a physicality that the Ironmen may not have seen against Athens or even Wellston, and if any coach knows Jackson’s Andy Hall well, it’s first-year Logan mentor Mike Eddy.

Eddy, the former four-year Gallia Academy coach, faced off against Hall for four years there – and defeated Jackson in the 2012 regular-season finale.

The Minford Falcons, for the second week to open this season, put up some  impressive offensive numbers – en route to a 2-0 start.

They aim to compile even more eye-popping statistics this week, but more importantly, earn another win.

That’s because the Falcons face their toughest test to date on Friday night, crossing the river into Greenup County to take on the 2-1 Musketeers.

A week after rolling Rock Hill 43-12 and amassing 311 total yards, the speed-driven Falcons finished with a massive 544 yards and 24 first downs against Chesapeake, capturing a 54-21 triumph. 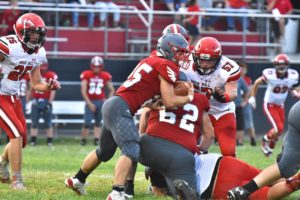 Ty Wiget, Minford’s standout senior running back, went off for a career-best 301 yards and four scores on only 10 carries – improving upon his 121-yard, two-TD, 14-carry performance against Rock Hill. 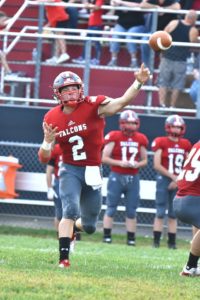 Elijah Vogelsong-Lewis – the left-handed quarterback – had those exact same rushing stats (14-121) against the Panthers, along with two passing touchdowns on 5-of-6 attempts for 94 yards.

Speaking of quarterbacks, the Minford defense faces the tall, talented and highly-touted Sammons this week.

Sammons stands six-foot, six-inches tall and weighs 200 pounds, and already is a signee with Marshall University.

The Musketeers fell to Raceland 17-14 in their season opener, as the Rams sealed the win with a late Sammons interception.

But Sammons and Greenup gained two wins since, prevailing in a 40-36 shootout at Fleming County (Aug. 30), before rolling Montgomery County with a 54-12 romp.

Against Montgomery, Sammons threw for three touchdowns and rushed for another.

He scored on quarterback sneaks for the Musketeers’ two trips against Raceland, then accounted for five TD against Fleming – three on the ground and two via the air.

The dual-threat Sammons is once again a stark contrast in offensive philosophies, as Minford has faced run-oriented OVC clubs Rock Hill and Chesapeake.

Greenup is equivalent to an OHSAA Division III program, which potentially means valuable playoff points for the Division V Falcons – assuming they fly the ‘W’.