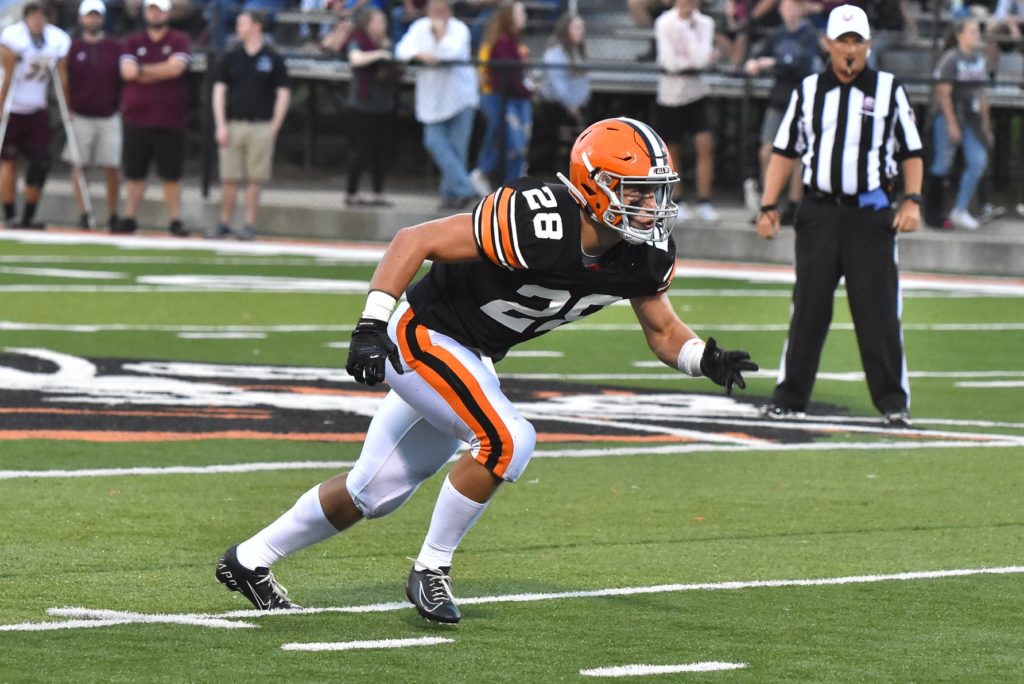 You have to appreciate Melvin Cunningham’s candor. 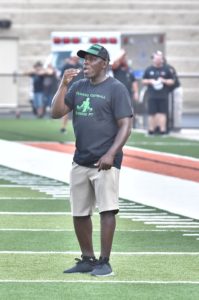 “Maybe I shouldn’t say this, but I can remember when I was playing football at Marshall. We go to the movies every Friday night, but we’re trying to sneak out and go watch Ironton play,” the Fairland fifth-year head football coach admitted. “It is what it is. If you are in this area, you know who the Ironton Fighting Tigers are, and now they are back to what the Ironton Fighting Tigers have been.”

Indeed, what tradition-rich Ironton is now is off to its first 2-0 start since 2012, but what it wants to be following Friday night is in first place in the Ohio Valley Conference.

Thus, the Fighting Tigers are on upset alert against the 2-0 Fairland Dragons, as Friday night’s matchup marks the OVC opener – and the early leg up on the remainder of the conference. 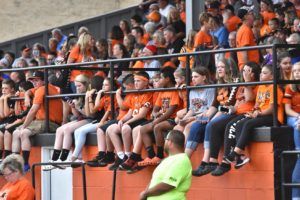 While both squads are 2-0, it’s Ironton’s opening reviews that are obviously drawing the majority of the attention. 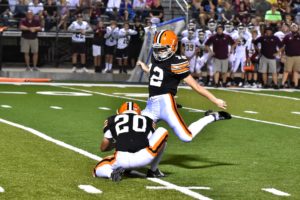 And, for the second straight week, after holding a 3-0 halftime advantage thanks to an Avery Book field goal, the Fighting Tigers prevailed in the second half.

While Wheelersburg (30-6 on Aug. 30) was a second-half rout, Ironton escaped with a 10-0 triumph over visiting Russell (Ky.) last week, as the solid Red Devils suffered their first loss of the season. 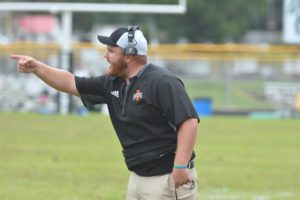 “Anytime you beat two clubs that are of that high quality, it’s always good for your program,” said second-year Ironton coach Trevon Pendleton. “But on the flip side of that, I don’t believe we’ve played our best football yet. As coaches, we have to put our kids in the best positions to succeed, starting with me. We need to do a better job of that, especially me as an offensive coordinator. Our defense has played phenomenal, and these guys have a great understanding of leverage, getting many hats to the ball, just being in the right position to make plays.”

The game’s only other score occurred with just three minutes remaining – on a 45-yard touchdown pass from quarterback Gage Salyers to Reid Carrico, combined with Book’s extra-point kick. 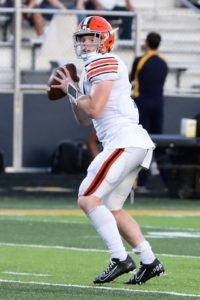 Salyers set up the touchdown by running for the first down on a fourth-down play, finding Carrico behind the defense and hitting him in stride at the 5-yard line.

While a Red Devil defensive back knocked the ball out of Carrico’s hands, it wasn’t until after he had already crossed the goal-line.

As the Red Devil defense keyed on the tailback Carrico, and limited Ironton to only 144 rushing yards on 37 carries, Salyers completed 9-of-16 passes for 157 yards – with Carrico catching four for 56.

But the true story of the second Fighting Tiger triumph was similar to its first – special teams and especially defense.

Russell had scored 88 points in its first two games, but against Ironton, anchored by standout senior defensive end Seth Fosson, the Red Devils punted five times and threw two interceptions – getting 67 of their 193 rushing yards on one play.

This week, Ironton faces a Fairland squad that is recognized for its fast-paced spread offensive attack, utilizing its athleticism and getting the ball to its athletes in the open field.

“Fairland has very good athletes, a ton of speed, they like to get the ball out in space,” said Pendleton. “Defensively, we have to tackle in space, trying to get all 11 kids to the ball. We have to play with great effort above all else.” 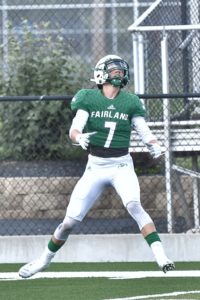 The Dragons defeated Tolsia (W. Va.) 34-12 in their season opener, as they have played the first two games without Reilly Sowards – their first-team Division IV all-Southeast District wide receiver from a year ago, who suffered a broken collarbone in the preseason.

But Ironton indeed is a different defensive animal, as evidenced by a 72-yard touchdown run by Wheelersburg’s Makya Matthews for its only points allowed all season.

The Dragons will need to make more big plays, and force the Fighting Tigers into defensive mistakes, if they are to have any amount of success on Friday.

Ironton – given the likes of Fosson, Nate Cochran and Junior Jones along the defensive line and Carrico and Dalton Crabtree at inside linebacker – is an iron wall on the interior.

Then throw in Salyers and Carrico and the fullback Fosson on the offensive side, and you have what Cunningham considers “the best team in the OVC”.

He also praised Pendleton as “the best coach.”

“Best team in the conference. They have the best coaching staff and the best players. They are the best team in our conference and everyone knows it. They are what they are, and we’re just blessed to have an opportunity to go play them at ‘The Tank’. We’re going to prepare and go down there and play the best team on Friday night,” said Cunningham.

Cunningham continued by admitting it would be an upset for Fairland to emerge victorious.

However, the Dragons did just that two years ago, winning 27-21 to become the first Lawrence County club to defeat Ironton at Tanks Memorial Stadium since 1961.

“It was just two years ago that Fairland came down to the ‘Tank’ and beat Ironton. A lot of those kids that are seniors now played as sophomores then. So you know they are going to be amped up to come down and try and knock us off again,” said Pendleton. “We don’t overlook any opponent. We definitely are preparing for a good Fairland team to come down here ready to go.”

So while the Dragons do have history on their side, they are facing THIS Ironton team that is chasing some history of its own.

The Fighting Tigers, since joining the OVC in 2015, are attempting to become the league’s first two-time champion – since the conference expanded to eight schools in 2016 to include Gallia Academy.

The league lost River Valley to the Tri-Valley Conference following the 2013 campaign, but quickly gained Gallia Academy for an even eight schools.

And, the Tigers are indeed the favorite for Friday night’s outcome.

“It would be an upset, I’m telling you it would be an upset. But we’ll be ready and we’ll be prepared to play. We don’t care who we’re playing, just put the ball down and see what happens,” said Cunningham. “We relish challenges and this will be no different.”

Upset or not, the winner will gain a leg up on the remainder of the OVC competition.

Both the Dragons (Waverly) and Fighting Tigers (at Ashland) take on non-league opponents in week four.

“Our OVC opener is early, but a win will give us a head start in the league race,” said Pendleton. “Our goal is to be 1-0 in league play and 3-0 overall after this week.”

Celebration of a century

This is the 100th season of Ironton football, and the Lawrence County Chamber of Commerce is set to honor the program’s history on Friday night at halftime. 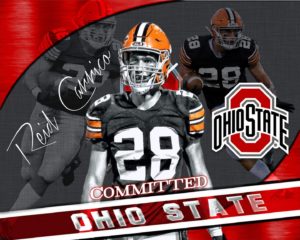 After 34 offers from Football Bowl Subdivision programs, Carrico – the Class of 2021’s top-rated inside linebacker in the country by 247Sports – has chosen to stay home.

He was the Buckeyes’ number-one linebacker target in all of Ohio.

“Reid is a very good football player, but more importantly he is a very mature and humble kid. His demeanor hasn’t changed at all,” said Pendleton. “He has been great throughout his entire recruiting process. We’re all very happy for him that he has made this decision and excited for him to have this opportunity.”

Carrico is actually a first-team all-Southeast District Division V running back from last season, and already has 42 carries for 190 yards and four touchdowns in the Fighting Tigers’ two games this year.

Via Ironton Football Faceook: Please say a prayer for Tayden Carpenter and Family as Tayden was injured in practice tonight and admitted to Bellefonte Hospital where he will be having surgery tomorrow to repair the injury. God Bless him!